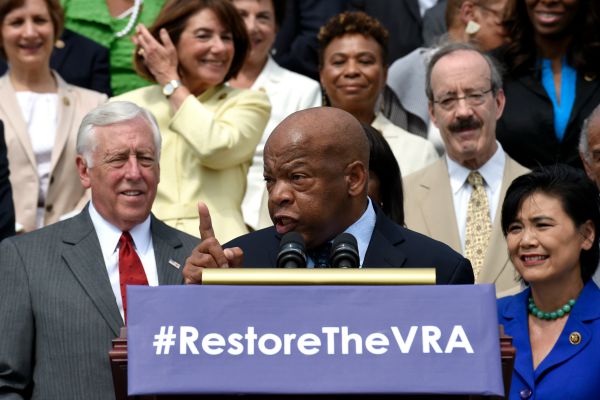 Thursday, Aug. 6, marks the 50thanniversary of President Lyndon B. Johnson signing the 1965 Voting Rights Act into law. The Southern Christian Leadership Conference (SCLC), the organization co-founded by Dr. Martin Luther King, Jr., will hold a Call to Action Rally at 9 a.m. on Thursday at the Martin Luther King Memorial on the National Mall.

The NAACP hopes to cap its Selma, Ala. to Washington, D.C. relay march, called America’s Journey for Justice, in the nation’s capital on Sept. 16.

Other celebratory activities are planned for different times.

Considered among the most far-reaching legislation in history, the 1965 Voting Rights Act removed many of the impediments to voting created by cities, counties and states that prevented many African Americans from exercising their right to vote under the 15thAmendment to the Constitution.

Dallas County, Ala., which includes the city of Selma, was typical.

As the Joint Center for Political and Economic Studies, a Washington, D.C.-based think tank, observed, in 1965, more than half of Dallas County was Black. However, of the county’s 15,000 voting-age African Americans, only 156 were registered to vote. By contrast, two-thirds of voting-age Whites were registered.

It took the savage beating of 600 protesters, including future U.S. Congressman John Lewis, by White law enforcement officials on April 7, 1965, known as “Bloody Sunday,” to stir the nation’s conscience against ballot box indignities. That provided the momentum for passage of the bill.

“Only in the wake of the Voting Rights Act did black voter registration in the South begin to approach that of whites,” the Joint Center said in a report titled, “50 Years of The Voting Rights Act: The State of Race in Politics.” It continued, “Five years after the passage of the Act, the racial gap in voter registration in the former Confederate states had closed to single digits.  By the start of the 1970s, the black/white registration gap across the Southern states was little more than 8 percentage points.”

In four of the 12 presidential elections since 1964, Black voters have turned out at higher rates that their White counterparts, according to the Joint Center. And the number of Black elected officials have increased from less than 1,000 in 1965 to more than 10,000 in 2015, including President Barack Obama.

While properly appreciating the accomplishments of the Voting Rights Act, we should not lose sight of the challenges that lie ahead.

“Since the 2010 election, 21 states have new laws making it harder to vote – ranging from photo ID requirements to early voting cutbacks to registration restrictions – and 15 states will have them in place for the first time in a presidential election in 2016. Those 15 states are: Alabama, Indiana, Kansas, Mississippi, Nebraska, New Hampshire, North Carolina, North Dakota, Ohio, Rhode Island, South Carolina, Tennessee, Texas, Virginia, and Wisconsin,”according to the Brennan Center for Justice at New York University School of Law.

And things are likely to get worse before the election.

The Brennan Center also noted, “As the early stages of the 2016 presidential race begin, state legislatures are already considering hundreds of laws that could determine voters’ access to the ballot. Since the beginning of the 2015 legislative session, and as of May 13, 2015, at least 113 bills that would restrict access to registration and voting have been introduced or carried over in 33 states.”

Many of these bills were introduced in the aftermath of the Supreme Court decision inShelby County v. Holder.On June 25, 2013, the court invalidated Section 4 of the Voting Rights Act, the provision determining which jurisdictions are required to pre-clear any voting changes with a federal judge or the Justice Department because of a history of racial discrimination.

To repair the court’s damage, Rep. John Conyers (D-Mich.) and James Sensenbrenner (R-Wis.) and Senator Patrick Leahy (D-Vt.) took the lead in introducing a bill that would, among other things, require states and municipalities with a history of repeated voting violations to pre-clear any election law changes with the Justice Department or a federal judge in Washington, D.C., just as had been the case before the Supreme Court’s recent action.

Of course, Blacks must also continue to fight against regressive changes at the state level.

Any euphoria created by the tremendous gains made since passage of the 1965 Voting Rights Act should be tempered by a stark reality cited in the report by the Joint Center for Political and Economic Studies.

It noted, “Based on the most recent data, African Americans are 12.5 percent of the citizen voting age population, but they make up a smaller share of the U.S. House (10 percent), state legislatures (8.5 percent), city councils (5.7 percent), and the U.S. Senate (2 percent).”

A report by the Leadership Conference on Civil and Human Rights concluded, “While the VRA has been enormously successful in eliminating some of the most egregious forms of discrimination, the reality is that discrimination in voting remains real and immediate.”

George E. Curry, former editor-in-chief of Emerge magazine, is editor-in-chief of the National Newspaper Publishers Association News Service (NNPA) and BlackPressUSA.com. He is a keynote speaker, moderator, and media coach. Curry can be reached through his Web site,www.georgecurry.com. You can also follow him at www.twitter.com/currygeorge and George E. Curry Fan Page on Facebook. See previous columns at http://www.georgecurry.com/columns.