Flint, Mich. Residents Mistreated Because of Race and Class 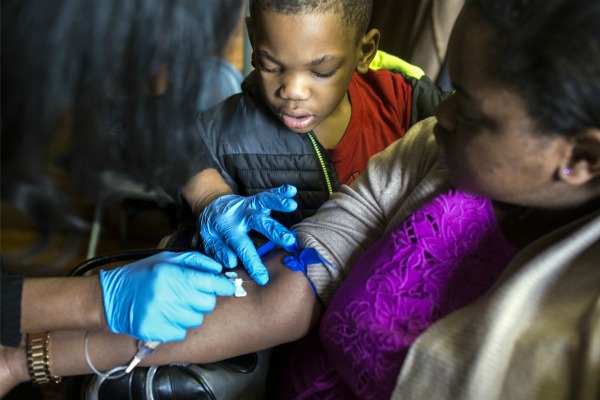 Let's face it: Contaminated water would not have flowed through the pipes of Flint, Mich. - certainly not for as long as it did - if the residents of the city of nearly 100,000 had been White and affluent instead of Black and largely poor.

In fact, if two-term Republican Gov. Rick Snyder had dreamed of that happening in Bloomfield Hills, he would have called a press conference the next morning to apologize for having such a nightmare.

But Flint is not Bloomfield Hills.

According to 2014 Census Bureau figures, Flint is predominantly Black (56.6 percent), has a poverty rate of 41.5 percent, which is nearly three times the national figure, and a median family income of $24,834.

Whether a family drinks or bathes in lead-contaminated water should not be determined by their race or income. Black and poor lives should matter as much as White and rich ones. Because that wasn't the case in Flint, children were exposed to unacceptably high levels of lead poisoning, which could lead to brain damage, learning disabilities and behavioral problems.

Everyone responsible for this fiasco should lose their job, be criminally prosecuted and if found guilty, serve time in prison and pay restitution.

Fortunately, the eyes of the nation are fixed on Michigan to see if justice will prevail. The National Bar Association, under the leadership of President Benjamin L. Crump, was scheduled to hold a town hall meeting on the water crisis Monday in Flint with its local and state counterparts.

Congressional hearings were scheduled for this Wednesday and Rev. Al Sharpton was planning to bring busloads of New Yorkers to monitor the proceedings. Unfortunately, most of our civil rights leaders are doing little beyond holding press conferences and issuing statements about the crisis in Flint. With February - a/k/a "Negro Employment Month" - now upon us, they will become even more distant.

Meanwhile, we continue to learn new, sordid details about this reprehensible tragedy.

From 2011-2015, Flint was in state receivership and went through four emergency managers appointed by the governor. In April 2014, in a move to save money, the state-imposed emergency manager decided to switch Flint's water supply from Lake Huron to the Flint River. Shortly, after the change, residents began to complain about the water's taste, color and odor. Stories were written about it in Flint and Detroit newspapers, but residents were repeatedly told they had nothing to fear. The city issued a press release saying, "Flint water is safe to drink."

While city residents were being targeted with that message, state employees were quietly getting another one.

As the Detroit Free Press reported, "In January of 2015, when state officials were telling worried Flint residents their water was safe to drink, they also were arranging for coolers of purified water in Flint's State Office Building so employees wouldn't have to drink from the taps, according to state government e-mails released Thursday..."

State employees were not the only ones receiving special treatment.

Writing under the headline, "10 Things They Won't Tell You about the Flint Water Tragedy," filmmaker and Flint native Michael Moore stated,"A few months after Governor Snyder removed Flint from the clean fresh water we had been drinking for decades, the brass from General Motors went to him and complained that the Flint River water was causing their car parts to corrode when being washed on the assembly line.

The Governor was appalled to hear that GM property was being damaged, so he jumped through a number of hoops and quietly spent $440,000 to hook GM back up to the Lake Huron water, while keeping the rest of Flint on the Flint River water. Which means that while the children in Flint were drinking lead-filled water, there was one - and only one - address in Flint that got clean water: the GM factory."

Last February, Miguel Del Toral, an Environmental Protection Agency (EPA) expert, wrote to one city official, "Given the very high lead levels found at one home and the preflushing happening in Flint, I'm worried that the whole town may have much higher lead levels than the compliance results indicated."

But no one in a position to change this was worried enough to step in.

A year ago, Detroit water officials offered to reconnect Flint to Lake Huron and waive the $4 million connection fee. But the emergency manager, Jerry Ambrose, declined the offer and residents of Flint continue to suffer to this day. Someone needs to pay for the state-sponsored serial ineptness.