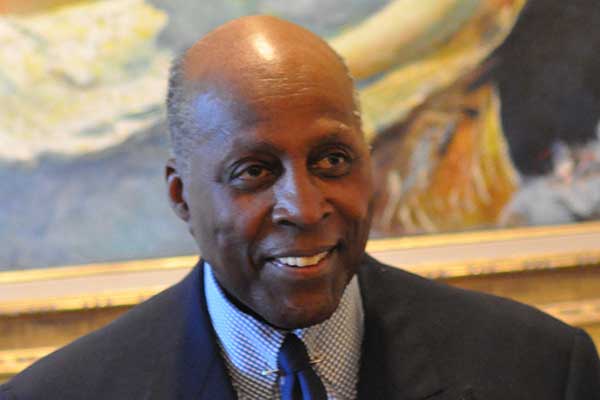 “Don’t just give us money, and don’t just show up for the Equal Opportunity Day dinner. That is not enough when you look at Black consumer power in this country. It’s not enough for you to come and shake our hands and be our friends. We want in.” — Vernon Jordan, National Urban League President 1971 -1981, on his message to corporate executives

The National Urban League recently released our annual report on the social and economic status of people of color, the State of Black America®. This year’s edition, “Locked Out: Education, Jobs & Justice,” was especially significant because it marked the 40th anniversary of the report, first issued in 1976 by Vernon Jordan.

In a video message Jordan recorded for the State of Black America® release, he recalled the tears he wept the night Barack Obama was elected President

“It dawned on me that my tears were not really my tears, but they were the tears of my grandparents and my parents. They were the tears of all those black people who toted that cotton and lifted that bale,” said Jordan. “The notion that Obama was going to be President, or that any black person was going to be President, is stunning.”
While we reflect this year on how far we’ve come since Jordan first issued the State of Black America®, Jordan’s own life is a vivid illustration of the progression of civil rights throughout the latter half of the 20th Century and into the 21st.

“He is kind of the Rosa Parks of Wall Street,” Harvard historian Henry Louis Gates, Jr., told Bloomberg. “He realized that the first phase of the modern civil rights movement was fighting legal segregation, but the roots of racism were fundamentally economic.”

According to the Bloomberg profile, published on the occasion of his 80th birthday last year:

“As a young man in Jim Crow Georgia, his first job was chauffeuring a White banker who was shocked that he could read. Now he counts some of America’s most wealthy and powerful citizens as friends and CEOs of Fortune 500 companies are proud to call him a mentor.”

Jordan himself often recounts what he calls his earliest political memory, listening to Georgia’s segregationist Governor Eugene Talmadge on the radio in 1943, when Mr. Jordan was only eight years old. “I have two planks in my platform,” Talmadge said. “N***rs and roads. I’m against the first and for the second.”

Persuaded by a recruiter to apply to an integrated college in the north, Vernon enrolled at DePaw University in Indiana over his parents’ misgivings.

“Here were Negro parents, both of whom had grandparents who were slaves, who to some extent were conditioned to the southern way of life,” Jordan told author Robert Penn Warren in 1964. “They could never quite adjust to the idea of their boy even being in Green Castle, Indiana, the only Negro in a class of 400 students, and they felt their boy, their baby, their prize, would be happier and have less frustrations if he went to a predominantly Negro institution.”

But his parents came to realize the significance of Jordan’s choice the night a White classmate came to stay at the Jordans’ home.

“In the middle of the night, my father got out of bed and came into my room and turned on the light and stood there with tears in his eyes, put the light out and went back to bed and said to my mother, ‘You know, this democracy thing is really here, and it’s right here in my house.’”

Having struggled in college due to his sub-standard segregated education in Georgia, Jordan determined upon graduation to pursue a career in civil rights. After receiving his law degree at Howard University, he returned to Georgia where he successfully challenged the University of Georgia’s discriminatory admissions policy.

Through the civil rights movement, he realized that economic empowerment would be the driving force for justice.

“In the 1960s, we conferred and defined the right to check into a hotel,” he said. “The 1970s were about providing the wherewithal to check out.”

We are grateful that Vernon Jordan has dedicated his life to that challenge, and we are proud to continue his legacy.