Adele Wins 3 Grammys and Breaks One in Half for Beyonce 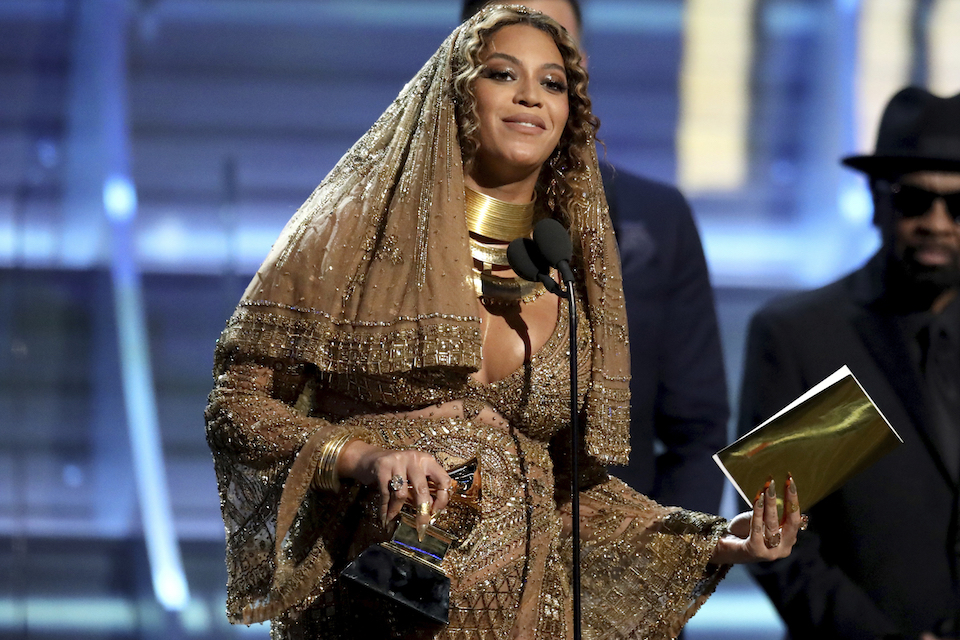 In an extraordinary moment between the music industry's top female artists, Adele beat Beyonce for three of the top Grammy Awards — then said her competitor deserved at least one of them.

The Grammys featured memorable performances by the likes of Bruno Mars and A Tribe Called Quest, big victories by Chance the Rapper and David Bowie, and some unusual flubs Sunday, but they were overshadowed by Adele's triumph and how she responded.

The Recording Academy did nothing to calm criticism that black artists are overshadowed in major awards by more conservative white musicians.

Adele's "Hello" won Grammys for song and record of the year and its creator flashed pride: she called it "my favorite song I've ever done."

Her win for album of the year was more of a surprise.

"25" was a commercial smash but Beyonce's "Lemonade" won wider acclaim as an artistic statement.

In tears, Adele thanked the academy for the award and poignantly talked about reclaiming a bit of herself after having difficulties with motherhood. Then she addressed Beyonce, praising "Lemonade" as monumental, beautiful and soul-baring.

"The reason I felt I had to say something was my album of the year is 'Lemonade,'" Adele said backstage later.

"She is my icon of my whole life."

She told of practicing a Spice Girls song for a school assembly growing up in Britain until her friends turned her on to Beyonce's singing on the 1997 Destiny's Child song "No No No."

"My view is kind of what the (expletive) does she have to do to win album of the year?

I felt this album showed another side to her that we haven't seen and I felt blessed to be brought into that situation."

If that's how Adele felt, many Grammy Award critics are likely to chime in.

One prominent black artist, Frank Ocean, did not submit his work for Grammy consideration this year and criticized the academy for giving its top album award to Taylor Swift over Kendrick Lamar last year.

Kanye West and Drake did not attend the Grammys this year.

Perhaps sensing it would be her last chance, she took the time to explain her thoughts behind "Lemonade" upon winning the Grammy for best urban contemporary album.

"My intention for the film and album is to create a body of work that would give voice to our pain, our struggles, our doubts and our history, to confront issues that make us uncomfortable," said Beyonce, who is pregnant with twins.

Blue Ivy, her 5-year-old daughter with Jay Z, was a scene-stealer in her own right as she wore a Prince-inspired outfit in the audience. She slipped into a crowd of musicians when Grammys host James Corden replicated a "carpool karaoke" skit.

As usual, the Grammy show was heavy on performance. As is less usual, there were a couple of flubs that reminded the audience it was a live telecast.

Adele called a halt to her George Michael tribute, asking the band to start "Fastlove" again.

"I can't mess this up for him," she said and apologized to the audience. She was warmly applauded at the end by fellow musicians, most of whom could relate to rough moments onstage.

During Lady Gaga's energetic pairing with Metallica — showing a tough girl side that wasn't on display during her Super Bowl  halftime show — duet partner James Hetfield's microphone malfunctioned and he couldn't be heard for two verses. He kicked the mic stand over and angrily threw his guitar when the song was done.

Mars had two show-stopping numbers, his own "That's What I Like" and a blistering Prince tribute, "Let's Go Crazy." On the latter, he even schooled The Time's Morris Day — and Day's mirror.

Impressive duets were turned in by Keith Urban and Carrie Underwood, the Weeknd and Daft Punk, and Maren Morris and Alicia Keys. Several artists joined in tribute to the Bee Gees as Barry Gibb, the band's only surviving member, was caught on camera singing along from the audience.

Bowie, who died of cancer in January 2016, won each time he was nominated for "Blackstar," his critically praised final album. The awards laid bare how Bowie has been neglected by the Grammys throughout his career.

He won a lifetime achievement award in 2006 but before that, his only victory was for a "Blue Jean" video in 1985.

Musician Donny McClaskin, who worked on "Blackstar," said Bowie had gotten wind before he died that the press thought highly of the disc.

"He was very pleased with how it came out artistically," he said backstage. "I was very surprised that he'd only won one Grammy for a video."

Twenty One Pilots won best pop duo/group performance for the hit "Stressed Out." They removed their pants when accepting the award — an odd reference to when they watched the Grammys at home in Ohio in their boxers during pre-fame days.

Sturgil Simpson, an album of the year nominee overshadowed in that category by Adele and Beyonce, won best country album for "A Sailor's Guide to Earth."