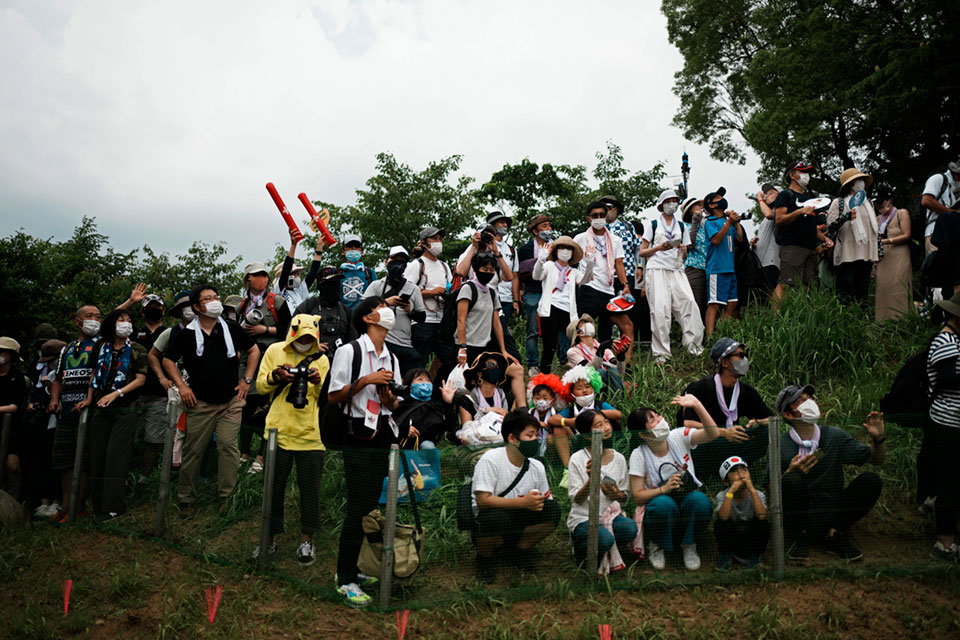 MISHIMA, Japan (AP) — The soon-to-be Olympic champion was in what cyclists derisively call “the pain cave,” empty lungs searing and legs feeling like dead weight. The climb he was on seemed interminable, the evil gradient sending him straight into the sky.

Hardly the time for Richard Carapaz to look fondly upon a near-naked man running beside him on the road.

Except ... did the stoic rider from Ecuador actually crack a smile?

Indeed, he did. That same stunt that overzealous fans pull in the Alps and Pyrenees during the Tour de France, where it might annoy Carapaz to no end, was actually welcomed by him in the Olympic road race. That's because the draconian measures taken by the organizers of the Tokyo Games to prevent the spread of COVID-19 have also prevented fans from the once-in-a-lifetime opportunity to see most of the world's best athletes perform on their own soil.

Or roads, as it were.

“It gave us a sensation of somehow coming back to normality, seeing the fans there,”

Carapaz said later. "I loved it.”

Technically speaking, a ban on fans for almost every event remains in place. Police and volunteer security guards are on almost constant patrol. But that hasn't stopped many locals from catching a glimpse of the action. 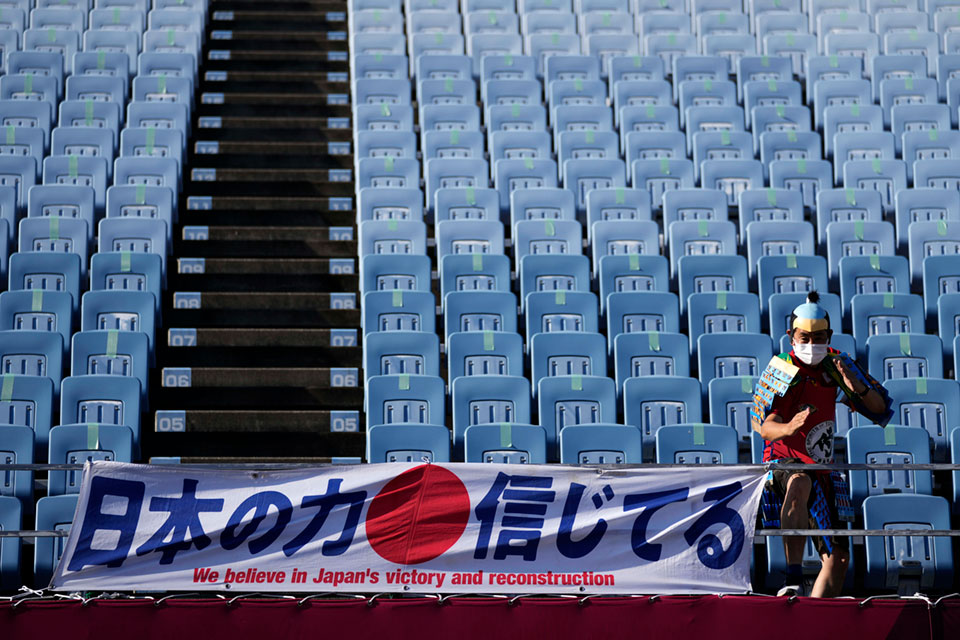 A fan poses for poses for a picture as he arrives at Miyagi Stadium for a women's soccer match at the 2020 Summer Olympics, Saturday, July 24, 2021, in Miyagi, Japan. (AP Photo/Andre Penner)

On the way to the opening ceremony, thousands lined the street to cheer for the buses, even though they had no idea who was riding inside. They held up signs that read “Welcome to Tokyo,” despite public sentiment that has run strongly against the staging of the Games. When drones rose above the stadium, they were oohing and ahhing and taking pictures, just as they would have been watching their beloved Shohei Ono competing in their national pastime, Judo.

Sixty miles to the east, where surfing made its Olympic debut, fans found their way to Tsurigasaki Beach. 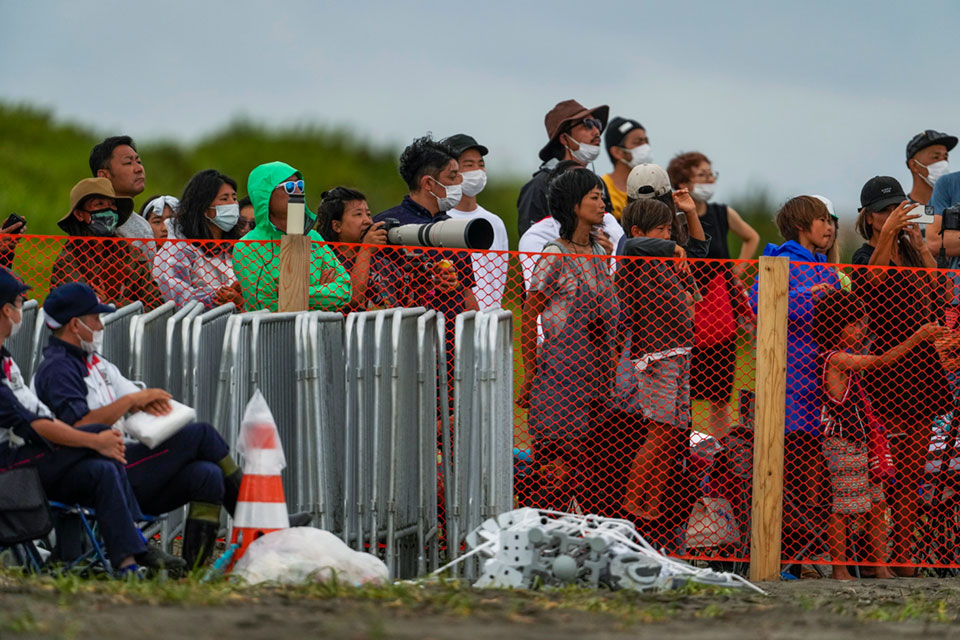 People watch from behind a security fence during the final day of the surfing competition at the 2020 Summer Olympics, Tuesday, July 27, 2021, at Tsurigasaki beach in Ichinomiya, Japan. The Olympic beach party that never was may be the only sore spot for surfing’s long-awaited debut that finished triumphantly this week. Some local Japanese fans and beachgoers did manage to find a way to lay eyes on the athletes and the competition site once the games began. (AP Photo/Francisco Seco)

Starting on the first day of the three-day tournament, dozens crowded around the plastic orange fence marking the security perimeter, their revelry building throughout the day. Far off in the distance, locals could see the beach and athletes moving into the water, along with coaches, journalists and volunteers at work.

Nobody seemed to mind the jetties near the surf zone that blocked much of the competition.

Over at Ariake Urban Sports Park, a dazzling stadium setup that would have seated 7,000 spectators for the Olympic debut of skateboarding, 8-year-old Ayane Nakamura was doing ollies on her “Peanuts” skateboard outside the venue.

She had come with her mother, Rie, and camped outside at 7 a.m. in hopes of seeing her hero, Yuto Horigome, and the rest of the men arriving for competition. When the security guards inevitably showed up to shoo away Nakamura and her friend, 8-year-old Sora Yamagishi, the sprightly youngster in the blue Nike skateboarding cap kept slipping away.

“Some people scold me several times,” Nakamura said, “so I have to hide when I see these people.” 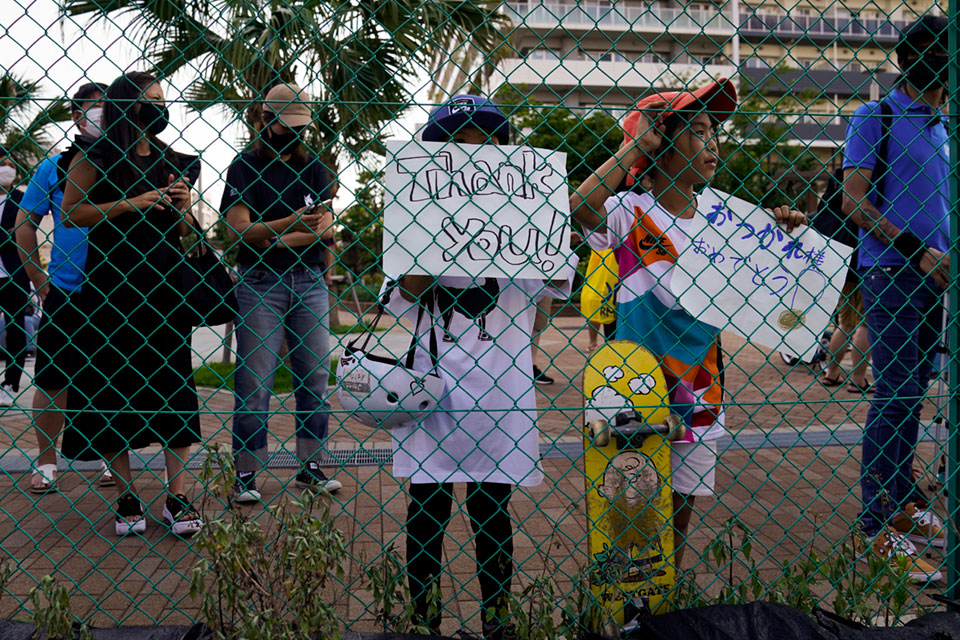 Two girls hold signs while waiting to get a glimpse of Yuto Horigome, the first Olympic gold medalist in skateboarding, outside the Ariake Urban Sports Park during the 2020 Summer Olympics, Sunday, July 25, 2021, in Tokyo. (AP Photo/Jae C. Hong)

Others managed to find vantage points to watch skateboarding, too, and they were richly rewarded. Not only did Horigome win the men's street event, Momiji Nishiya took gold and Funa Nakayama bronze in the women's event.

“I love skateboarding and follow all Japanese top skaters,” said Tamura, who works for a Tokyo staffing agency and managed to catch some of the kickflips and railstands through binoculars.

Were fans bummed they couldn't get in the venue? Maybe get a little closer to the athletes?

“To be honest,” Tamura said, “I couldn't get a ticket, so I am not that shocked. But in this circumstances, the decision makes sense, although it is sad.”

Shogo Miyamoto, a freelancer from Kyoto, also thought the decision to ban spectators was correct. But that hasn't stopped him from trying to breathe in the Olympic atmosphere. He arrived in Tokyo on the second full day of competition and tried to get a glimpse of a few of the venues, then planned to head down the coast to catch some sailing.

“I wasn't really interested in sports,” Miyamoto said. "But the Olympics is something that you wouldn't have in your home country twice in your life. Maybe not even once. That's why I wanted to come and explore the venues.”

There are still plenty of opportunities, too, for the most intrepid of fans.

With the right equipment and and a little bit of gumption, golf fans might be able to catch a glimpse of Masters champion Hideki through the trees lining the East Course at Kasumigaseki Country Club. At Odaiba Marine Park, where a few souls braved the rain to watch the triathlon this week, long-distance swimmers will compete in the marathon.

Speaking of marathons, the track and field marathon will take place next week in Odori Park in Sapporo, about 700 miles northeast of Tokyo, where temperatures should be slightly cooler. That could mean sightings of reigning Olympic champion Eliud Kipchoge, Kenya's marathon world record-holder Brigid Kosgei or American four-time Olympian Galen Rupp. 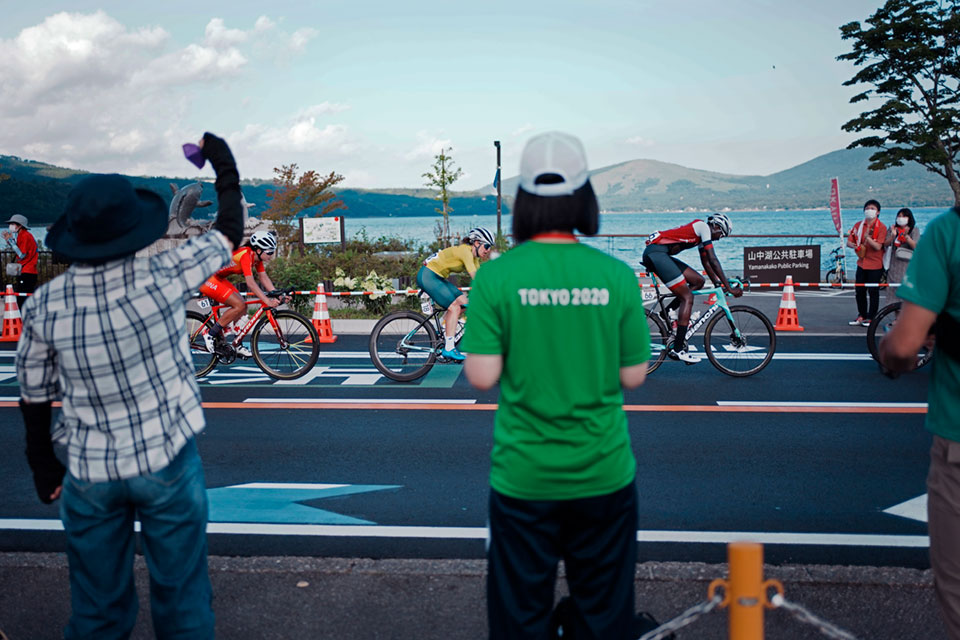 Those unwilling to run afoul of the law can catch the final week of cycling, which will shift to the velodrome in Izu for track cycling. Its location in the Shizuoka prefecture, like the mountain bike course and the road race finish at Fuji International Speedway, falls outside the spectator ban, meaning up 1,800 people will be able to squeeze inside.

“Initially I was quite gutted. Without fans completely would have been different,” said Britain's Laura Kenny, a four-time Olympic champion in cycling. “Would they have played crowd noise? Could they have chosen the London crowd?"

"It wouldn't have felt as exciting as it could have been. I'm glad to have some people coming in.”