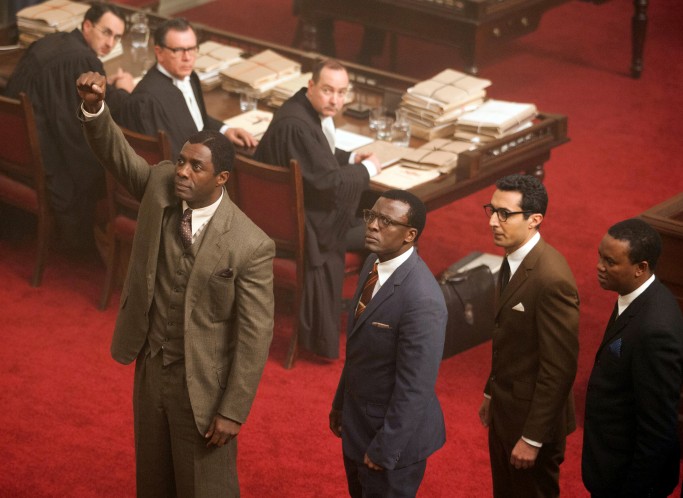 Nelson “Mandiba” Mandela (Idris Elba) secretly started writing his autobiography “Long Walk to Freedom” while still serving what he had every reason to believe might very well be a life sentence on Robben Island. The lawyer-turned-spokesman for the outlawed African National Congress had been convicted of treason for trying to dismantle South Africa’s racist regime.

But he was indeed freed following 27 years in prison of imprisonment when the bloody civil war was on the brink of bringing an end to Apartheid. At that point, Mandela assured the apprehensive white minority that despite the fact that, “Fear has made you an unjust and brutal people, when we come to power, there will be no revenge.”

Soon thereafter, he was democratically elected the nation’s first black president, assuming the reigns of power in 1994. And that transition to majority rule did prove to be smooth, with the help of pardons for crimes against humanity being granted by the Truth and Reconciliation Commission to guilty parties from both sides of the conflict.

Still, since Mandela spends the bulk of the movie behind bars, much of the action revolves around his wife Winnie’s (Naomie Harris) efforts to raise their children while serving as a leader of the movement in her husband’s absence. Sadly, the decades-long separation eventually took a toll on their marriage, between the denial of conjugal visits and Winnie’s resorting to ruthless methods to silence suspected snitches.

This film easily eclipses a biopic covering the same subject-matter called Winnie Mandela. Released just a couple of months ago, that relatively-pathetic disappointment co-starring Terence Howard and Jennifer Hudson as Nelson and Winnie, respectively, was marred by the protagonists’ atrocious accents as well as by a godawful script.

By contrast, this inspirational adaptation of Mandiba’s autobiography more than does justice to the legacy of the triumphant freedom fighter who made so many selfless sacrifices on behalf of his people.

In English, Afrikaans and Xhosa with subtitles