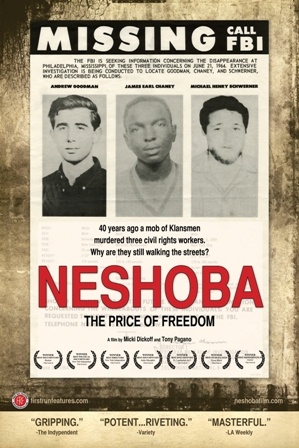 Philadelphia, PA., might be world renowned as the City of Brotherly Love, but Philadelphia, Miss., has only been associated with bigotry ever since June 21, 1964. That was the fateful day that three civil rights workers were murdered there by a lynch party comprised of hate-filled Ku Klux Klansmen.
The facts, which were never really in dispute, are as follows. While changing a tire after their car had broken down, Michael Schwerner, James Chaney and Andrew Goodman were arrested for speeding and held without bail by Sheriff Cecil Price. The three had been passing through Philadelphia after investigating the firebombing of a Black church in the nearby town of Longdale.
Repeatedly ignoring his prisoners' requests to exercise their Constitutional right to call their lawyer, the bigoted sheriff instead tipped off his fellow Klansmen that he had apprehended some of the outside agitators who had recently been trying to register blacks to vote all across Neshoba County. Then, around 10 PM, he essentially turned the trio over to a posse of 20+ vigilantes who proceeded to shoot Schwerner and Goodman at point-blank range, and to castrate and otherwise torture Chaney alive.
Most of the participants in the gruesome slayings were so brazen that they bragged about what they'd done to anyone who would listen. They felt perfectly comfortable in this regard because of a Southern code where blacks knew their place, and Caucasians either sympathized or knew better than to try to bring the perpetrators to justice.
After all, most of the pillars of the community were members of the Citizens Council, a fraternity of well-connected lawyers, bankers, politicians and other civic leaders who secretly made it their business to back the Klan financially and legally in order to preserve the "white way of life." Thus, it was no surprise to the locals that no one was held accountable for the killings for over 40 years.
That decades-long quest for justice is the subject of Neshoba: The Price of Freedom, a documentary dedicated to truth and reconciliation co-directed by Micki Dickoff and Tony Pagano. For in this earnest expose' they interview not only the surviving relatives of the three victims, but both black and white citizens of the Philadelphia community. That effort reveals that although many have belatedly come to embrace the notion of universal brotherhood, some still remain inveterate racists willing to go their graves waving the flag of intolerance.
A cinematic sifting through the ashes of Mississippi smoldering!

See a trailer for Neshoba