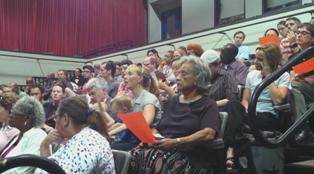 About 50 Boise and Eliot neighbors gathered at Self Enhancement Inc., Aug. 11, to discuss what could be done to improve safety in the neighborhood. Neighborhood residents said the recent rise in gang activity and crime had left them looking for answers. 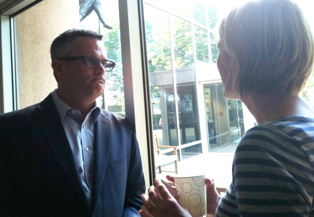 What the neighbors learned in that meeting could help unite the entire community across race and class lines behind an effort to support Portland's struggling families, children and young people. That's according to Celia Howes, a defense attorney who lives in the neighborhood and helped plan the meeting. 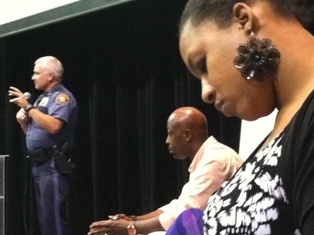 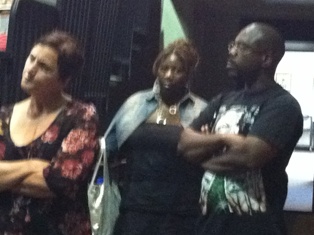 Howes said neighbors may not have left the discussion with a clear idea of how to move forward, but they did leave with more information about how to get involved with prevention efforts, such as the 11:45 Movement, spearheaded by several local churches. Youth worker Royal Harris, Bishop Marcus Pollard and other speakers had made a strong impression, Howes said.

"I had several neighbors say they would join the walking ministry," she said, adding that she was interested in helping children and teens stay on track. "If you provide these kids with a sense of community, if you give them resources, food, education, a sense of family and role models, you can make a big difference," she said. "From the reading I've done, every dollar you spend on that is equal to $50 spent on law enforcement." 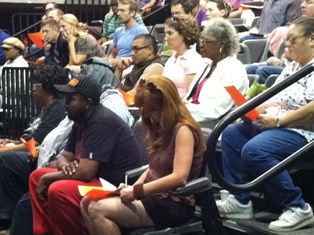 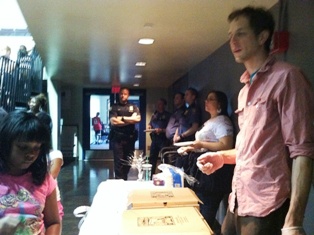 Audience members kicked off the meeting by raising concerns about crime – especially drug dealing, illegal gun use and gang violence. Some voiced a need to understand why gangs exist and what efforts were being made to prevent people from reoffending, when they returned to the community after spending time in jail. One woman said in the 1990's her neighborhood saw shootings daily, so current problems seem minor. A man who also identified himself as a longtime resident, said youth need opportunities for productive activity.
"What is there for young adults to do? As the economy gets worse there is less to do. There's no employment and no hope. They have nothing to lose."

Arrests Alone Won't Stop Problem Say Police
Mayor Adams said this was why the city and county had created 1600 jobs for young people this summer. He said the city's newest gun law, which demands stiff federal penalties for illegal gun use, is aimed at reducing the prevalence of guns among youth and adults with criminal records.
Along with several other speakers, Adams advised residents to band together and walk their neighborhoods. Being visible in your community, getting to know other neighbors, picking up trash and cleaning graffiti all sends a message that you care about your neighborhood, he said.
"These foot patrols make a difference," he said. "You might not think they do, but if you are a criminal you don't want to be caught. You are not confronting people; you are not out there investigating; you're just out there being visible," Adams said. "I'm going to say to you, you can affect people just by being present and talking to them."
Longtime Portland Police Officer Capt. Walsh said his experiences during the 1990s taught him that we can't "arrest our way out of the problem."
"I tried my darndest, but we're back here again," he said. "And a lot of the people I'm chasing are the sons and grandsons of people I was chasing back then."
Walsh explained that every city in the country is dealing with similar issues and what's known is that police need community support to be successful. For example, one suspect in a recent shooting has not been arrested because community members who could identify him as the shooter have refused to testify.
Discussing the use of the emergency and non-emergency numbers, Walsh asked residents not to be angry if they are asked to call back on a nonemergency number. Police are not able to respond to all problems as emergencies, he explained. Drug deals in your street are illegal, but because they are over quickly, police can't usually arrive in time to arrest a dealer. 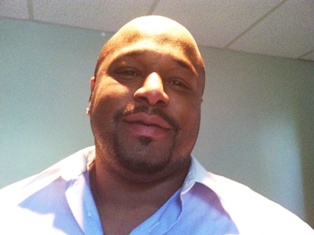 Food, Jobs and Mentorship Can Prevent Violence
Alan Bell spoke about his experiences with gangs. As a youth he hung out with a gang, he said, and he knows plenty of people who are still involved. But Bell said it's a mistake to classify people as simply 'gang members,' because it dehumanizes them and doesn't solve the problem. First and most importantly, they are people –people with few resources who are struggling to survive, he said.
"These are our family and friends."
"Nobody wants to stand on a street corner all day and sell drugs," he said. "If they had jobs, I'd say 20 percent , not all, but 20 percent of the shootings would stop immediately.
"It shouldn't be like a war and it shouldn't be reactive," Bell said. "How about we give people more SEIs and take more of a proactive approach. How about approaching people, giving them services and trying to help?
"Some people, you have to really grab their hand and pull them out."
Bell encouraged neighbors to say hello to the young people in their neighborhood, and reach out to them, even if they think they are involved in gangs.
"I advise you to get to know them," he said.
"You could see me at any given time with a car full of gang members," he said.
"We're probably going to eat because they haven't ate."

Business Owners Have a Lot to Contribute 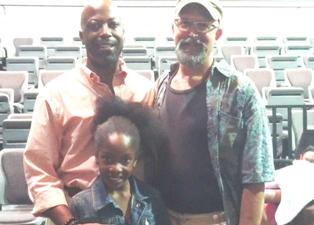 Other speakers, including audience members, urged neighbors to build community by reaching out and helping youth. A woman who identified herself as a counselor at Inverness jail said people need to understand that people leaving jail have almost no help to become productive members of the community.
Royal Harris, who works with young offenders through Cascadia Mental health and Multnomah County Department of Justice, said looking at the problem simply from a public safety perspective won't get to the root of the issue with teens. Gangs offer an alternative family and support system to teens who need them, he said.
"What they are seeking is family," he said. "These are their neighborhoods and these are their communities, and what they need is community."
Harris challenged the business community to step up as mentors to young people who want to be successful but have few resources to draw on.
Pastor George Merriweather, explained how the churches have come together to support families, children and teens through the 11:24 Movement. And Bishop Pollard invited the audience to join them.
"We need you, we need your presence," he said. "This is a salt and pepper community and we need salt and pepper to step up and solve this problem. It's the values we hold as a community here in this city, this state, this neighborhood that will unite us."