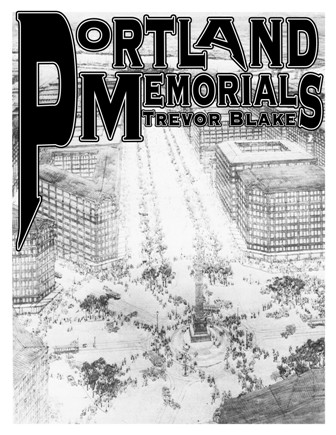 Portland writer Trevor Blake's book, "Portland Memorials," is a compilation of historical markers to be found by walking through the downtown area. Sound simple? Consider that the author must at some points have practically crawled on his hands and knees to transcribe dates and names from the thousands of "plaques, buildings, statues, benches and fountains" that were grist for his investigations. He even discovered that a few memorials touching on Black history were likely thrown into the Willamette River. The Skanner News traded electronic letters with Blake to get his story on how, and why, Portland has chosen to remember its past.

The Skanner News: Trevor what made you want to put this book together?

Trevor Blake: I wrote Portland Memorials for three reasons.  The first reason is an echo of one of the memorials found in the book.  The Shemanski Fountain is located at the north end of the South Park Blocks.  It was a gift to the city by Portland shopkeeper Joseph Shemanski (1869-1951) in 1926.  Shemanski gave the fountain to the city "to express in small measure gratitude for what the city has done for me."  And that is exactly the reason I have written Portland Memorials.  I moved to Portland in 1992 and the city has given me as many opportunities, experiences and challenges as anyone could ask for.  The second reason is writing a book is a good way to learn a subject, and I wanted to learn more about the architecture and history of Portland.  The third reason is it provided some good exercise for the legs and the brain.

TSN: How did you research it, how many memorials are contained in it, and how long did it take?

Blake: I researched Portland Memorials the old fashioned way: I used my feet and my eyes.  Over a three year period I walked around every block in downtown Portland, usually two or three times, and whenever I found a memorial I wrote down what it said and where it was using a pencil and paper.  No special training or equipment was needed.  There are a few websites and books that might have helped but I decided to see for myself what was there, and in doing so I've documented many thousands of memorials that are found in no other resource.  I thought it would be a fine project for a Summer and include a few hundred items.  It is a fine project, but it took three years and includes thousands of names.  The best way to find a particular memorial is to look in the index, then find that page, then go to that memorial.

TSN: Can you talk a little bit about the Portland memorials that touch on the African American experience here?

BLAKE: I'm glad you asked this question.  One of the most lively memorials downtown is for the Golden West Hotel at 707 NW Everett.  This hotel was owned and frequented by African Americans from the early 1900s onward.  Of all the memorials I found, this is the only one that includes photographs, text and a recording - the blind can enjoy and learn from this memorial, making it accessible to even more Portland citizens.  The Walk of the Heroines on the campus of Portland State University includes the name of nearly thirty Black women civil rights pioneers.  Strangely enough, there are three civil war cannons in downtown Portland.  Two are in Lownsdale Square and were taken from Fort Sumter, the third was melted down and made into the church bell of First Presbyterian Church.  There are some sidewalk plaques in the Old Town area that honor how the Chinese community has interacted with other communities, and one of them (on NW Flanders between 3 and 4) talks about how the Chinese and African American community mingled at the Royal Palm Hotel.  There used to be a memorial park downtown dedicated to the Liberty Ships built by many African American workers in Portland during World War Two, but when that property was converted to condominiums most of what was in the park was thrown into the Willamette River.

TSN: What do you want to come from this book?

BLAKE: I want people to read about a memorial and go see it for themselves.

Not to read about it and forget it, not look it up online, but to go see it for themselves.  It's a reminder that each of us will just be a memory some day and that we'd best make hay while the sun shines.

TSN: What's the most important thing about this town that you hope people take away from reading 'Portland Memorials'?

BLAKE: Portland has preserved much of its history, and that can't be said about many cities.  Sometimes the preservation was by design of the city leaders, but often it was the efforts of individuals.  In the 1950s many older buildings were torn down for being old fashioned.

The decorative iron work on the sides of some of these buildings was, shall we say, 'privately preserved' by individuals who couldn't stand to see the art destroyed.  Decades later, when Portland again appreciated its history, these works were returned to the city and can be seen in the Saturday Market area.  I hope Portland Memorials is read for years to come by those who care about our city's history.

or any other of your writings?

BLAKE: My book can be purchased in print or for Kindle at this address http://ovo127.com/ovo/ , where there is also a free sample chapter to download.