By Helen Silvis of The Skanner News
Published: 18 January 2012 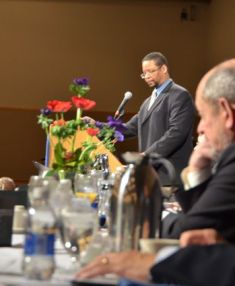 Black Americans need and deserve real economic change. And the way forward is through investment in entrepreneurship and technology. That was part of the powerful message delivered Jan 16, by Mike Green, the Keynote Speaker at The Skanner Foundation's 26th Annual Martin Luther King Jr. Breakfast.

"Dr. King envisioned a time when America would invest in Americans of all races," said Green, co-founder of the economic development hub The America21 Project. "When all races would be empowered to work together to create a strong nation that is not only economically strong, but also strong in its character, exemplified in the dignity it extended to all its citizens."

In his address, Green announced the formation of a new group to explore what can be done in Portland: the Portland Urban Innovation Roundtable. And he called for leaders to take on that challenge. 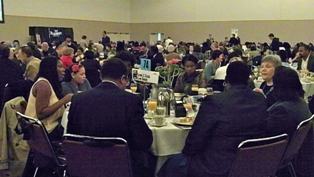 "The Portland UIR needs committed leaders across the spectrum of the established economic ecosystem and those from the economically disconnected sectors, to work together and with The America21 Project to create a culture of urban innovation that produces exponential economic impact in disconnected communities across Portland."

About 1000 diverse Portlanders packed into the Oregon Ballroom in the Convention Center to celebrate Dr. King's life and achievements, and to hear Green speak in his honor about wealth creation. 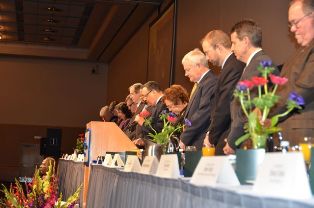 Bobbie Foster, The Skanner's executive editor was the emcee for the event. Les Femmes, the Urban League's Young Professionals  and many others volunteered to make the event a success. The convention center staff served up crab patties, topped with poached egg in béarnaise sauce and a waffle. Portland Community Media and the North Portland Multimedia Training Center recorded the event live for broadcast on Channel 30. 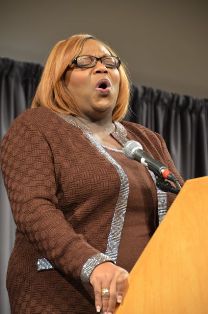 Madam Wendy Jackson led the singing of the Black National Anthem 'Lift Ev'ry Voice' and also delighted the audience with the classic, "I've come too far to turn back now." Pastor Crayton Jackson of Daniels Memorial Church of God in Christ gave the invocation and the benediction. 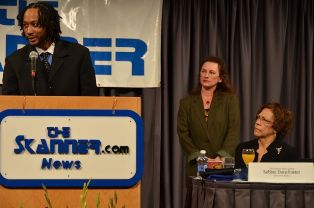 The Skanner's news editor, Lisa Loving, presented the Drum Major for Justice Award 2012 to Karanja Crews, a teacher and the inventor of Journey to Freedom. Journey to Freedom started out as an interactive game designed to engage Black students through teaching the history and culture of African Americans. From that small beginning Journey to Freedom has become a program that works especially well with young Black men to encourage reading and promote academic success .


Accepting the award, Crews, who has taught at Jefferson High school, but is now at King Elementary, said he stands on the shoulders of those who came before him, not just Martin Luther King Jr, and other national civil rights leaders, but also the local heroes who blazed the civil rights trail in Portland, people like Avel Gordly and Ron Herndon. 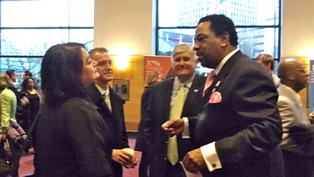 Green, a former CNN journalist, now lives in Oregon.  He blogs for the Huffington Post, but his main focus is the America 21 Project, which he co-founded with economic development expert  Johnathan Holifield and biotech entrepreneur Chad Womack.  The project aims to link Black Americans to the structures that create wealth in America. (You can find out more at the website, blackinnovation.org) 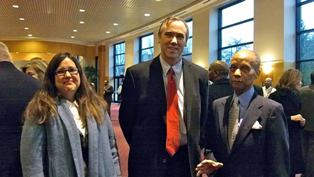 "The lack of inclusion and economic parity in the private sector, along with lack of access to capital, severely limited options for Black Americans to generate or create wealth five decades ago. The same problem exists today," Green said.

"Our strategy is to tell the story of the Innovation Economy, its challenges and opportunities, in a manner that's easy to understand, using three core pillars:
· STEM  (science technology, engineering and math) education and  workforce development
· Entrepreneurship, especially high-growth entrepreneurship
· Access to Capital and Capital Formation 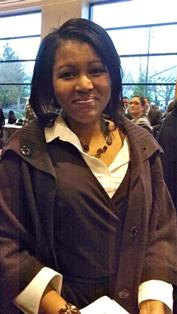 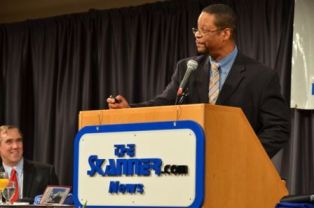 Our approach is to follow the solution provided by Dr. Martin Luther King. We seek to connect the disconnected and develop strong relationships across the racial and economic divide.

Unfortunately, as Green explained, Black Americans have been excluded from the wealth creation strategies that have worked well for other Americans. And unemployment has remained twice as high in Black communities as in White – the same as during Dr. King's lifetime.

"Today we see the economic consequence of decades of isolation and disconnect due to White businesses and majority corporations keeping Black businesses and entrepreneurs at arm's length. With few opportunities to connect to those in our society generating wealth, Black America has lagged in its ability to compete and thrive economically, and the wealth gap has widened. As President Obama has said, "it isn't class warfare, it's math." For all Green's speech click here 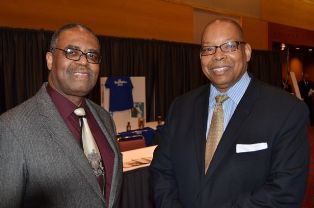 Nationally Green's organization is partnering with Rutgers Business School, CNN, Open Government TV and a growing group of potential investors, entrepreneurs and educators. The University of Portland hosted a screening of a CNN documentary on the issue. At the breakfast, Patrick Quinton, executive director of the Portland Development Commission, said the PDC will be interested in supporting the initiative as it develops.

After getting inspired by Green's speech, scholarship sponsors presented awards worth $1000 each to about 20 students, who had graduated from local high schools. Some students have received multiple scholarships through the foundation, helping them as they progress through college and university. 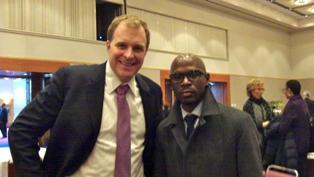 For photos of the students receiving their scholarships click here

Wrapping up the event was The Skanner Publisher, Bernie Foster. As well as thanking all the sponsors and volunteers who made the event possible, he urged legislators to make sure that federal resources help those who need it most, including communities of color. 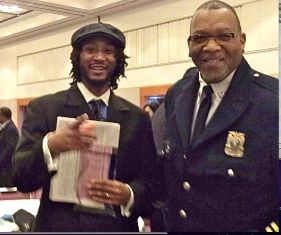 "Equity must be at the heart of the Columbia River Crossing contracts," Foster said. " Senators, state representatives: You're the ones who bring in these resources. So you must keep those administrators accountable, by asking the hard questions. Are these resources reaching my constituents of color? YOU are the ones who must make equity happen."

Foster pointed to the desperate need for jobs and the dispiritingly high rate of poverty for Black children in Oregon –50 percent.

And he signed off by remembering Rob Ingram, who led the Office of Youth Violence Prevention until his too-early death last November. 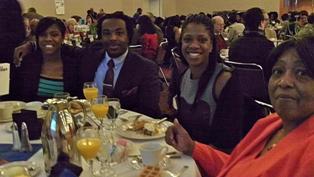 "He left us too soon, but he gave us the right words to celebrate Dr King," Foster said. "In Rob's words: 'Let's get to work.'"