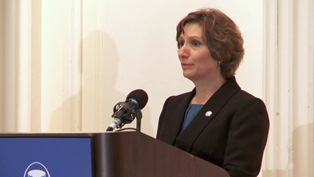 PORTLAND, Ore. (AP) -- Oregon Democrat Suzanne Bonamici will be the newest member of Congress after a decisive victory in a special election to replace former Rep. David Wu, who resigned in a sex scandal.

"I really believe that the election reflects that my priorities and the district's are aligned," Bonamici told The Associated Press after a victory speech Tuesday night to her supporters in downtown Portland. "And I'm thrilled with this opportunity."

Bonamici, 57, said she expects to speak with congressional leaders Wednesday and find out when she'll be expected in Washington.

National Democrats poured more than $1 million into the Portland-area district, determined not to drop another safe seat after losing a New York district left vacant by Anthony Weiner, who acknowledged sending provocative text messages and resigned.

"If you don't have the resources to respond to it, it becomes very difficult," he told The Associated Press.

Cornilles made his second bid for the seat after losing to Wu by a similar margin in 2010. He said he wants to spend time with his family before deciding whether to make a third try.

Bonamici won't get much of a break before gearing up for the next campaign. She'll face a May 15 primary before the general election on Nov. 6.

The district will become marginally friendlier for Republicans in the next election, when new district boundaries will leave out a swath of Democratic voters.

No date has been set for Bonamici to take office, her campaign said. Once she does, she will focus on helping constituents who haven't had a representative solve problems with the federal government, she said.

Wu stepped down from Congress in August after a newspaper reported that a young woman accused the seven-term Democrat of making an unwanted sexual advance at a Thanksgiving dinner. His resignation capped months of reports about Wu's bizarre behavior that included widely panned photos of the congressman wearing a tiger costume.

Bonamici emphasized her experience in the Legislature and as a lawyer working on consumer protection issues at the Federal Trade Commission.

Late in the race, Cornilles tried to tar her with the scandal that took out Wu. He also dinged her for votes that raised taxes.

Cornilles promoted his business experience and he downplayed his GOP affiliation in a district where Democrats outnumber Republicans. But he couldn't overcome Democrats' work to discredit him.

Democrats and their allies pummeled him with television ads that attacked his business credentials, highlighted his opposition to abortion and tried to align him with the tea party.

"This election is a win for middle class Oregon families who want someone to fight for them," said Rep. Steve Israel, D-N.Y., chair of the campaign committee for House Democrats, which spent $1.3 million on the race.

The district includes downtown Portland and the suburbs in Washington County, as well as smaller communities in Clatsop, Columbia and Yamhill counties.

Democrats have represented the district for nearly four decades. The last Republican to come close to a victory was Molly Bordonaro, who came within 3 points of defeating Wu for what was then an open seat.

"It's a pretty exciting night here at our celebration," Bonamici told the AP late Tuesday. "Now the real work begins."