Monica Foster of The Skanner
Published: 23 May 2007 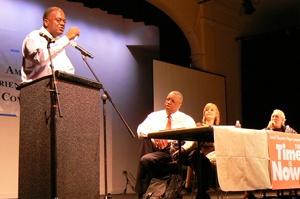 Former Seattle Police Chief Norm Stamper calls the "war on drugs" a "war on people." And most of those people are people of color.
"When Richard Nixon declared the war on drugs in 1970, after all these years we've now spent $1 trillion on an un-winnable, from my point of view, entirely immoral war," Stamper told a group of about 500 people at a recent forum to discuss the effects of the "war on drugs" on people of color.
"It was not a war on drugs that was declared in 1970," Stamper said. "It was a war on people, on young people, people of color," Stamper said.
University of Washington sociology professor Katherine Beckett, who has studied racial disparities in local drug enforcement, also spoke at the May 17 forum, titled ""The Time is Now to End the War on Drugs."
Beckett says that, while the majority of Seattle's drug users and sellers are White, more than 78 percent of those arrested on drug charges are Black or Latino. Beckett points out that Seattle's racial disparity in drug arrests is nearly 11 times higher than that of similarly-sized cities.
There are 2,500 inmates in King County and 40 percent of those inmates are African American – but, statewide, Blacks make up only 3 percent of Washington's population.
"It's hard to make the case that the war on drugs is helping people," Beckett said. "Police tend to go make their arrests where drugs are known to be."
Stamper, a member of LEAP (Law Enforcement Against Prohibition) knows all about these disparities. Stamper was a police officer for 34 years and served as chief of police from 1994 to 2000. In his recent book, "Breaking Rank," Stamper says the war on drugs unfairly targets minorities, is costly, ruins families and leads police to make more arrests for drug  offenses than more serious crimes. Instead of incarceration, Stamper says drug use should be treated as a public health issue with a focus on treatment and regulation.
"Those that are addicted to drugs including alcohol are in need of help and medical assistance, not a jail cell," Stamper said. "Until we recognize what we are doing to our own people we will never achieve the quality and kind of relationship that represents an authentic partnership between community and police."
John Page, a recovering addict who works with the Village of Hope and People's Institute Northwest, spoke at last week's forum and said the problems surrounding drug use affect the entire community.
"We need to have an honest dialogue, ask ourselves some tough questions and have an honest dialogue on this issue and that's why I'm here," Page said. "It's not just the addict that's affected but the entire family structure."
The United States has the highest incarceration rate in the world. One quarter of those prisoners are in for drug crimes.
Of the 1.8 million non-violent drug offenders in this country's prisons, the vast majority were arrested for possessing less than $50 worth of drugs and face between three and eight years in jail.
According to a 2006 ACLU report, African Americans make up 15 percent of drug users; 37 percen t of those arrested on drug charges; 59 percent convicted; and 74 percent of drug offenders sentenced to prison.
"The men and women of color in prison, many convicted on non-violent drug charges, are the greatest casualty of the war on drugs," King County Councilman Larry Gossett said at the May 17 forum. "African Americans make up more than one-third of the drug arrests and over half of those convicted on drug charges — even though we make up only 15 percent of the drug users in America. We need to start talking about alternatives to incarceration for non-violent drug offenses."
Stamper said the war on drugs was at the bottom of his priority list when he was chief of Seattle's police.
"At the top was creating safer, healthier communities and preventing violent crimes," Stamper said.
The former police chief said the drug war "has produced death, disease, crime and addiction ... it has intensified the problem."
And yet, because of the war on drugs, Stamper pointed out, criminal justice matters take up 70 percent of King County's $625 million budget and costs United States taxpayers more than $69 billion every year.
"We need to look at ways to prevent crime and when it comes to drug policy; we need to end the war on drugs now," Stamper said. "We need to replace prohibition with a regulatory model predicated on a public health system."

Katherine Beckett's report can be found at www.soc.washington.edu/users/kbeckett/Enforcement.pdf.
For more information on how the "war on drugs" has affected people of color, visit LEAP (Law Enforcement Against Prohibition) at http://leap.cc; the American Friend Services Committee at www.afsc.org (206-632-0500) or the Village of Hope at www.4realhope.org. (206-937-2701).