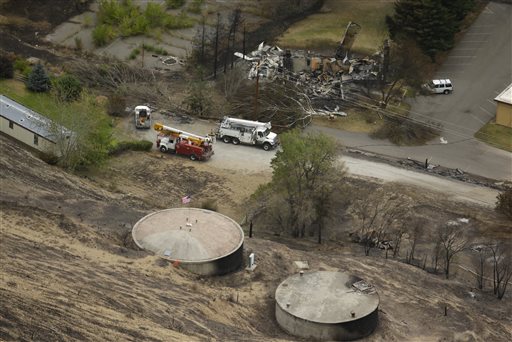 In this Thursday, July 24, 2014 aerial photo, a U.S. flag flies on top of a water tower near a burned building in the aftermath of wildfires that swept through Pateros, Wash. Fire spokesman Pete Buist says the biggest wildfire in the state's history remains at 52 percent contained on Thursday. However, the weather forecast calls for hot and dry conditions to return over the next few days. (AP Photo)

SEATTLE (AP) — The National Weather Service has extended its red flag warning for wildfire danger to most of Western Washington, including the Seattle area, where such warnings are rare.

Forecasters say near-record heat Monday will be followed by thunderstorms Monday night and Tuesday with lightning that could spark more fires.

The red flag warning now covers most of Washington and Oregon. Areas of Eastern Washington not covered by the warning are under a fire weather watch.

Forecasters say the thunderstorms and clouds from showery weather should bring Northwest temperatures back to normal by midweek.