Alito Hearings Pushed Back to Next Year 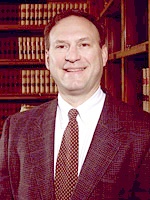 "It simply wasn't possible to accommodate the schedule that the White House wanted," Sen. Arlen Specter, R-Pa., chair of the Senate Judiciary Committee, said late Thursday. He outlined a schedule that envisions five days of hearings, followed by a vote in committee on Jan. 17 and the full Senate on Jan. 20.

Bush nominated Alito on Monday to fill the seat of Justice Sandra Day O'Connor, who has often held the swing vote on cases involving controversial issues such as abortion and affirmative action.

Conservatives eager to replace O'Connor and push the court to the right have swung behind Alito's nomination, and in making the appointment the president urged the Senate to vote this year.

Democrats, citing a need to review the voluminous record that Alito has compiled in 15 years as a judge on the 3rd U.S. Circuit Court of Appeals, favor waiting until the new year for the beginning of hearings. The 55-year-old judge has written an estimated 300 rulings and participated in roughly 1,500 cases.

"We are grownups, and we know how to get this done," said Leahy, the top Democrat on the Judiciary Committee. While not meeting Bush's timetable, he added, "We will be going at a very fast pace."

Separately, the National Archives issued a statement during the day saying its staff would need several weeks to complete a search of Department of Justice records for any material pertaining to Alito. The agency also is seeking documents at the Ronald Reagan and George Bush presidential libraries that might shed light on Alito's actions or views, the statement said.

Alito worked in both administrations and was a federal prosecutor in his home state of New Jersey before his confirmation as an appeals court judge.

Alito has met with more than a dozen senators in courtesy calls, a time-honored process that involves having the nominee walk from one office to another.

Last Thursday, though, was a day with a difference, though. With lawmakers involved in a daylong series of votes that kept them in the Capitol, Alito was ushered into a room a few paces off the Senate floor so senators — Cornyn, Trent Lott, R-Miss., and Robert Bennett, R-Utah — could be brought to him.

A fourth Republican, Lincoln Chafee of Rhode Island, talked with Alito on the steps outside the Capitol. A supporter of abortion rights, Chafee said he raised the issue with the nominee in their brief meeting. "We were able to have a candid conversation that I prefer to keep confidential," he said.

Like other senators, Chafee said he was withholding his judgment about the nomination until after the hearings. But he expressed his feelings in a distinctive way. "As a horseman, I know the first step when you meet a horse is to take it easy, take it slow," he said.

Specter was caught between conflicting pressures as he sought to work out a schedule on the nomination. While the president made his wishes clear, Democrat Leahy of Vermont said earlier this week it was not possible to hold honest or fair hearings before the new year.

Republicans have the ability to schedule hearings as they wish, but Democrats have procedural rights under Senate rules that could prolong the hearings, delay sending the nomination to the floor or otherwise complicate the administration's desire for a smooth confirmation.

Additionally, some Republicans noted that a vote in January — before Bush's State of the Union address — could allow him to claim an early political success in the new year. They also said it could be politically risky to have Alito testify in December, then allow several weeks to elapse before a vote by the full Senate. That would allow liberal critics to mount a nationwide campaign for his rejection.

A bipartisan group of 14 lawmakers met privately to discuss the appointment. Sen. Ken Salazar, D-Colo., told reporters there was a "sense that we're still together and keeping this a civil and orderly process at this point."

The group brokered a last-minute compromise last spring that prevented a Senate showdown over several of Bush's conservative appeals court nominees and a Republican threat to ban filibusters in cases of judicial appointments.