Trump Rally Brings Crowd of Protesters but no Arrests 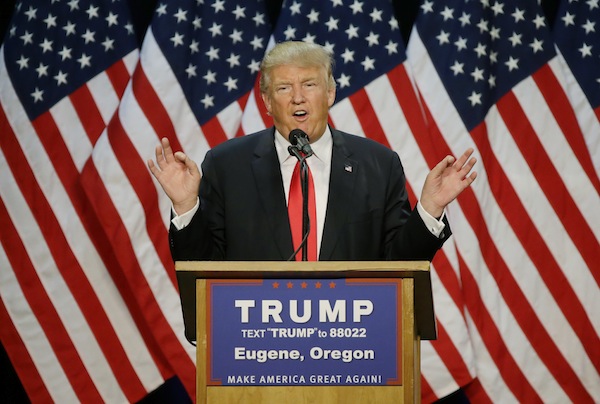 EUGENE, Ore. (AP) — Protesters in a liberal university town shouted "Dump Trump" and argued with supporters of the billionaire businessman as the likely Republican presidential nominee brought his divisive, but popular, campaign to an Oregon rally Friday.

Demonstrators in Eugene were kept at a distance from Lane Events Center, where Donald Trump took the stage.

Outside, Trump opponents banged drums and carried signs that said things such as "Trump Hates Women." Trump supporters shouted back: "This Is Our Country!"

Inside the convention center, Trump ordered the removal of a protester who had made it inside. 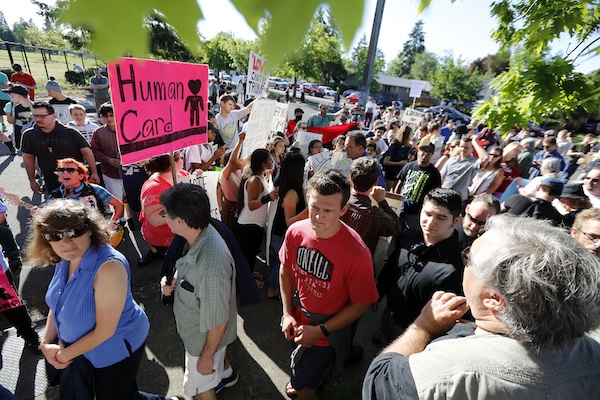 Protestors yell as attendants of a rally for Republican presidential candidate Donald Trump wait to get inside the venue in Eugene, Ore. Friday, May 6, 2016. (AP Photo/Ryan Kang)

The home of the University of Oregon and a city known for its liberalism, Eugene is hardly a good fit for the real estate mogul. But Trump made it clear at the rally that he was reaching out to Republican rural Oregon, parts of which are struggling economically.

"Timber is a crucial industry" in parts of the state but "it is being hammered by federal regulations," he told his supporters. Trump also talked about an increase in the number of Oregonians on food stamps.

Among the Trump fans was 50-year-old Ken Kraft, an Army veteran who drove about 100 miles to Eugene from Oregon City. Kraft was wearing a signature Trump red baseball cap, emblazoned with the words "Make America Great Again."

Alma Murphy, a Eugene resident, said she was supporting the New York businessman because "he's going to change things, and we need it."

Adriana Alvarez, 22, of Pleasant Hill, was among the protesters gathered outside. She said the things Trump has said are "inhumane. We are all people. We are all human beings."

Now that Trump's foes have dropped out of the GOP race, he does not need to worry too much about how he does in Oregon's May 17 primary. Nonetheless, he urged Oregonians to vote — in their upcoming primary and in November.

As the pro-Trump crowd streamed out of convention center and into the parking lot, many wore grins on their faces.

"It was awesome," said Chris Fischer, 46, of Salem. "You see it on TV and then you see it in person. The energy alone!"

The rally concluded by 10 p.m. without arrests or the need to use force, Eugene police said in a news release. Police said nearly 4,400 people attended the event.