With This Year's Juneteenth Festival, Jenelle Jack Carries on the Legacy of Clara Peoples 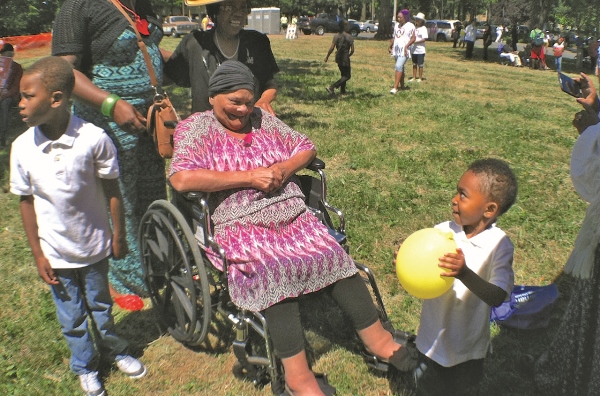 When Clara Peoples first mentioned Juneteenth to workers in the shipyards around Portland, no one knew about the celebration of the end of slavery. From that moment on, she made it her mission to bring awareness of Juneteenth to Oregon.

Juneteenth commemorates the events of June 19, 1865 in Galveston, Texas, when Union General Gordon Granger read a proclamation announcing the freedom of all slaves. Every year after, the 19th was celebrated as Juneteenth Independence Day or Freedom Day.

Peoples, the mother of Juneteenth in Oregon, passed away last year after witnessing the 150th Juneteenth anniversary celebration. Her granddaughter, Jenelle Jack, has chosen to keep her grandmother’s dream alive by organizing and educating Oregonians about this too-often overlooked part of history.

The Skanner News spoke with Jack about the story behind the Oregon celebration, carrying on her grandmother’s dream and her hopes to bring the community together. This years’ celebration will take place June 18, from noon until 7 p.m. at Legacy Emanual field at the corner of NE Williams and Graham streets. This interview has been edited for space and clarity.

The Skanner News: What is the history behind the Juneteenth Oregon celebration?

Jenelle Jack: My grandmother is from Muskogee, Oklahoma. She moved to Portland in 1945 and was working in the shipyards. Back in Oklahoma they celebrated Juneteenth every year, but during Juneteenth up here in Oregon, she asked, “Is there a celebration?” and she said that nobody knew about it.

So, she went to the supervisor and asked during their lunch break if they were able to celebrate Juneteenth and he said yes. Ever since then, she started celebrating Juneteenth here in Oregon and trying to make it aware to everybody.

TSN: How did you come to organize the Portland Juneteenth celebration?

JJ: A couple of years ago I helped her out with Juneteenth and then she started getting sick. She had dementia and Alzheimer's so she handed it over to my cousin, Doris Rush.

And then with grandma, she passed in October. I know that Juneteenth was her baby as well as her food program with the Church.  In her last couple of days I just told her, “Grandma, don't worry, we'll make sure that Juneteenth still continues here in Oregon.”

My cousin Doris' mom passed away in February and so I just took over.  I know what she is going through because of what I went through with losing Grandma. Now both matriarchs are gone.

It is hard, but I think me working on Juneteenth has helped with my grieving process. My grandmother lived with me until she passed away.

TSN: What goes into putting on this event?

JJ: It's a lot. With being my first year, it is a lot. And the time we had to put it together wasn't enough. But, with a death in the family, we got to push for it. We got a lot of my cousins to help out -- it was just reaching everyone.

There was a lot of people that we talked to that weren't aware of what Juneteenth was. Reaching out to them and getting their support, we made them aware and gave information out about Juneteenth, which interested them into getting to know more and helping us out in the effort.

It's been fun, but it's a lot of legwork and follow-up calls and reaching out to people.

TSN: Why did you choose "Bridging the gap" as this year’s theme?

JJ: Because I am trying to. I think we've reached a lot of people that didn't know about it and it's a community event. Even though Juneteenth is about freedom from slavery, it's freedom for everybody.

With that day, that's when America actually was freedom for all and togetherness. I think bridging the gap is bringing the community together as well as putting it out there more than what we have done in the past and not just making it about one group, it's for everybody.

TSN: What is happening this year that you are particularly excited about?

JJ: We've gotten quite a few sponsors. TriMet, they got on board this year. Wells Fargo, they've been a supporter for years. Metro wants to sponsor us. Weston Kia, it's their first year.  We'll have Phagan's Beauty School out there as a vendor, cutting hair and doing braids, doing makeovers.

We've got a lot of human service vendors giving out information for the community. The parade, we have some marching bands. The performers have talent but they are not in the spotlight. The biggest excitement for me is having them being involved and performing with the community there to support them.

TSN: What is one of your favorite Juneteenth memories?

JJ: My favorite Juneteenth memory, it was back in the ‘80s. It was held at Bethel AME church and there was a clown there. I didn't know who she was, I just called her “the clown.”

TSN: Why do you feel like this is important?

JJ: Community-wise, it's important because it's really not taught in history when you are going to school. Juneteenth is not a hot topic, but it is history and I think it is important that everyone knows this part of history. Slavery was a big part of history, but the ending of slavery wasn't more talked about.

For personal reasons, it is helping keep my grandmother's legacy alive, because I know what she worked hard for. This is what she lived for and I was happy for her to see the 150th year anniversary. This will be the first year without her here.