What could Oprah Winfrey, George Clooney and Chris Rock have in common? In two words: Barack Obama. All three are backing the senator for Illinois, in the race for the next president of the United States.
About 4,000 less-famous people were able to make up their own minds about the candidate when Obama visited the Oregon Convention Center last Friday, outlining his vision for the country. Retired General Tony McPeak, a retired fighter pilot and head of the U.S. Air Force under the first President Bush introduced Obama.
"We were running against something in 2004," said McPeak, who campaigned for Kerry in the last election. "This time I think I'm lucky, you're lucky, we're lucky. We have a guy who we can be for."
Once the Oregon co-chair of Veterans for Bush/Cheney, McPeak split with the Republican leadership over their handling of the Iraq War. Obama has what it takes to be commander-in-chief, he told the crowd.
"We want a guy as commander-in-chief who draws slow, takes dead aim and shoots straight. He won't be a good commander-in-chief: he'll be a great one," McPeak said.
Speaking to a sympathetic and enthusiastic crowd – which appeared as diverse in age, color and ethnicity as you are likely to see in Portland – Obama called for a renewal of American values.
"We've got to do politics fundamentally differently. Just a change of party in the White House is not going to bring about the change we need," he said. "What we need in this country is a transformation. What we need is something entirely new. We need a new chapter in American history."
Obama attacked the current administration for their handling of everything from the economy and Hurricane Katrina, to foreign policy and civil liberties.
"The American people are fed up with this disastrous war on Iraq and with an administration that views itself as above the law and doesn't believe in checks and balances," he said.
Yet despite these challenges, Obama said the fundamental decency of ordinary American people made him hopeful and optimistic for the future.
"There is a belief that I am my brother's keeper, I am my sister's keeper and this belief is not just expressed in America's synagogues and churches and mosques and temples," he said. "It has to be expressed in our government. This country is not built on the philosophy that you are on your own. It was built on the philosophy that we are in it together."
Describing the health care system as "broken" Obama pledged to create a universal health care system in his first term. His own mother, he said, died of ovarian cancer at the age of 53, her last months marred by worries over whether her insurance would cover what might have been a "pre-existing condition."
Obama said he would begin withdrawing troops from Iraq immediately after being sworn-in. Improving schools, closing the achievement gap, making college affordable and tackling energy and environmental problems would be the keystones of his domestic policy. In foreign policy, he would build partnerships with other nations and seek to solve problems diplomatically. America can be safe and secure and also regain the respect of the world, he said.
Answering criticism that he lacked the experience to be president, Obama said his two decades of public service — working in grassroots organizing, as a civil rights lawyer in Chicago and as a constitutional law professor were qualification enough: experience in Washington politics should not be the only experience that counts.
"A long resume does not speak to character," he said pointing out that Vice-President Cheney has a solid gold resume. "I believe I have the experience that Washington and America need right now."
The crowd in the Convention Center – who each had paid $25 to 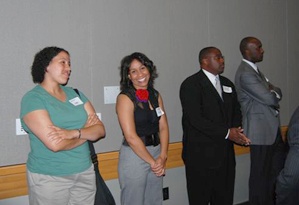 hear him talk – clearly liked what he had to say. Some wore T shirts with slogans such as Obama BaRocks or carried signs saying "Oregon Wants Obama."
Taylor Allen, a 17-year-old senior from Grant High School, said she will now campaign for Obama.
"I'll be ready to vote next year," she said. "He makes you feel inspired that you want to go out and talk to other young people about him."
Danielle Tucker, 17, also a senior at Grant, said she feels the same way.
"Especially seeing an African American male up there and knowing what they have to go through to get there, it makes me want to go out and tell other young people about him. In my opinion it is our duty to vote," she said.

A crowd of about 4,000 people turned out to listen to Barack Obama speak at the Oregon Convention Center.