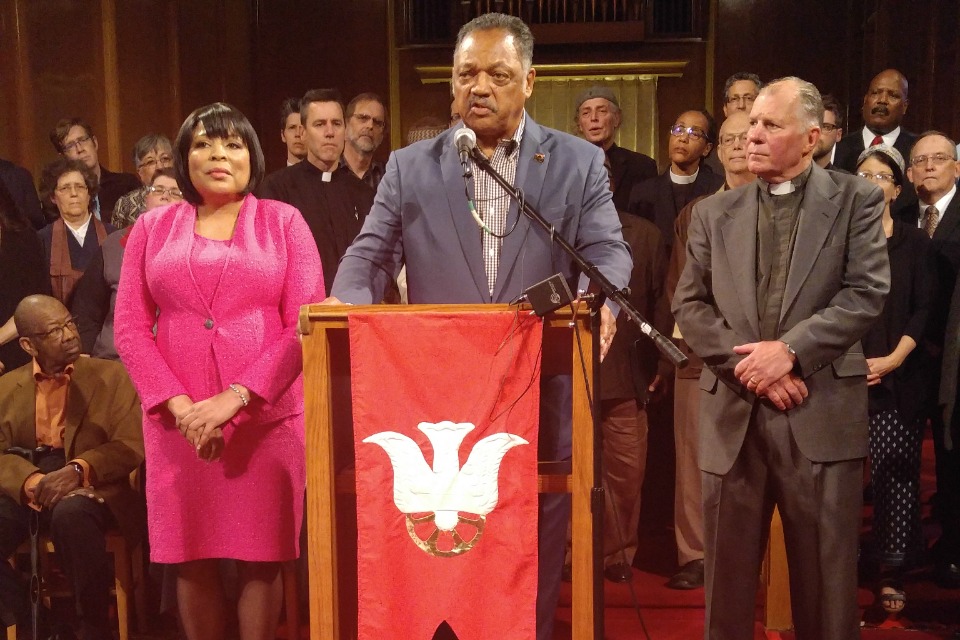 Rev. Jesse Jackson urged Portlanders last week to embrace nonviolence and take “multiracial, multicultural” action against racist attacks like the May 26 stabbing on a Portland MAX train – and called for the opening of a local office of his organization.

At a June 2 press conference at Augustana Lutheran Church in Northeast Portland, Jackson also called for the creation of a local office of his organization, the Rainbow PUSH Coalition, to fight racism in Portland -- and that he’d asked the Rev. Mark Knutson, pastor of Augustana, and County Commissioner Loretta Smith, to co-chair the chapter.

The Skanner was unable to confirm by deadline the amount of money raised Friday, where funds raised went or what next steps are for a local RPC office.

This is at least the second time Jackson has attempted to open a Portland chapter of his organization. In 2010, The Skanner reported on a speech Jackson gave at Self Enhancement Inc., in which he said he was working with Bishop A.A. Wells to establish Portland and Seattle chapters of the group. The Skanner was not able to reach Wells for a comment on what became of that effort.

Jackson was already scheduled to speak in Portland that day at a meeting of the National Organization of Black County Officials, of which Commissioner Loretta Smith is a board member.

He praised the heroism of 53-year-old Ricky Best, 23-year-old Taliesin Myrddin Namkai-Meche, and 21-year-old Micah David-Cole Fletcher, White men who intervened on behalf of two Black teenage girls who were being harassed on a MAX train May 26. Best and Namkai-Meche were killed and Fletcher was injured.

“It was their Samaritan spirit that showed just who we really are,” Jackson said to a small gathering of reporters and faith and community leaders in Augustana’s sanctuary Friday morning.

He also said there have always been “counter-cultural” reactionary forces determined to fight racial progress, and that when oppressive structures are changed, hearts and minds will follow.

And he urged community members opposed to racism and not to “fight fire with fire” or give racists an audience.

“We’ll have our own day to march, and we’ll not be afraid,” Jackson said. “We’ll show our faces, and we’ll tell the world, ‘This is who we really are.’”

The press conference came two days before a well-publicized Patriot Prayer gathering of far-right militia groups in downtown Portland – and three planned counter-demonstrations in the same area, the largest of which was organized by a coalition of dozens of progressive organizations.

Asked if he was specifically urging activists not to counter-demonstrate the following Sunday, Jackson said, “If you plant two seeds in the ground of equal strength, the plant that grows will be the one with more light.” He also said Americans need to contend with a complex, unique racial history and work together to fight hate.

Reporters from Oregon Public Broadcasting and The Oregonian also captured video and photos of Oath Keepers – a militia group participating in the Patriot Prayer demonstration – assisting with Sunday arrests. That arrest is now under review with the U.S. Attorney's office.

At 4:30 p.m. after permits for at least two of the demonstrations had expired and protesters began filtering into the street, police detained 200 to 300 demonstrators and at least seven reporters for both local and national media downtown. Both demonstrators and reporters wrote on social media that police photographed their IDs before releasing them from the kettle and told them they may be charged with a crime later.

Tuesday Portland Police Chief Mike Marshman said on Oregon Public Broadcasting’s “Think Out Loud” that such demands aren’t consistent with PPB policy and hinted one of the other jurisdictions present may have asked for IDs. Immediately after the interview, OPB reported Marshman had contacted the station again to confirm PPB had in fact demanded and photographed ID evidence.