Portland Protests Persist with Some Flashes of Violence 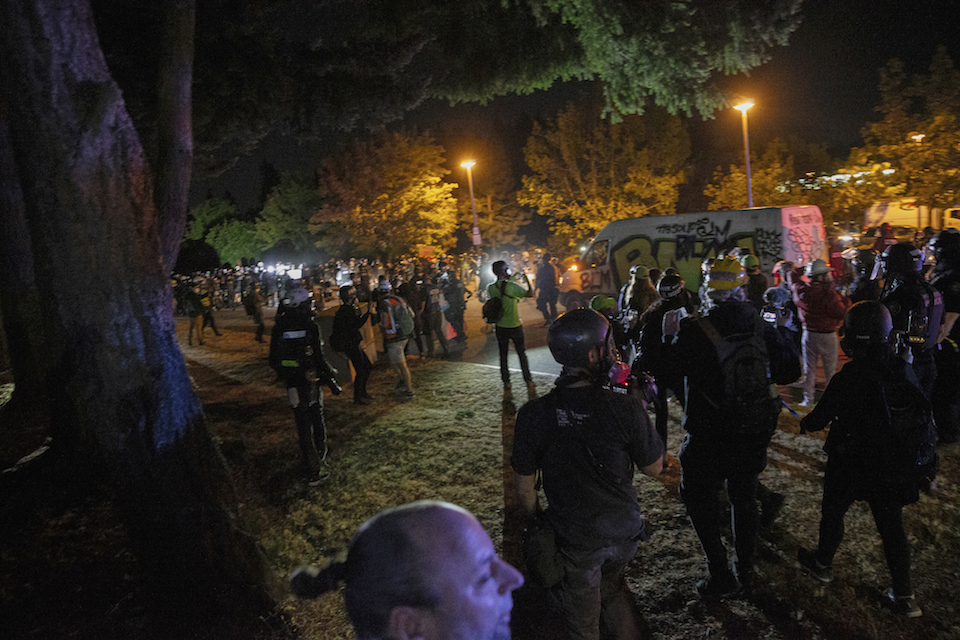 PORTLAND Ore. (AP) — More protests are expected in Portland, Oregon, throughout the weekend following violent demonstrations this week that have brought more unrest to the city.

Since George Floyd was killed in Minneapolis protests have occurred nightly for 70 days. Friday night, Portland police declared an unlawful assembly at the Penumbra Kelly public safety building, ordering everyone in the area to leave. Authorities had previously warned people not to trespass on the property.

Protesters remained for several hours before officers began to rush the crowd away from the building using impact munitions early Saturday. Several people were detained, according to local news outlets.

Portland police said on Twitter that the crowd was being dispersed because rocks and explosive devices had been thrown or launched toward officers.

Democratic Mayor Ted Wheeler said this week the violent protesters are also serving as political “props” for President Donald Trump in a divisive election season where the president is hammering on a law-and-order message.

Trump has tried to portray the protesters as “sick and dangerous anarchists” running wild in the city’s streets.

The chaos that started Thursday night and lasted into Friday morning in a residential neighborhood about 6 miles (10 kilometers) from downtown.

The demonstrations this week had been noticeably smaller than the crowds of thousands who turned out nightly for about two weeks in July to protest the presence of U.S. agents sent by the Trump administration to protect a federal courthouse that had become a target of nightly violence.

This week’s clashes have, however, amped up tensions after an agreement last week between state and federal officials seemed to offer a brief reprieve.

The deal brokered by Democratic Gov. Kate Brown called for agents from the U.S. Customs and Border Protection, U.S. Marshals Service and U.S. Immigration and Customs Enforcement to pull back from their defense of the Mark O. Hatfield Federal Courthouse starting July 30.

Early Friday, as peaceful demonstrations proceeded elsewhere in the city, a group of people gathered at a park in eastern Portland and marched to the local police precinct, where authorities say they spray-painted the building, popped the tires of police cars, splashed paint on the walls, vandalized security cameras and set a fire in a barrel outside the building.

One officer was severely injured by a rock, police said, but no additional details were provided.

Tear gas was used by police on protesters Wednesday for the first time since the U.S. agents pulled back their presence in the city, but officers did not use it Thursday despite declaring the demonstration an unlawful assembly.

Portland police have arrested more than 400 people at protests since late May. U.S. agents arrested at least an additional 94 people during protests at the federal courthouse in July.