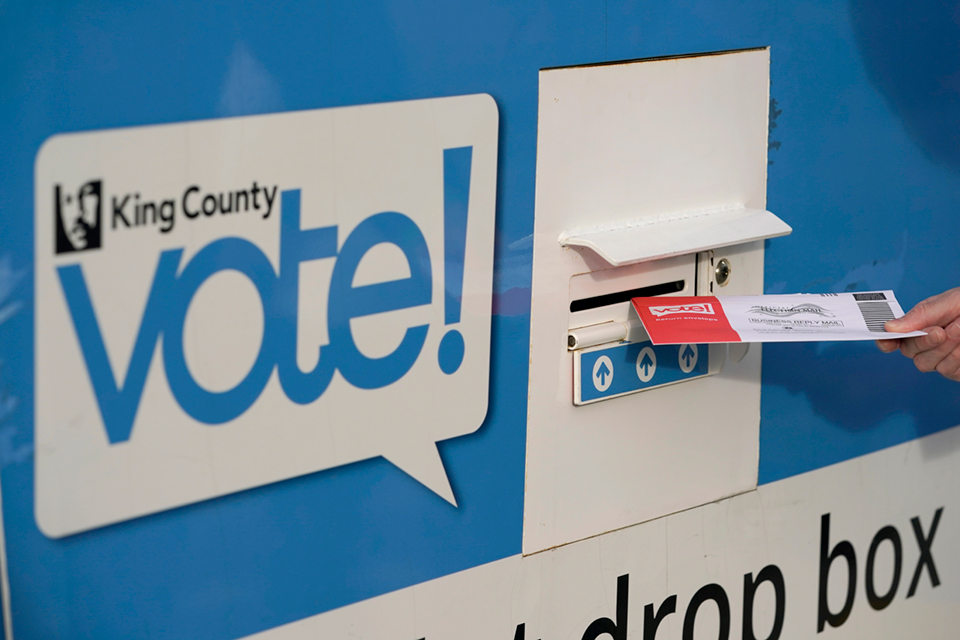 OLYMPIA, Wash. (AP) — Washington voters will winnow the field of candidates in dozens of races in the state’s primary Tuesday.

Washington is a vote-by-mail state, and ballots were sent to nearly 4.8 million registered voters weeks ago. Voters must have their ballots postmarked and in the mail by Tuesday, or they can drop them off at drop boxes around the state by 8 p.m. Results often take days to come in as the ballots arrive in elections offices throughout that week.

Under the state’s primary system, the top two vote getters advance to the general election in November, regardless of party.

Here’s a look at the top races voters will be weighing in on:

U.S. Sen. Patty Murray faces more than a dozen primary candidates as she seeks a sixth term, but is expected to advance with Republican Tiffany Smiley, a first-time political candidate. Washington voters haven’t elected a Republican to the U.S. Senate since 1994. Smiley, a former nurse from Pasco, has highlighted her past advocacy for her husband, a military veteran who was blinded in an explosion while serving in Iraq. Murray, a member of Democratic leadership, has risen to chair of the Senate Committee on Health, Education, Labor, and Pensions.

All 10 Congressional seats are on the ballot but only three races are competitive. Three Republican challengers have mounted campaigns in an effort to unseat Democratic U.S. Rep. Kim Schrier in Washington’s 8th Congressional District: Army veteran Jesse Jensen, who ran unsuccessfully against Schrier in 2020; King County Council Member Reagan Dunn, a former federal prosecutor whose mother once held the seat; and former state attorney general candidate Matt Larkin. The seat is a key target of GOP efforts to retake control of the House. Two other Republican members — Rep. Jaime Herrera Beutler in the 3rd Congressional District and Rep. Dan Newhouse in the 4th Congressional District — are being targeted by some within their own party over their vote to impeach former President Donald Trump. Herrera Beutler faces several Republican opponents as she seeks a seventh term — including Joe Kent, a former Green Beret endorsed by Trump — and Democrat Marie Gluesenkamp Perez. Newhouse, a four-term congressman, has also drawn a Trump-endorsed challenger. Loren Culp, a former small town police chief who lost the 2020 governor’s race to Democrat Jay Inslee but refused to concede, won Trump’s endorsement in February, but has lagged in fundraising. Jerrod Sessler, a Navy veteran and former NASCAR driver who has raised the most money among the challengers, followed by Democrat Doug White.

Washington’s Democratic Secretary of State Steve Hobbs was appointed by Gov. Jay Inslee last November to replace former Republican Secretary of State Kim Wyman, who left to take a key election position in the Biden Administration. Hobbs faces several challengers – including a long-serving elections official from Pierce County who is running as a non-partisan -- as he attempts to hang on to the office for the remaining two years of Wyman’s term. There are multiple Republicans in the race, but the challenger who has raised the most money is Pierce County auditor Julie Anderson, who says she would push for a change to state law to make the office nonpartisan. Among the Republicans in the race, former Sen. Mark Miloscia — who is now head of the conservative Family Policy Institute — has raised the most among the Republican candidates. Republican Sen. Keith Wagoner has been endorsed by former Republican Secretary of State Sam Reed. Tamborine Borrelli – an “America First” candidate — was fined by the state Supreme Court in June for making legally meritless claims alleging widespread voter fraud.

All 98 seats in the House are up for election, as are 25 of the 49 in the Senate. Of the 123 total legislative races, there are 29 incumbents running unopposed. In 42 seats, there’s only two candidates running, all of whom will automatically advance to the November ballot. Democrats currently hold a 28-21 advantage in the Senate, and a 57-41 advantage in the House. The most expensive legislative race is the 26th District in the Senate, where Democratic incumbent Sen. Emily Randall is facing a challenge from Republican Rep. Jesse Young. Combined, they have raised more than $814,000 to date, with spending topping $455,000 heading into the primary.