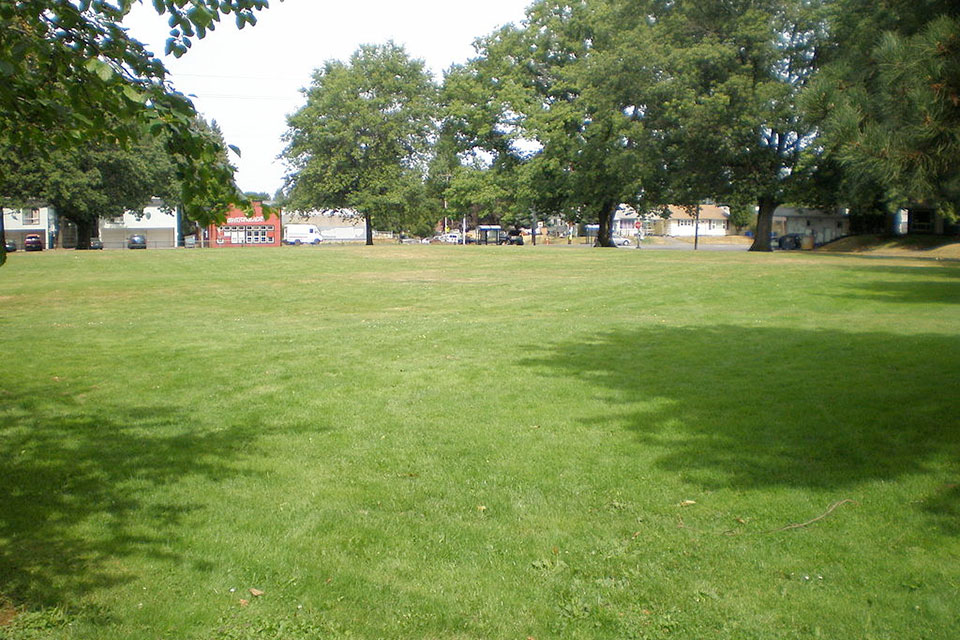 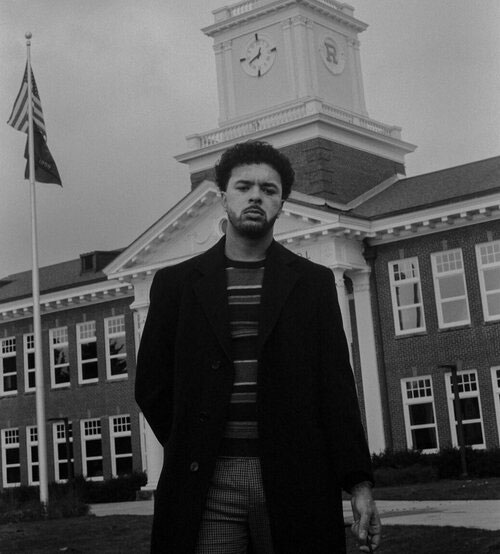 “The first place I made friends was at the park,” Randol told The Skanner of growing up across the street from George Park in St. Johns. “I remember being young and I used to count on my hands to see how many friends I’d made here, and I got to over 100.”

Randol’s childhood house has since been replaced by condos, but the park remains as a nostalgic anchor amid gentrification.

But even as anchors go, the park is pretty wanting, Randol admits.

“I recently moved back to the area in 2020,” he said. “I thought, man, what are they doing with this park? It’s the closest park to where I live.

"I take my son there, he gets bored there after five minutes.”

So Randol teamed up with Donovan Smith, a writer and activist who launched the Gentrification is WEIRD! movement as a multimedia platform for Black voices. Together they created the Friends of George Park group to amplify Black and Latinx voices as they pushed for the park’s renewal.

“I think it makes a community safer when you actually have an active park that is for the kids, that brings the families out,” Smith said.

Randol and Smith point out the park is near Roosevelt High, George Middle School and Sitton Elementary School, yet lacks public bathrooms and significant community amenities.

“It’s a place for people to come together as a community,” Randol said.

“They should be proud of their park.

"They should be proud of what’s going on in the neighborhood. I think it’s just something that could bring people together on a big scale.”

“I think with this park there’s an opportunity to look at park development a little bit differently too,” Smith said. “The city already has a mission to make what they’re calling ‘15-minute neighborhoods’ where there’s a walkable park in every neighborhood in Portland, and that’s great, we’re all for those things, but what can happen is that St. Johns will continue to gentrify and price people out.

"So by the time they do get around to developing that park, you’ll be talking to a much different group of people.”

To bring more of the neighborhood onboard with the project, and to show the city how important George Park is, Randol and Smith are launching the first annual The Kidz Outside festival on Aug. 26 – and it’s slated to be an evening of dynamic local performances, headlined by Randol and featuring 12-year-old rapper J Prodigy. Nikki Brown Clown will be in attendance, and as most area schools are back in session Aug. 30, the event will offer free school supplies to attendees.

“This event is a way to let people know this is your neighborhood still, this is your park to give voice on,” Smith said. “We’re going to bring this vision to life.”

A Place to Gather

Efforts to revitalize George Park were slow going at first, the cofounders of Friends of George Park admit. The early days of the COVID pandemic impacted their initial push to survey the community about what the park was lacking. 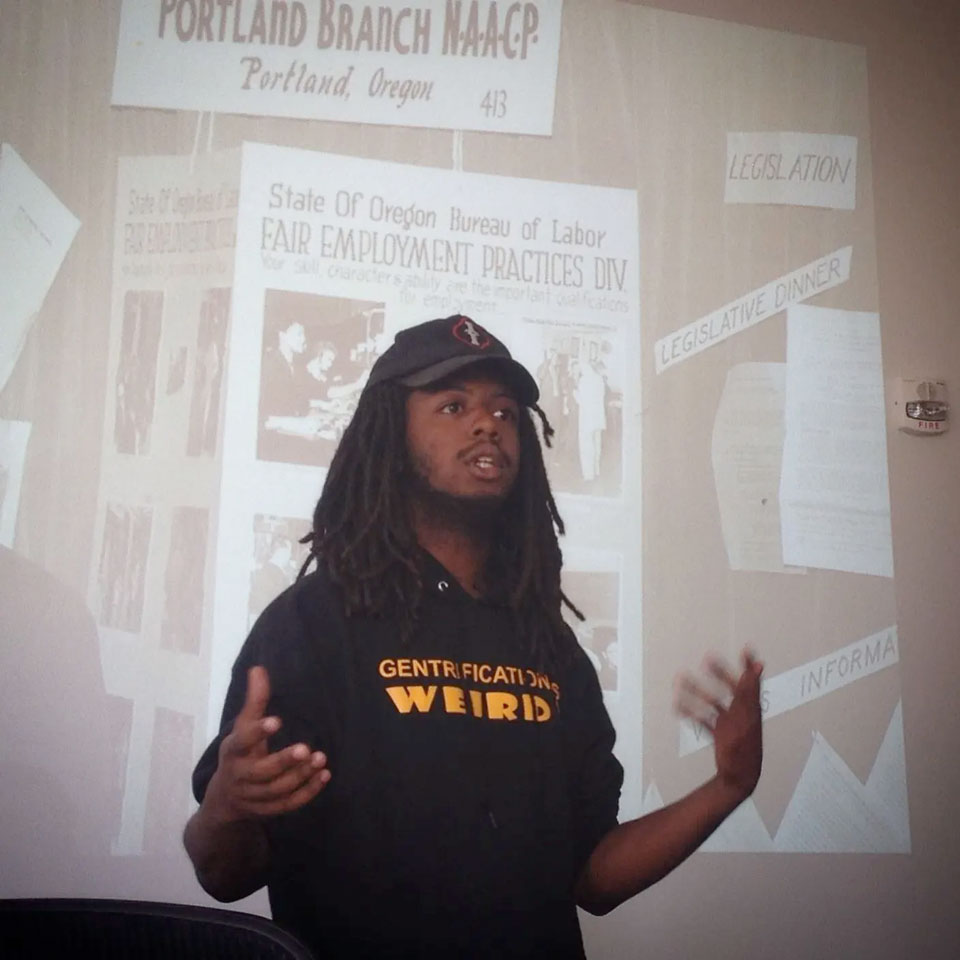 Donovan Smith“Neither of us had ever worked on a park development before, so this is definitely new territory for us,” Smith said.

They managed to distribute a survey via Facebook, text messages and word of mouth.

“A lot of people said they wanted to see basketball courts there, or more lighting around the park,” Randol said.

“A lot of what we heard too is that people don’t spend time at George,” Smith added. “They would like to. People are saying ‘I spend less than 30 minutes there on average,’ or ‘I don’t go there at all. I would go there if there was something for me or for my kids to do.’ I think that’s the biggest thing: How do we build this to be something that actually is for the kids and the families out there?

Other parks in the Portland Metro had been overhauled with newer play structures and inclusive play equipment that often included interactive instruments. Randol became uneasy with the bark dust ground cover at George, seeing potential for injury and also viewing it as a barrier to accessibility. Newer parks opted for soft-fall rubber in play areas, which provides even ground and a more forgiving surface.

Randol said they met with Cody Goldberg, who successfully headed efforts to revamp Arbor Lodge Park’s play area into an accessible playground for children like his daughter, Harper, who was born with a genetic condition that restricted her ability to walk.

“The ADA component to this is definitely a (consideration),” Smith said. “If we’re redesigning this, let’s make sure more people have access to it.”

They have been in conversation with the city, they said, and did a site visit with representatives from Jo Ann Hardesty’s office and from the Portland Bureau of Transportation.

Their early efforts gained them recognition as the 2021 U.S. Bank Parks Champions, awarded by the Portland Parks Foundation.

“As artists, volunteers, and advocates for change, they’ve worked on a number of projects focused on including communities of color who have traditionally been left out of placemaking and stewardship events,” the foundation stated in announcing the award.

Randol and Smith hope the attention will bring more support for a new George Park.

“At the end of the day we’re looking at this to become an annual event,” Randol said.

“Bit by bit, people will be able to come to George Park and see their vision heard.”

“I have a newborn, and I’m excited that when she’s a little bit older I can take her to the park and have her run around at this place that we helped design,” he said.

THE KIDZ OUTSIDE Festival will take place Friday Aug. 26, 6:30 to 8:30 p.m. The event is all-ages and free. For more information, visit their Facebook event page.