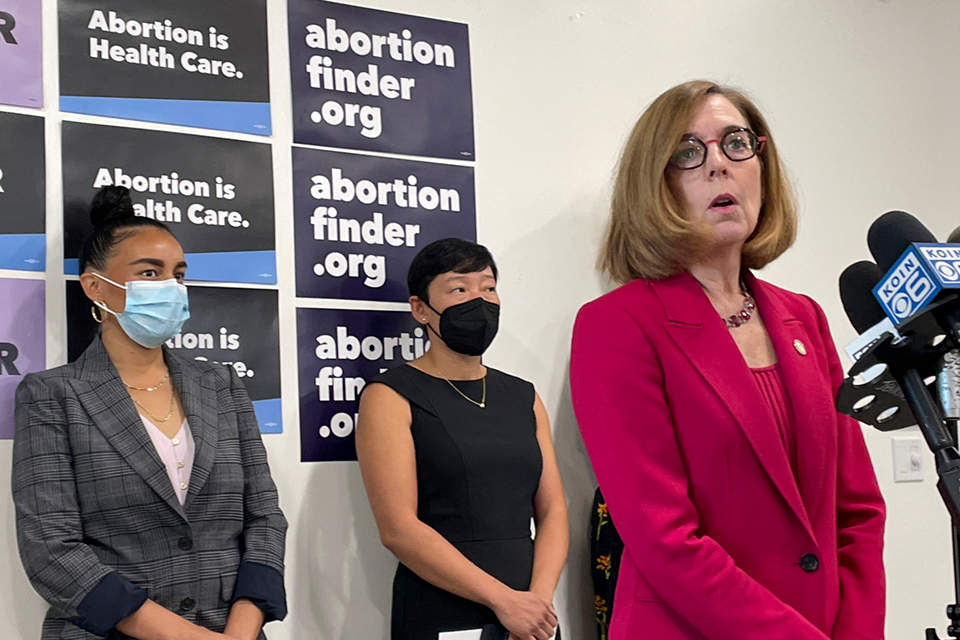 PORTLAND, Ore. (AP) — Planned Parenthood leaders in Oregon on Thursday said there has been a surge in the number of people traveling from out of state for abortions, including from neighboring Idaho, where most of a near-total abortion ban has taken effect.

“We are definitely seeing an uptick as more and more trigger bans are being put into effect and laws are being enacted,” said Anne Udall, president and CEO of Planned Parenthood Columbia Willamette.

Oregon, along with Washington and California, has sought to establish the West Coast as an abortion safe haven, pledging to welcome patients traveling from states where the procedure has been banned or greatly restricted. Shortly after the Supreme Court overturned Roe v. Wade on June 24, the Democratic governors of the three states issued a joint “multi-state commitment,” saying they will work together to defend abortion access and protect patients and providers.

Brown said she is working with “colleagues up and down the West Coast” to ensure abortion access.

“Oregon will continue to be a safe, welcoming and inclusive state for all those who want to seek access to reproductive health care," Brown said.

In Idaho, most of a near-total abortion is in effect. It criminalizes abortions in any “clinically diagnosable pregnancy.” Anyone who performs or assists in an abortion can be charged with a felony punishable by up to five years in prison. Once charged, physicians can attempt to defend themselves in court by showing that the procedure was necessary to prevent the pregnant woman from dying in a medical emergency or that it was performed in cases of rape or incest.

The U.S. Department of Justice sued over the law in early August. A federal judge on Wednesday temporarily blocked part of the ban from taking effect, over concerns it violated federal law on emergency medical treatment. The ruling allows abortions to be performed in the case of a medical emergency for now, but all other non-emergency abortions are still banned.

The injunction will be in place until the DOJ lawsuit is resolved.

Many Idaho residents seeking abortion must now travel farther for care, often resulting in long and costly journeys. Udall said staff had told her about a patient who spent $1,200 on a taxi ride from Boise, Idaho, to the Planned Parenthood clinic in Bend in central Oregon.

Bend is the site of the sole Planned Parenthood clinic serving the eastern half of Oregon, a vast, rural area. The small clinic, which has struggled with staffing shortages and limited scheduling availability, is hiring more personnel and expanding telehealth services to respond to the growing demand.

Some abortion rights advocates worry the Idaho abortion restrictions could also limit access in parts of Oregon. Since the Planned Parenthood clinic in Boise closed, some people in eastern Oregon must now travel four hours to Bend for abortion care.

Udall estimated about a third of eastern Oregon residents are impacted by Idaho's anti-abortion laws.

Anticipating an abortion ban in Idaho, Oregon lawmakers earlier this year created a $15 million fund to increase access to abortion services. Northwest Abortion Access Fund, a nonprofit that helps patients pay for travel and the procedure itself, has been tapped to receive the first $1 million. Amidst growing demand for travel funds, NWAAF exhausted its planned operating budgets for this year and had to approve additional emergency funds to meet the need. Its service region includes Oregon, Washington, Idaho and Alaska.

In Oregon, Brown has not issued an executive order or directive similar to those of Newsom and Inslee. Brown said Thursday that her office is working with state agencies “to ensure that we are protecting both patients' privacy as well as legal tools that we may need in the future."