In the ‘Roaring ‘20s’ the KKK Seized Power Statewide 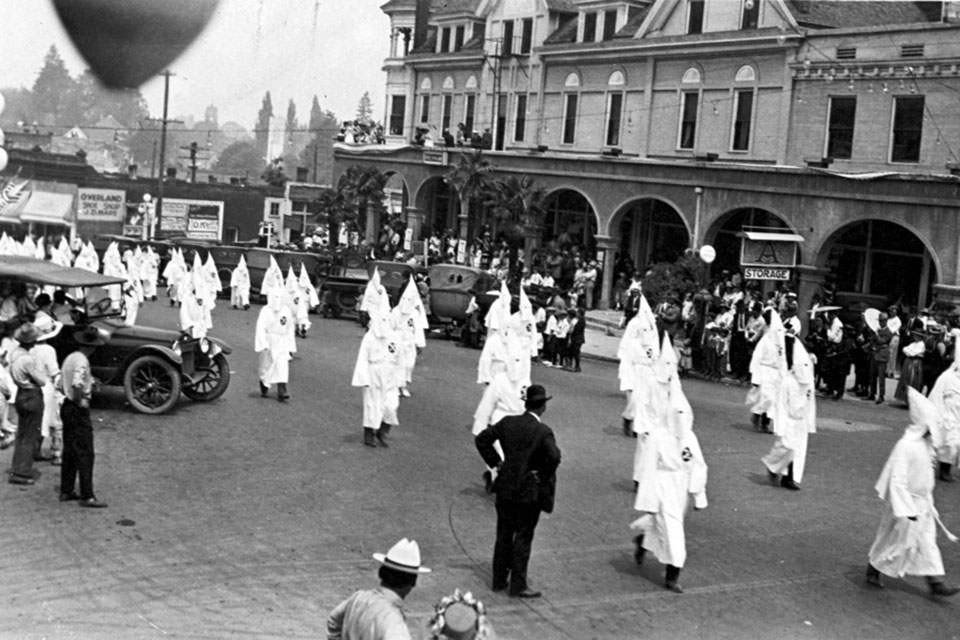 Second in a series

One hundred years ago, in the lead-up to Oregon’s May 1922 primary, political candidates were beating a path to Room 433 of the Pittock Block in downtown Portland.

Candidates for state and local office were seeking the support of Fred Gifford, the head honcho or “exalted cyclops” of the Ku Klux Klan in Oregon.

“In the opinion of many competent political observers,” wrote C.C. Chapman, editor of Oregon Voter magazine, Gifford had become “pretty much the political boss of Oregon.”

The Klan and its allies in the Federation of Patriotic Societies were vetting candidates in every county to see which ones to back, Gifford said.

Barely one year after the reconstituted KKK expanded operations into Oregon, the Klan claimed 14,000 members here, 9,000 of them in Portland.

After former minister William Simmons resurrected the Klan in 1915 in Georgia, he pledged the new version would be law-abiding and nonviolent, unlike the original Klan that terrorized Blacks after the Civil War.

But the new Klan still espoused white supremacy, and never gave up its intimidating tactics.

In March and April 1922, mobs wearing masks and robes abducted three men in the Medford area — one Black, one Mexican American and one Catholic. All were strung up by the neck and hung, then released before they choked to death. Perpetrators dubbed these “necktie parties.”

Six klansmen later were indicted for the crimes.

But the three lynchings didn’t dent the Klan’s growing popularity and political clout in Oregon, says David Horowitz, a Portland State University history professor who has written extensively about the Klan here.

“There wasn’t an immediate turnaround after those necktie hangings,” Horowitz says. “It didn’t come until later.”

The 1920s version of the Klan was still openly racist and anti-Semitic. But its main targets in Oregon were immigrants, particularly Catholics and Japanese farmers.

In his March 1922 interview with Oregon Voter, Gifford said the Klan feared “the allegiance of Catholics is to a foreign power.” He hinted at what would become the Klan’s signature issue here: banning Catholic schools. Gifford also endorsed proposals to bar “aliens” from owning land, which meant Japanese immigrants who were prospering in agriculture.

A force in the primary

State Sen. Charles Hall, a Republican from present-day Coos Bay, was one of several politicians to seize upon the Klan’s coattails. Running in the GOP primary for governor, Hall made his central plank the abolition of private and parochial schools for children in the lower grades. That won him the backing of the Klan and the Federation of Patriotic Societies, a coalition of anti-Catholic fraternal societies and churches.

The Ku Klux Klan and its backers, the governor proclaimed, were “endeavoring to usurp the reins of government, are stirring up fanaticism, race hatred, religious prejudice, and all of those evil influences which tend toward factional strife and civil terror.”

Candidates’ stance toward the Klan — or whether they were members — dominated the election. The GOP primary “degenerated into a pow-wow with does-he-belong or does-he-not the principal question,” Oregon Voter lamented.

Power base in Portland 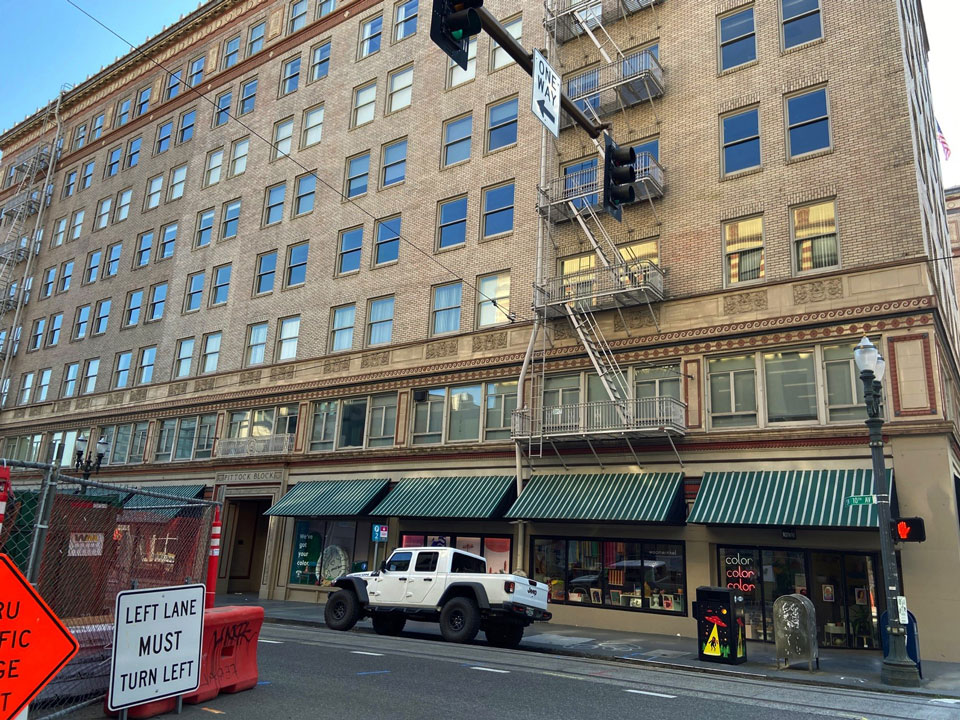 In 1922, Fred Gifford, the head honcho or “exalted cyclops“ of the Ku Klux Klan in Oregon, set up shop in the Pittock Block, Southwest Ninth Avenue at Washington Street. Gifford was considered the “political boss“ of Oregon.

Only five U.S. cities attracted more Klan members than Portland, according to Kenneth Jackson, in his 1967 book “The Ku Klux Klan in the City, 1915-1930.”

On May 9 and 10, 1922, the Klan turned away hundreds of people who sought to attend public lectures by the Rev. Ruben Sawyer at downtown Portland auditoriums, due to lack of space. On the second day, 1,000 people who were turned away formed an angry mob roaming downtown streets, requiring 83 police and 14 Sheriff’s deputies to restore order, Jackson wrote.

The Klan reportedly recruited 60% of the Portland police department as members.

By June, the Klan captured control of the county Republican Central Committee, wrote Malcom Clark Jr. in a 1974 article for Oregon Historical Quarterly.

Under Klan auspices, Portland theaters brought back the 1915 film “Birth of a Nation,” which romanticized the post-Civil War Klan. Portland’s small Black community, led by the NAACP, protested the film showings, which attracted large audiences.

In that period, “there were ‘kavalcades’ of Klansmen in full dress driving throughout the city in their automobiles,” wrote the Rev. Lawrence Saalfeld, in a 1950 master’s dissertation on the Klan in Oregon. Sometimes the Klansmen deliberately drove past Catholic schools.

Many of the Klan’s public gatherings featured Sister Lucretia, an “escaped nun” who left her order and whipped up anti-Catholic sentiments, along with V.K. “Bearcat” Allison, an “escaped priest.”

Catholic leaders appealed to Portland Mayor George Baker to deny the Klan use of public buildings for their meetings, but he declined, saying that might cause uncontrollable riots.

In a sign of the Klan’s electoral muscle, incumbent Gov. Ben Olcott barely defeated Hall by only a few hundred votes in the GOP primary.

The Klan issued a statement declaring it a stolen election, bearing “the indelible stamp of the Catholic pope in Rome.”

In the Klan stronghold of Multnomah County, 12 of the 13 Klan-backed legislative candidates won nomination.

The Klan also succeeded in getting two new candidates, John Rankin and Dow Walker, elected to the Multnomah County Commission.

The month after the primary, leaders of the Scottish Rite Masons submitted petitions for a November ballot initiative to effectively ban private schools.

“Pierce, as an opportunist, realized that if he supported the school measure, he’d win the support of the Klansmen,” Horowitz says.

The daily Portland Telegram newspaper later reported of a secret meeting between Pierce and Klan leaders at Portland’s Pythian Temple, where Pierce reportedly pledged his support for the initiative in exchange for Klan support. 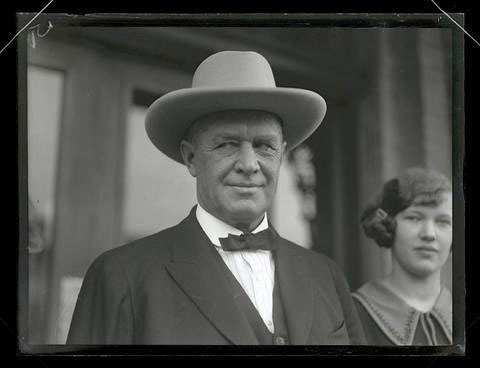 The Ku Klux Klan backed Democratic State Sen. Walter Pierce for governor in 1922 after he agreed to support a Klan-favored measure to ban Catholic schools. Pierce won easily with 57% of the vote; the largest majority in an Oregon governor‘s race since 1858. Courtesy Photo: Oregon Historical Society

Though Pierce had liberal positions on many issues, he was widely considered a strong “nativist,” someone hostile to immigrants. On the campaign trail, he often endorsed the Klan mantra of “100% Americanism.”

Horowitz, who obtained complete meeting minutes of the La Grande Klan chapter, found Pierce appeared cozy with the Klan there.

“The minutes refer to him as an honorary Klansman,” Horowitz says.

After Pierce thanked chapter members for their support in the campaign, the chapter secretary responded: “Let us bid Klansman Pierce God’s speed in his undertakings.”

In an upset, Pierce easily beat Olcott in the November 1922 general election, capturing 57% of the vote — the largest majority in an Oregon governor’s race since 1858.

The anti-private school initiative also passed, albeit by a slightly smaller margin.

After his defeat, Olcott said the Klan’s meteoric rise took him by surprise.

“We woke up one morning and found the Klan had about gained political control of the state,” Olcott told fellow governors at a national conference.

Twelve of the 13 State Senate candidates endorsed by the Klan won election.

“Multnomah County sent an almost solid Klan delegation to the State Legislature,” wrote the Rev. Lawrence Saalfeld in his 1950 master’s dissertation on the Klan in Oregon.

In Southern Oregon, the Klan secured the election of its candidate for circuit judge, C.M. Thomas, over the opposition of nearly all the lawyers in Jackson and Josephine counties, Horowitz wrote. Thomas became the judge overseeing the Medford “necktie” lynching cases.

Perhaps the most significant Klan victory in the legislative session was the Alien Land Act. That bill, signed into law by Gov. Pierce, barred Japanese and Chinese immigrants from owning land in Oregon.

The bill sent a chilling message to Asian immigrants. Yet many Japanese who farmed the Hood River Valley and Multnomah County found ways to put land titles in the names of their U.S.-born children, so the actual impact was not as significant as the Klan hoped.

Pierce also signed a Klan-supported bill barring teachers from wearing religious garb in public schools. The measure was aimed at some 20 nuns wearing habits while teaching in Oregon’s public schools.

Klan-supported bills to end state recognition of Columbus Day (because Columbus was Catholic) and enact a tax on hospitals (many of them operated by Catholics) were defeated.

The romance between Pierce and the KKK frayed as the year wore on. Some Klansman complained they weren’t getting the appointments to various state positions that Pierce had promised them.

But there were ample signs of the Klan’s clout that year. In March 1923, Gov. Pierce and Portland Mayor Baker attended a 500-person banquet at the Chamber of Commerce Building to celebrate Gifford’s birthday. The event made national news in the New York Times.

Oregon had the highest Klan membership, per capita, of any state besides Indiana, according to historian Ben Bruce.

Coming up in Part 3: How the Klan tried to ban Catholic schools.

Last week: How Portland became the virtual headquarters of the Ku Klux Klan in the 1920s.