As Housing Prices Surge, Rent Control Is Back on the Ballot 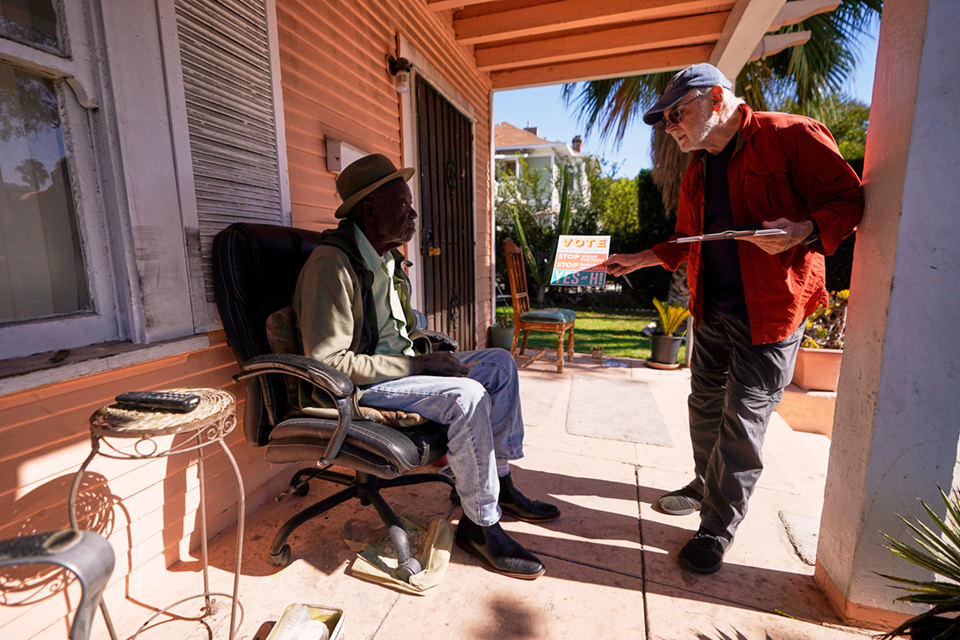 SAN FRANCISCO (AP) — Liberty McCoy was out Saturday urging voters to pass a Nov. 8 ballot measure to limit rent increases in Pasadena because she’s afraid she’ll be priced out of the city where she grew up and where her aging parents live.

The librarian and her husband, a freelance consultant, received notice of a $100 monthly rent increase last year and another for $150 this year, bringing the rent on their home outside Los Angeles to $2,350 a month. They can absorb the increases for now — but not forever.

“A lot of times people are like, ‘Well, just try and pick up and move to someplace cheaper,'” the 44-year-old said. “But I have a job locally, my family, my friends. It would be a big challenge to uproot my entire life chasing cheaper rent.”

With rental prices skyrocketing and affordable housing in short supply, inflation-weary tenants in cities and counties across the country are turning to the ballot box for relief. Supporters say rent control policies on the Nov. 8 ballot are the best short-term option to dampen rising rents and ensure vulnerable residents remain housed.

Opponents, led by the real-estate industry, say rent control will lead to higher prices for tenants in housing not covered by rent caps, harm mom-and-pop landlords relying on rental income for retirement, and discourage the construction of badly needed affordable housing. They have spent heavily to stop ballot initiatives, even going to court to halt them.

In Orange County, Florida, home to Disney World and other theme parks, voters will consider a ballot initiative to limit rent increases to the annual increase in the consumer price index. But a court ruling last week means that even if it passes, it could be nullified.

Proponents in Orlando and other Orange County cities point to a population that has increased 25% since 2010 and rents that jumped 25% between 2020 and 2021 — and experienced another double-digit increase this year. The housing shortage was magnified by Hurricane Ian, with an estimated 1,140 rental properties suffering $44.5 million in damage.

“I’ve had a lot of constituents reach out to me, and they are fearful of becoming homeless. They don’t know what to do,” said Orange County Commissioner Emily Bonilla, who authored the ballot initiative ordinance after hearing from tenants facing rent increases upwards of 100%.

Last year, voters in St. Paul, Minnesota, passed a ballot measure capping rents at 3% a year while residents across the river in Minneapolis backed a measure allowing the city council to enact a rent control ordinance.

This summer, Kingston, New York, became the first upstate city to enact rent control. The measure means around 1,200 units — buildings built before 1974 with six or more units — must limit rents to a percentage set by a rent guidelines board.

Boston's Mayor Michelle Wu was elected last year and made bringing back rent control to the city part of her campaign. The biggest hurdle to that proposal is that Massachusetts voters narrowly approved a 1994 ballot question banning rent control statewide.

“Rent stabilization can provide protections for everyone, but do so in a way that really targets benefits to low-income renters, renters of color, renters who are most desperately impacted by housing instability,” said Tram Hoang, a housing policy expert who was involved in the St. Paul campaign.

The fight over rent control has been most intense out West, where in 2019, lawmakers in California and Oregon approved statewide caps on annual rent increases. California’s annual cap cannot exceed 10% and Oregon’s is set at 7%, plus the consumer price index.

Both laws exempt new construction for 15 years, a compromise to encourage developers to keep building, and apply only to certain units.

But that hasn't quelled tenant activism in California, where nearly half the state's 40 million residents are renters. Advocates say the statewide law — which expires in 2030 — does not go far enough.

Voters in the San Francisco suburb of Richmond and Southern California beachside city of Santa Monica will consider measures to further tighten existing rent caps to a maximum of 3%.

In the city of Pasadena — home to the annual Rose Parade and Rose Bowl college football game — voters will consider a measure to create a rent oversight board and limit rent increases to 75% of the consumer price index, which supporters say translates to 2% to 3% a year.

Rent stabilization advocates failed to collect enough signatures to qualify for the 2018 ballot, and they thought it would be hard this time around because the state had enacted protections. But campaign field director Bee Rooney said tenants financially wrecked by the pandemic were eager to back the initiative.

“Any amount when you’re not expecting it is a lot," Rooney said. "Some people, their rent doubled or went up by 50%.”

Pasadena retiree Paulette Brown received the state-allowed increase of 10% in July, bringing the rent on her two-bedroom apartment to $1,175 a month. Budgeting will be tighter.

“I really can’t afford any mishaps, because I’m not able to save anything," said the 64-year-old Brown, who lives with her daughter and grandson.

Opponents of the measure, which include the national and state realtors associations, say curtailing rent increases to a fraction of inflation will result in property owners taking rentals off the market and doing minimal maintenance.

“What's being proposed here is draconian and for the most part landlords who have good tenants aren’t trying to get rid of them,” said Paul Little, president and CEO of the Pasadena Chamber of Commerce.

Rent-control policies have been around for decades, put in place after World War II in New York City and elsewhere to combat rising housing prices and again in the 1970s in the Northeast and California. However, the real-estate industry has since succeeded in passing state laws that made it difficult, if not impossible, for many local municipalities to cap rents. 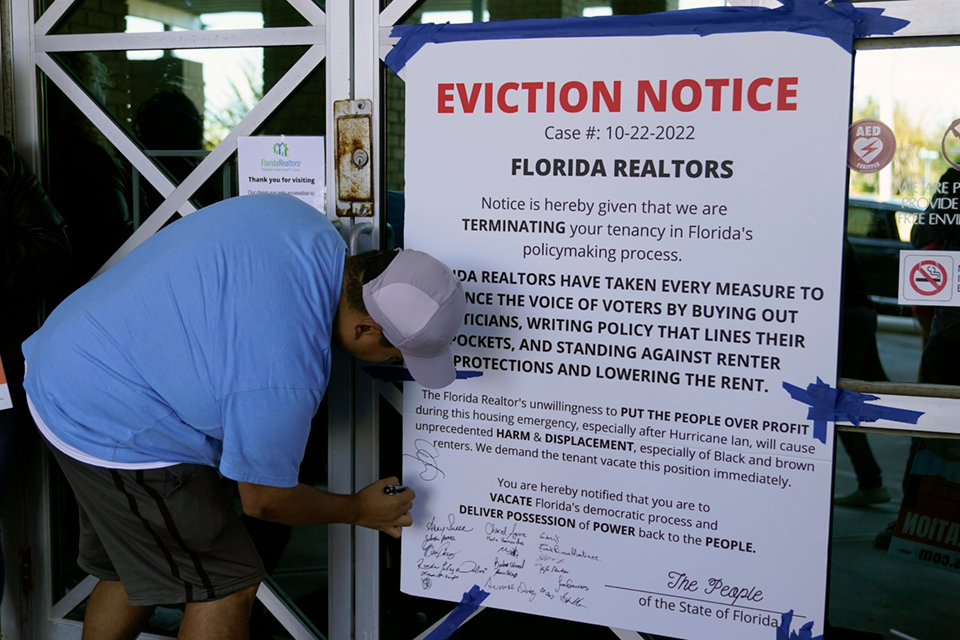 A rent control advocate signs his name to a mock eviction notice during a demonstration in front of the Florida Realtors office building Saturday, Oct. 22, 2022, in Orlando, Fla. (AP Photo/John Raoux)

The data on rent control has been mixed. The policy, according to an Urban Institute report, was found to have reduced rent on covered units in Cambridge, Massachusetts, San Francisco and New York but resulted in no significant decreases in New Jersey cities.

Some studies, however, have shown that rent control can reduce the number of housing units available and discourage landlords from maintaining them.

Opponents also say rent regulation can scare off developers. St. Paul's original ordinance, for example, applied to almost all housing and mandated landlords stick to the 3% cap even with new tenants.

Within weeks, council members were hearing from developers who blamed the new law for scuttling housing projects because they lost funding. Building permits issued for new housing through August plummeted 31% from the four-year average.

In response, the city council approved amendments in September to exempt low-income housing as well as new construction for 20 years. It also allows landlords to raise rents 8% plus the consumer price index after a tenant moves out.

Orange County's ballot measure is up in the air after an appeals court rejected the proposal last week and suggested it won't be certified even if voters approve it.

The court, which acknowledged the state law "set an extremely high bar” for local governments to pass rent control ordinances, said a consultant hired by the county didn't identify a housing emergency — a requirement under a 1977 state law preempting local rent control.

The county plans to file a motion for a rehearing and with ballots already out, the Orange County Supervisor of Elections said it has no plans to issue new ones. Supporters of the measure said they will keep campaigning.

For tenants like Jessy Correa, the setback means she faces a 20% rent increase on her three-bedroom apartment in Orlando come January. The 44-year-old mother of six is already struggling to afford the current rent of $2,300. 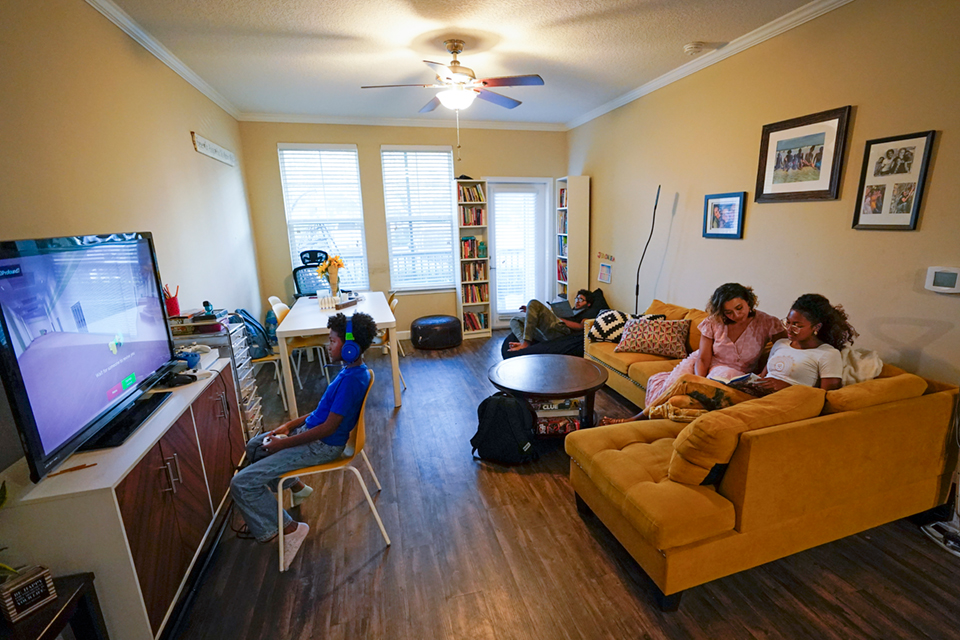 Jessy Correa, second from right, with Genesis Cross, right, Chronicles Cross, back center, and Jerusalem, left, at their apartment Monday, Oct. 24, 2022, in Ocoee, Fla. Correa supports a ballot initiative in Orange County that would limit annual rent increases to the annual increase in the consumer price index. (AP Photo/John Raoux)

A recruiter at a faith-based nonprofit, she was hoping the ballot initiative would “bring stability, give us a moment to breathe.” Instead, she is now forced to make difficult choices, like getting another job.

“Where is the American dream of being able to live, to enjoy?"

she asked tearfully after learning of the court ruling. "What are we doing? It's frustrating.”