In the 1920’s, Oregon’s Klan Focused on Religion, Not Race 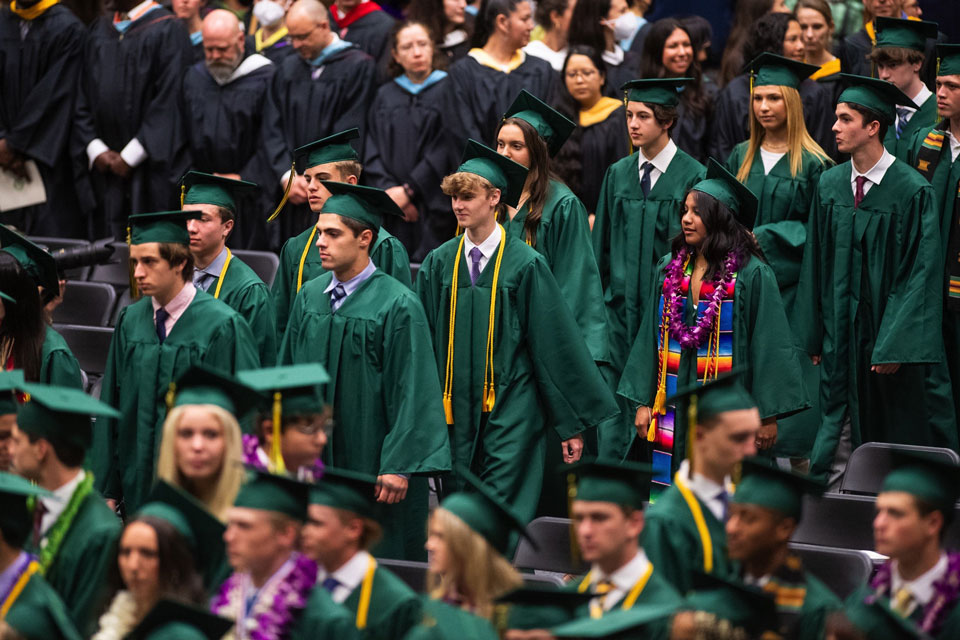 Third in a series

Oregon and the Klan: Part 3

When the resurrected Ku Klux Klan arrived here a century ago and rose to dominate state politics, Oregon was 98% white.

Even in Portland, the Western stronghold of the white-supremacist group, there were only 1,556 Black residents.

So the reconstituted Klan, which spread like wildfire in the early 1920s, chose a new minority group to target — Catholics — part of a newer wave of immigrants who changed the composition and flavor of many American cities.

The first Klan recruiters were dispatched to Oregon from KKK headquarters in Atlanta in early 1921, paid by commission to enlist white, Protestant, native-born men as dues-paying members. The following year, the Klan toppled an incumbent governor and replaced him with a Klan sympathizer. But its bigger plum in that November 1922 election was passage of a ballot initiative that aimed to shut down Catholic schools.

Animosity between Protestants and Catholics had raged in Europe since the 16th century. Those religious rivalries spread to American shores when Europeans established the original 13 colonies, and soon after white settlers came to Oregon.

“Quite literally, anti-Catholicism came west in the luggage of the Protestant missionaries,” wrote Malcom Clark Jr., in a 1974 academic paper for Oregon Historical Quarterly. 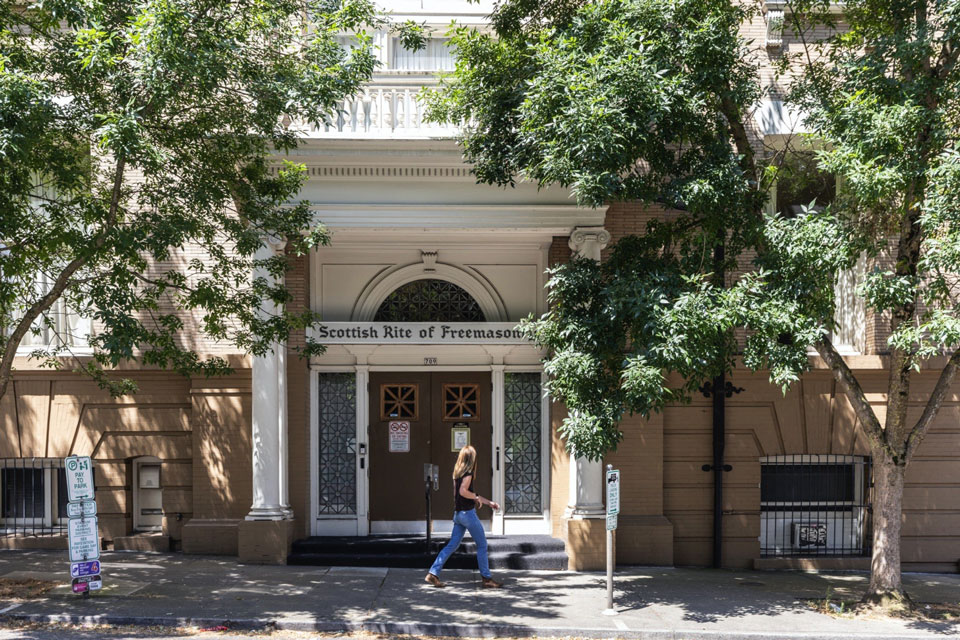 The Scottish Rite Masons, one of the lodges affiliated with the Federation of Patriotic Societies, had pushed bans on Catholic schools in Michigan and other states in the 1920s. Lodge members circulated petitions to qualify an Oregon initiative measure in 1922. (Courtesy Photo: PMG/Jonathan House)At the Klan’s first big public gathering here in December 1921, 6,000 people paid to hear fundamentalist preacher Ruben Sawyer’s lecture on “The Truth About the Invisible Empire of the Ku Klux Klan,” at Portland Municipal Auditorium.

The Klan in those days still hated Blacks and Jews.

“Jews,” Rev. Sawyer told the crowd, “are either Bolsheviks, undermining our government, or are Shylocks in finance or commerce who control and command Christians as borrowers or employees.”

Blacks had nothing to fear from the Klan, Rev. Sawyer said, unless they “sow the seeds of racial hatred among Negroes by teaching social equality.”

Sawyer hinted at what would be the Klan’s bigger target here: Catholics who sought to interject their church into state affairs. Apparently, that meant having the gall to seek public office and educate their children in private Catholic schools.

The Rev. James R. Johnson, who later led the Portland Klan chapter, was more threatening when he addressed a meeting of Salem Klan members. “The only sure way to cure a Catholic,” Johnson said, “is to kill him.”

The openly anti-Catholic American Protective Association had a strong presence in Oregon during the mid-1880s. That helped sow the seeds for the Klan’s attacks a quarter-century later, Clark wrote.

During World War I, Presbyterian minister G. Davidson Buchanan founded a new anti-Catholic group in Portland, the Federation of Patriotic Societies. It was made up of Protestant fraternal lodges and congregations.

One of Buchanan’s leaflets declared that Catholics “are unfit for public office,” Clark wrote. 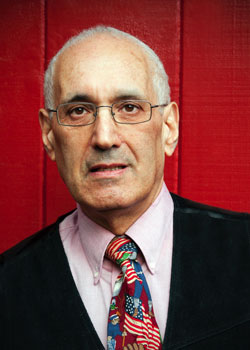 David Horowitz, a Portland State University history professor, says an anti-Catholic coalition gained control of the Portland school board in 1921. (Photo/David Horowitz)“Anti-Catholicism had long been quietly nurtured within the congregations of fundamentalist Protestant churches,” wrote historian E. Kimbark MacColl, in “The Growth of a City,” part of his trilogy on Portland history.

But attacks on Catholics rose to a higher level in the period after World War I, MacColl wrote. That was the peak of a national backlash against the newer wave of Southern and Eastern European immigrants here, many of them Catholic and Jewish.

In 1921, an anti-Catholic coalition gained control of the Portland school board, wrote David Horowitz, a Portland State University history professor who has written extensively on the Klan.

The Scottish Rite Masons, one of the lodges affiliated with the Federation of Patriotic Societies, had pushed bans on Catholic schools in Michigan and other states. Lodge members circulated petitions to qualify an Oregon initiative measure in 1922. The measure would require all youngsters between ages 8 to 16 to attend public schools. That could shut down all religious and other private schools, most of them run by Catholics.

Eckard Toy, a widely respected historian on the Klan in Oregon, wrote that there was “ample evidence” that Fred Gifford, the leader or exalted cyclops of the Portland Klan chapter, helped draft the compulsory public school initiative. Other historians aren’t convinced of that. But Gifford clearly played a pivotal role in the campaign.

By 1922, the Federation of Patriotic Societies was “for all political purposes a Klan appendage,” wrote Linda Gordon in her 2017 book “The Second Coming of the KKK.” 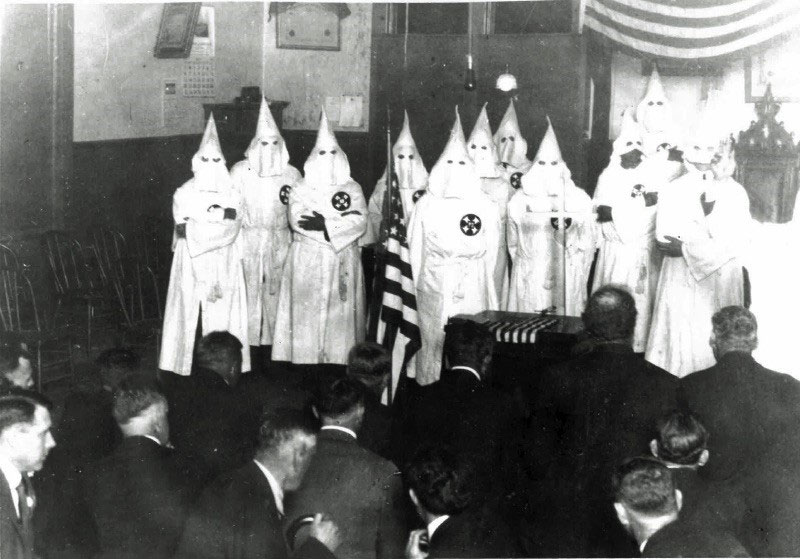 Evidence remains scarce today of the power and sway that a newly invigorated Ku Klux Klan had on Oregon in the 1920s. This photo, from the archives of the Oregon Historical Society, is listed as a Klan “class initiation,” and is dated June 1, 1923. (Courtesy Photo: Oregon Historical Society)Klansmen portrayed the compulsory public school initiative as a patriotic measure that would support their mantra of “100% Americanism.” Public schools could serve to unify the state and assure that new immigrants were integrated into mainstream society, supporters argued.

Striking a populist, anti-elitist stance, Gifford told the editor of Oregon Voter magazine that the measure was “just as much opposed to private schools of the so-called ‘select’ kind as we are to denominational private schools.” Some of those schools were “snobbish,” he said.

Gifford may have been referring to the likes of Portland Academy, founded in 1859 in downtown Portland, which later was merged into present-day Catlin Gabel school.

There also were other private schools run by Lutherans and Seventh-day Adventists, and their advocates joined the Catholic-led campaign against the compulsory public school initiative.

The Scottish Rite Masons, one of the lodges affiliated with the Federation of Patriotic Societies, had pushed bans on Catholic schools in Michigan and other states in the 1920s. Lodge members circulated petitions to qualify an Oregon initiative measure in 1922. (Photo: PMG/Jonathan House)At the time, 9,180 students were enrolled in 39 Catholic schools in Oregon, the bulk of them in Portland, according to the Rev. Lawrence Saalfeld, a Jesuit priest who wrote his 1950 master’s thesis on the Klan, “Forces of Prejudice in Oregon, 1920-25.”

A similar measure likely couldn’t pass in places like New York or Massachusetts, which had large Irish and Italian Catholic populations. But in Oregon, less than 8% of the population was Catholic at the time.

Across the United States, the welcome mat was being yanked from under new immigrants, culminating with the passage of a quota system in 1924. For the next four decades, U.S. immigration policy would largely favor white, Protestant immigrants from Western and Northern Europe. Quotas sharply restricted new immigrants from Southern and Eastern Europe and elsewhere, who tended to be Catholics, Jews and people of color.

Despite a vigorous opposition campaign, the compulsory public school measure passed comfortably in Oregon, garnering nearly 54% of the vote.

The measure was more popular in Portland than in the rest of the state, Horowitz says. Portland had the largest share of the state’s Catholics — and the most Klan members.

Catholic leaders quickly challenged the measure in court, and in March 1924, a federal judge ruled the initiative was unconstitutional.

On June 1, 1925, the U.S. Supreme Court agreed, tossing the measure out before it ever took effect.

The Klan in Oregon

Coming up in Part 4: The Portland media’s spotty coverage of the KKK’s rise

Last two weeks: The Ku Klux Klan sets up a new power base in 1920s Oregon, and especially in Portland, and begins notching political wins.

Oregon's History With the KKK Runs Deep – and Right Through Portland

In the ‘Roaring ‘20s’ the KKK Seized Power Statewide