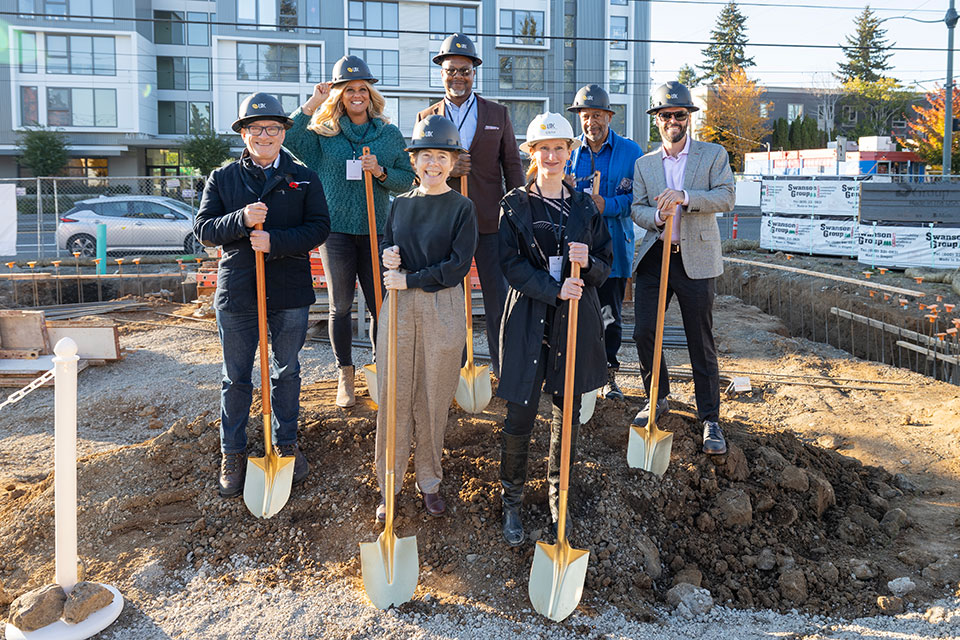 Two local organizations broke ground Monday on a large housing development that aims to return “a thriving Black presence in North and Northeast Portland,” according to stakeholders.

Named 5020 N. Interstate, the 63-unit apartment community in the Overlook Neighborhood is a joint effort between Community Development Partners (CDP), Self-Enhancement, Inc. (SEI), slated to open in late 2023. Eligible tenants must earn 60% or less of the area median income, and the development is geared toward families: 75% of available units will have two or three bedrooms.

SEI will also offer on-site services to its residents, including childcare, afterschool programming, social services assistance, job training and financial literacy courses. The design of the apartment community will include aspects of climate-adaptable, child-friendly urban design, like an outdoor play area and community garden. The mixed-use structures will host 2,500 square feet of commercial space reserved for Black-owned businesses. 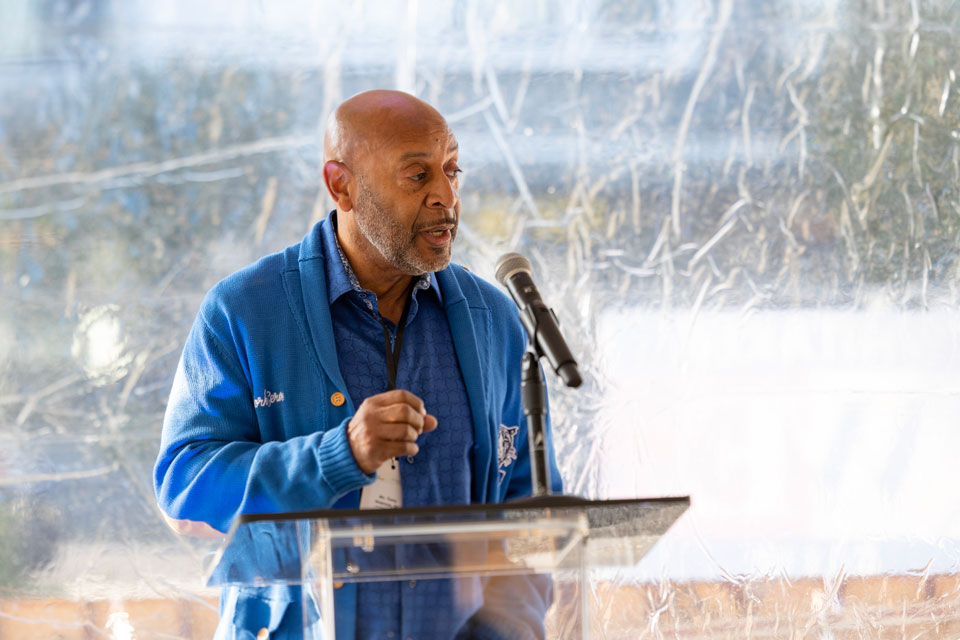 “I grew up in this area,” Hopson said. “I went to Beech Elementary and my mother still owns the house at Humboldt and Mississippi.

"I remember when I-5 went in and I could no longer walk down Humboldt to get to school.

"So when I think about what used to be here and the people who used to be here who are no longer here, to have the opportunity to be a part of partnerships like the one we have with CDP, that are helping to provide low-income housing for some of those folks, so they can have a pathway back, it is just really, really important and meaningful.” 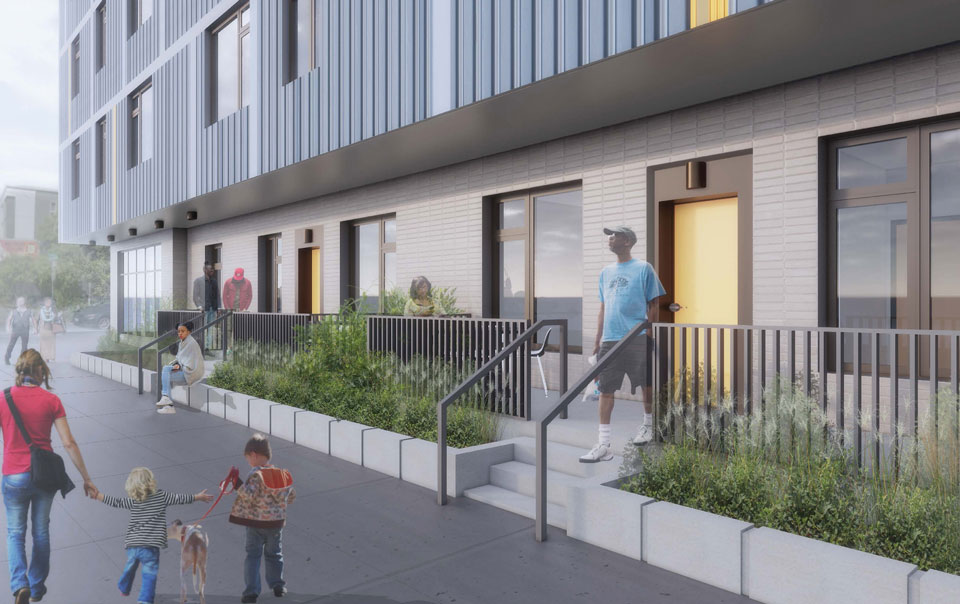 Rendering shows what street-facing units at the 5020 N. Interstate apartments will look like. 5020 N. Interstate is sited near historically Black neighborhoods where many residents and entrepreneurs were driven out by an intersection of racist policies: eminent domain for large public projects and, later, gentrification. As a result, the development is largely geared toward low-income Black residents who have current or generational ties to the area. 5020 N. Interstate will lease to tenants using the city’s North/Northeast Preference Policy, which prioritizes those harmed by such policies and their descendants.

5020 N. Interstate is one of seven projects identified last year to receive $88 million in Metro Housing Bond funding earmarked for the creation of 700 affordable units. 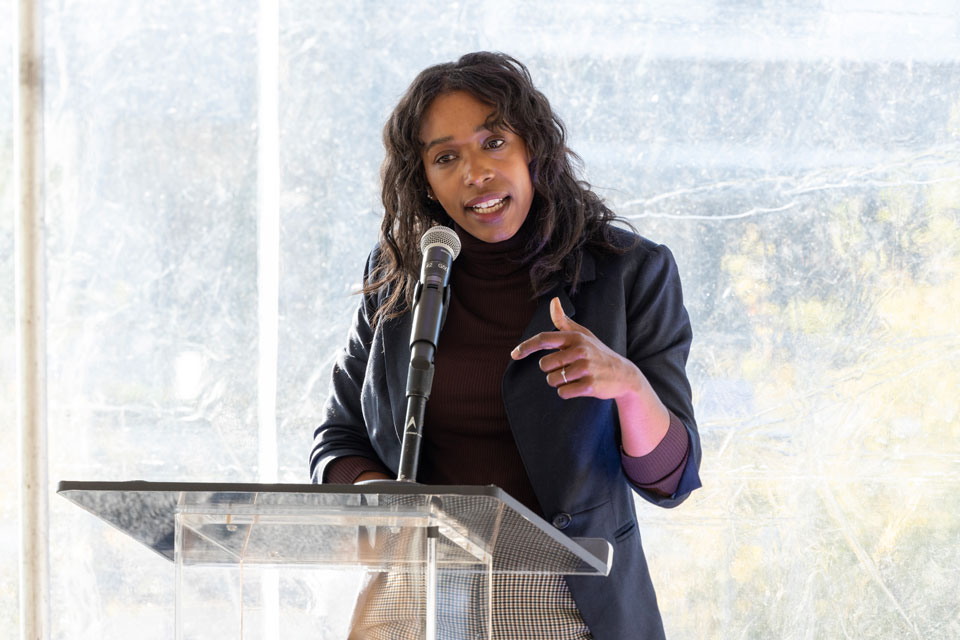 Andrea Bell, executive director of OHCS“(Oregon Housing and Community Services) is committed to addressing the root causes of our housing crisis, including systemic racism and structural inequities, not through words, but action,” OHCS director Andrea Bell said during the groundbreaking. “When we design programs to explicitly reduce racial disparities, we improve outcomes across the system and make them more effective for everyone.

The concept of returning disenfranchised residents of color to North and Northeast Portland is not without its critics within the Black community, many of whom point out that affordable rent in an apartment is poor reparation for what so many Black families lost: Those who had a home or business taken from them in the name of expanding Emanuel Hospital or building I-5 were victims of racist infrastructure policy endemic to the region and country, where roads and other modes of transportation were purposely placed to bisect or completely replace communities of color. Those who owned homes were often compensated poorly through eminent domain, and the resulting displacement meant that Black homeowners were pushed out of areas where real estate would later become much more valuable. The disruption to their lives and livelihoods meant many Black households lost out on wealth-building opportunities their white counterparts continued to enjoy.

“We’re talking about speculation and the developers who are able to get at the land that belonged to African Americans in lower Albina, in North and Northeast, and then build affordable housing that has all kinds of tax incentives and abatements, and profit off of this continuing cycle of ‘push out, eliminate, remove, gentrify,’” Gary-Smith said last week. “That vicious cycle is a very large contributor to housing insecurity and vulnerability for African Americans, for poor people, for people of color. When you look at houselessness and homelessness, there’s also the possibility of being vulnerable because your homes bring profit to others outside of the community and families that we have formed.”

Gary-Smith was speaking broadly about election-season promises to expand affordable housing. The SEI project is distinctive for its services geared specifically to BIPOC tenants, and its commitment to affordability, rather than a market-rate/affordable rate hybrid of rental units.

5020 N. Interstate is funded in part by $9.2 million from a Metro housing bond and $14.7 million in Oregon Affordable Housing Tax Credits. It is part of a larger project called “Alberta Alive” which also includes two similar developments that SEI and CDP will collaborate on: 506 NE Alberta and 4957 NE 8th Avenue, which are slated to open in the middle of next year.

“5020 N. Interstate represents a manifestation of the collective care and commitment to ensuring our community’s basic needs, such as housing, are met,” Bell said. “The pursuit of improving quality of lives through affordable housing requires us to all acknowledge the unjust actions that created some of the very housing issues we face today.”