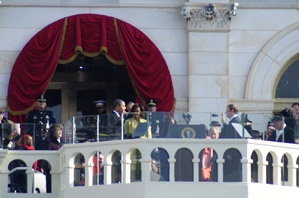 WASHINGTON (NNPA) – Barack Hussein Obama - a Black man - was inaugurated the 44th President of the United States on Tuesday before a historic crowd of at least 1.5 million people.
The first African-American to hold the office, considered the most powerful in the world, his inaugural address and overall ceremony included strong and specific references to the historic and modern-day struggles of Black people; including the "lash of the whip."
"Our journey has never been one of short-cuts or settling for less. It has not been the path for the faint-hearted - for those who prefer leisure over work, or seek only the pleasures of riches and fame. Rather, it has been the risk-takers, the doers, the makers of things - some celebrated, but more often men and women obscure in their labor, who have carried us up the long, rugged path towards prosperity and freedom," he said, reflecting on the hard work - and pains - of building a nation. "For us, they packed up their few worldly possessions and traveled across oceans in search of a new life. For us, they toiled in sweatshops and settled the West; endured the lash of the whip and plowed the hard earth. For us, they fought and died in places like Concord and Gettysburg, Normandy and Khe Sahn."
The "lash of the whip" and the plowing of the "hard earth" were obvious references to Black slaves, once considered only three-fifths of human beings and rarely credited for the work they did to build America. Descendants of those slaves converged by the hundreds of thousands on the U. S. Capitol this week to experience for themselves the historic moment. Their euphoric chants of "O-ba-ma! O-ba-ma!" were heard frequently during quiet moments of the inaugural ceremony as many without tickets packed in beyond the boundaries of the National Mall.
They punctuated Obama's speech with wild cheers as he used words such as "equal" and "free" that African-Americans often long to hear from people of power.
Obama consciously used the same Bible as his hero, Abraham Lincoln, signer of the Emancipation Proclamation that led to the end of American slavery, Jan. 1, 1863, only 146 years ago.
"We remain a young nation, but in the words of scripture, the time has come to set aside childish things," Obama said. "The time has come to reaffirm our enduring spirit; to choose our better history; to carry forward that precious gift, that noble idea, passed on from generation to generation:  the God-given promise that all are equal, all are free, and all deserve a chance to pursue their full measure of happiness. In reaffirming the greatness of our nation, we understand that greatness is never a given. It must be earned."
The historic inauguration comes amidst painful times for America. Obama – with his unique ability to inspire - is viewed as a transitional figure by people of many races and nationalities, particularly during this time of war and economic crisis. But, suffering is consistently greater for African-Americans. To have someone in the White House with a modicum of understanding of and identification with their problems appear to be a salve to many, bringing hope for ultimate equality that has yet to be realized.
"We remain the most prosperous, powerful nation on Earth," says Obama, the son of a Black man from Kenya and a White woman from Kansas.  "Starting today, we must pick ourselves up, dust ourselves off, and begin again the work of remaking America."
Significant parts of the inaugural ceremony sent strong messages that the Obama Administration will maintain its consciousness where Black people are concerned. The "Rosa Parks" bus rolled along in the motorcade before the Inaugural parade, symbolizing the struggle of African-Americans who were legally forced to sit in the backs of buses in the South until Parks took a stand in 1955. Also, among the 90 units participating in the Inaugural Parade were the Tuskegee Airmen, who flew in a segregated Army Air Corp during World War II.
"I'm feeling ecstatic. There was never a time in my life that I would have thought there would be a Black president," said a chuckling Ed Tillman, one of the elite African-American pilots who flew heroically in the all-Black unit.
Most notable were the prayers of Revs. Rick Warren and Joseph Lowery, both of whom blatantly referred to the racial magnitude of the moment.
"We celebrate a hinge-point of history with the inauguration of our first African-American president of the United States," Warren prayed in his invocation. The crowd cheered. "We are so grateful to live in this land, a land of unequaled possibility, where a son of an African immigrant can rise to the highest level of our leadership. And we know today that Dr. King and a great cloud of witnesses are shouting in heaven."
The poem recited by Elizabeth Alexander was also straight to the point: "Sing the names of the dead who brought us here, who laid the train tracks, raised the bridges, picked the cotton and the lettuce, built brick by brick the glittering edifices they would then keep clean and work inside of."
But, perhaps it was the benediction of civil rights icon, the Rev. Joseph Lowery, that hit closest to home. Starting with the final verse of "Lift Every Voice and Sing", the Black National Anthem, Lowery closed with an appeal that is yet to be realized:
"Lord, in the memory of all the saints who from their labors rest, and in the joy of a new beginning, we ask you to help us work for that day when Black will not be asked to get back, when brown can stick around, when yellow will be mellow, when the red man can get ahead, man, and when White will embrace what is right. Let all those who do justice and love mercy say amen."