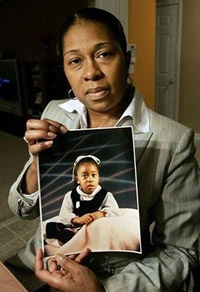 Nykita Hurt holds a photo of her daughter Brandi who became a child prostitute at the age of 14. Experts say more than 300,000 children are being sexually exploited in the United States.

INDIANAPOLIS (NNPA) - Slavery as Blacks know it is permeated with images of Africans stuffed in ships, whipped and beaten beyond recognition, hung on trees and picking cotton. Slavery now has a new face known as human trafficking.
Human trafficking is often confused with smuggling, extortion or simple prostitution. When a person is a victim of human trafficking, they are mandated to work under specific conditions by force. The U.S. is one of the top ''destination'' countries for human trafficking.
''I don't want to devalue the legacy of slavery in this country with real shackles. For people to understand the kind of control someone is under, it's useful to think of this as a modern day form of slavery," said Mark Lagon, executive director of Polaris Project. The Polaris Project is a national organization aimed at ending human trafficking.
Forced labor continues to be a substantial portion of human trafficking yet commercial sex dominates. According to Gayle Helart, Assistant United States Attorney, U.S. Department of Justice, Southern District of Indiana, the crime isn't about the violence or the labor itself, but the money - especially commercial sex.
Unlike African slaves, victims of human trafficking oftentimes come to the U.S. on their own will. They are promised lucrative opportunities such as a job in a hotel or education. Seduced by American culture and the idea of the U.S. as a land of opportunity, victims agree and follow the offender. Once in the states, victims are moved around to different locations, forced to sell their bodies and turn over all of the money to their male or female pimp.
Helart states that due to the glorified lifestyle of the pimp/whore culture, human trafficking isn't taken as seriously as it should be. Victims are in grave danger as many suffer violent acts, or are simply threatened with abuse. To the trafficker, victims are disposable and very little care is taken for their wellbeing.
The control — the desire to ''pay off their debt'' to the pimp, or the need to help families in their native country — keeps victims selling their bodies. Victims' families also may have taken out loans to send their child to the U.S. or must pay back a wavering smuggling fee.
''What keeps victims staying is the promise of something better, the carrot in front of their face,'' said Helart. ''Human trafficking is all about the 'work here, under these conditions, or else.'''
The issue of human trafficking goes even deeper being that young girls are often affected by labor but mostly sex. Black girls are a large part of this growing trend. Girls constantly move around to human sex trafficking hubs most notably Atlanta and Dayton, Ohio. Truth is, human trafficking could be in any neighborhood.
''This crime could literally be anywhere and we wouldn't know it. I'm not saying it's not here (in Indianapolis); I don't know. We do get a lot of leads and that's good,'' said Helart. ''For some reason a lot of offenders let their victims go to church to subdue and keep them from getting rebellious. We try to get with faith-based communities and leaders on this.''
Lagon states human trafficking sounds like it requires someone crossing a border yet there are increasing trends among American-born victims of human trafficking. Law enforcement believes when it comes to juveniles, there's not really a juvenile out there by themselves; a pimp will almost always handle her.
''Studies have indicated that children who are runaways or throwaways, when they try to make their own life on the streets, a huge proportion of them within 48-72 hours fall under the control of pimps,'' said Lagon.
To curb this trend authorities state it's not enough to say ''where have you been for the last few weeks'' when runaways return. Parents should probe further asking questions such as how old is your boyfriend and are there other girls there at his home. If the offender is of an inappropriate age and/or has multiple girls in his home, it's almost certain to be human trafficking.
Parents should also be on the lookout for expensive gifts she can't afford and should watch for the adults in their lives who are showering attention and affection on their kids. Talking to kids and teens about healthy relationships and sexual behavior will further reduce human trafficking.
Furthermore, authorities are taking actions on the financial worth of human trafficking. Because human trafficking is difficult to detect and often rely on the testimonies of the victims, authorities are taking down pimps and Johns. They have also found victories in unofficial ledgers.
''In the blackjack case in Florida, the John would be given a playing card after payment. They'd turn that over to the girl so she'd know services had been paid. In this case, men would wear condoms so the girls were keeping track with condom wrappers. They were told that $20 would get taken off their debt with every sex act,'' explained Helart.
Citizens are asked to be observant in their neighborhoods, jobs and places of worship for suspicious behavior, homes and businesses appearing to keep individuals inside, and individuals who are always accompanied by someone.
For more information, call or visit Polaris Project at (888) 373-7888; the Federal Bureau of Investigation's Innocence Lost initiative at (317) 639-3301; or Gayle Helart at (317) 226-6333.