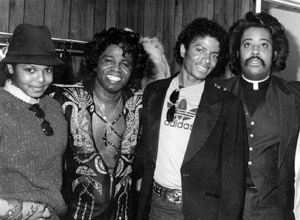 It was the mid-1970s.  The nation was fresh off the heels of the Civil Rights Movement, the Vietnam War was finally over and people began adjusting to a newly, fully integrated society.  Blacks and Whites worked side by side, and women and minorities slowly but surely began to crack open that all too visible glass ceiling in triumphant ways.
As society progressed however, we waited – and yearned – for that one individual who could break the mold in mainstream pop culture and truly make it acceptable to not just speak of equality in all endeavors but transform it into an actuality.  We awaited someone who defied racial impediments and institutional barriers, and could finally normalize African-Americans onto television sets and into living rooms across the country.  That someone who possessed enough raw talent that even the most discriminatory of individuals could not help but respect and acknowledge his or her sheer gift.
Little did we know then that the youngest member of the Jackson 5 was about to revamp our complete social, political and entertainment structure in unfathomable ways, and in the process, reshape the perception of an entire race on the world stage.
I was a young teenager when I first met Michael. We were both blessed to have known the late great Godfather of soul James Brown, who, in many respects, was like a surrogate father to us both. Throughout the decades, we formed a close kinship that many may never be able to comprehend. During his 1984 Victory Tour, Michael and I began working together as I took on the role of his community relations director. In 2002, the King of Pop came to our National Action Network headquarters in Harlem, and he and I marched together to Sony Music along with hundreds of supporters as we fought for Michael's ownership of his own music catalogue. And during his tough trials and legal bouts throughout the years, I openly supported Michael - and that itself will never change.
I was one of the lucky few to have known this Apollo legend and bear witness to not only an exceptional career, but to a compassionate, determined, driven individual whose greatest qualities are often underscored. A man who dominated the charts with sales of some 50 million copies of his 'Thriller' album alone, but who never forgot his humble roots of Gary, Indiana. He was an incomparable artist, dancer and entertainer who dazzled audiences on every corner of the planet, and still created and participated in countless charities.
Penning humanistic, moving lyrics like 'We Are The World' and 'Man In The Mirror', Michael took his message well beyond the TV sets of America.  He was a true groundbreaker who paved the way for many of today's artists who often imitate his signature style, and a man who relentlessly opened endless doors for African-Americans to be acceptable idols around the world. During the 1980s, music channel MTV refused to play videos by Black musicians, but it was Michael's undeniable talent that won him heavy rotation for years to come.
We as African-Americans and people of all races as a whole owe a tremendous deal to Michael Jackson. He not only set the standard for excellence in entertainment, but maintained a positive outlook despite all his trials and tribulations. And in his sheer existence, he forced all of us – White, Black and Brown – to take a good look in the mirror at our own selves, our own truths and our own convictions. Many attempted to vilify and defame Michael; let us not repeat the same mistake after his passing. If he had any shortcomings, they in no way equaled his strengths.
When we suddenly lost the Godfather of soul in 2006, Michael was the only major artist who spoke at his funeral. I'll never forget when he placed his hand on James Brown and said 'I hope he gets in death what he didn't get in life'. I pray the same now for my friend, my comrade and legend Michael Jackson. I hope history will serve him due justice and be more kind than some of our contemporary media. And may he finally attain eternal peace.