In a heartbreaking instant, 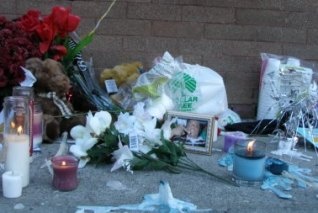 Andre Dupree Payton, 19, was shot and killed last weekend in downtown Portland. The shooting was an outbreak of gang-related violence – but those who knew the teen well say that he was a decent young man who was hanging out with the wrong crowd.
Sam Thompson, in-school coordinator with Self enhancement Inc., has been working with Payton for the last 4 years. "He worked very, very hard to graduate from Grant High School in the class of 2010," Thompson said. "I want to emphasize what a good, good kid Andre was."
"Andre had a light spirit. He had a good sense of humor. And he cared a lot for his family. He took care of his mother, and he has younger siblings that he really looked out for."
And Rob Ingram, of the city's Office of Youth Violence Prevention said the same thing.
"I always found him to be a soft-spoken and well mannered young guy," he said. "You can't help but ask yourself 'what if'…"
Students and staff at Grant High School, who were close to Payton, are struggling to understand the senseless killing of one of their own. Vivian Orlen, Grant's new principal, said the news had been a huge blow to the school community.
"Students and several staff members here knew Andre very well and they are devastated," Orlen said. "He was a young man who was very committed to his education, and he worked very hard to graduate last year. Our hearts go out to his family."
Andre Payton's mother, Salena Harris, told reporters this week she wanted to move her family to Atlanta, where her daughter plans to attend college. She feared for her son – especially after shots were fired at his window, Sept. 18.
The tragedy has left many people wondering how we can make our city safer for teens. 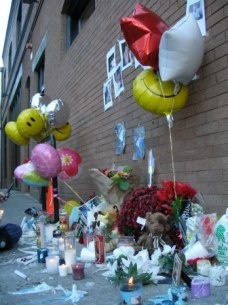 Self Enhancement Inc. is holding a community meeting today, Wednesday, at 6 p.m. at

3920 N Kerby Ave. Portland (503) 249-1721. The plan is to bring people together to work for youth.
Police responded to shooting at around 2 a.m. Sunday, and found the teen lying face down on the sidewalk at NW 2nd Avenue and Couch Street. He was transported to OHSU, but emergency medical staff could not save his life. He died of his injury – a gunshot wound to the chest.
A fund to help the family has been set up at US Bank. Ask to contribute to the account for Andre Dupree Payton.
Police have not yet arrested any suspect. Detectives want to talk to anyone who was there or has any information at all. If you know anything that will help with the investigation, you can call Detective Jim McCausland at 503-823-0449.
The heartbreak of gang violence is becoming all too familiar. Portland's youth gang violence task force has been on high alert since August, when figures showed there had been 70 gang-related incidents this year. By comparison, police report 68 gang-related incidents for the entire year of 2009 and the same number during 2008.
"We had a huge number of incidents during August so we have been really planning and strategizing to keep a handle on this," said Tom Peavey, policy manager in the city's Office of Youth Violence Prevention. Police, parole officers and outreach workers stepped up their efforts to work with gang-involved youth, as well as with local bar and club owners to help them control gang activity.
Initially police were optimistic when only two incidents were reported during the first half of September. Gang violence tends to spiral upward, as each shooting leads to retaliation.
"It is a tragedy," Peavey said. "It is sad to watch a young person's life wasted because of their gang affiliation."
Why the increase in gang violence this year? Commander Dave Benson, of the police Tactical Operations Division, says one factor is the negative influence of older gang members newly released from prison.
"There are a number of gang members and gang affiliates getting out of jail after serving eight or nine years," he told The Skanner News. "They are 'mentoring,' if you will, youngsters on the streets, and keeping the gangs active."
Benson said these men, known as shot-callers – whom he described as unreformed and going nowhere themselves – promote crime, glorify guns and pull vulnerable teens into the gang lifestyle. "They are the folks who actually incite this level of violence. They tell the kids 'It's your turn now,'" he said.
Teens who drop out of school, who have family troubles or live in neighborhoods with a powerful gang presence are at highest risk, Benson said. Youths as young as 14, 15, 16 and 17, are "on the streets and getting into this kind of lifestyle," he said.
Some are attracted by money – a strong lure for youth who have very little spending power, but see their peers at school driving cars and wearing the latest 'kicks'. For youth with family problems who feel uncared for, the draw is the feeling of connection and belonging that gangs can offer.
"There is a great feeling of kinship with these people who routinely interact and care for them, Benson said. "The gang becomes their family,"
Other teens are pressured or forced to join.
"They get beaten up and told: 'You need to join my gang'," Benson says.
Andre Payton had a caring family. His mother last spoke to him at 1 a.m. Sunday, just an hour before his death. Teachers, counselors, friends and others cared for him. Committed to his education, he put great effort into graduating from high school. Sadly, none of these protective factors would save his life.
It takes the whole community, Commander Benson said. "It takes a village – it really does. We all need to be engaged.
"There are a lot of people who care, but it's tough. Frankly there are a lot of guns out there and these youngsters can find some pretty deadly firepower," he said. "By the time a youth picks up a gun and fires it in anger – even if it doesn't hit anyone – that's a pretty sad moment. And our chance of intervening goes right down."

Leaders Reach Out to Grant Students after Andre Payton's Murder

Photos show the shrine at the site where Andre Payton was shot, taken by Brian Stimson.