Carpenters Union Drafts Model Diversity Contract But Will Other Construction Trades Sign On?

By Helen Silvis of The Skanner News
Published: 13 January 2011 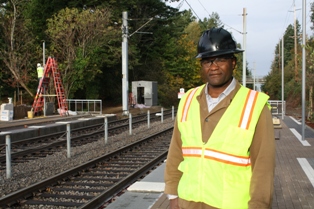 Plans are underway for a raft of major public construction projects that will bring millions of federal dollars into Oregon's struggling economy. Projects set to go forward include:
♦ the $330 million Sellwood Bridge;
♦ the $140 million Oregon Health and Sciences University Sustainability Center;
♦ the $39 million expansion of Portland Community College's Southeast center;
♦ a new $60 million FBI building at Cascade Center; and
♦ the Columbia River Crossing, projected to cost at least $3.87 billion.
"These projects offer a great opportunity to create jobs in our community and also to train people to get well-paid jobs in the future, " says Maurice Rahming, President of O'Neill Electric and of the Oregon branch of the National Association of Minority Contractors. "What many people don't realize is that skilled construction industry jobs are very well paid, and offer a pathway to financial security."
Now a new initiative from the Carpenters Union and the Operating Engineers, Local 701, could open up opportunities to minorities, women and disadvantaged small businesses.
"This can have such a tremendous impact on Portland and the Greater Portland area, increasing diversity among business people and the construction workforce," says Doug Tweedy, executive secretary, treasurer and CEO of the Pacific Northwest Regional Council of Carpenters. "The opportunities are huge, absolutely huge."
What the carpenters have done is to draft a model Community Benefits Agreement that could become standard for Oregon's public works contracts – if other construction unions sign on. It piggybacks on previous work done by the National Association of Minority Contractors, which for decades has protested unfair hiring policies in public projects. 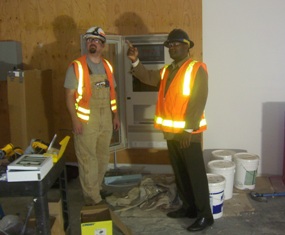 Under the agreement, minority contractors would not have to join the union or pay union dues – a long-term stumbling block. It also would create targets for minority participation and monetary sanctions when targets are not met.
"Our intention, our hope is to get a lot of different government entities to use this document," Tweedy says. 'We have to provide continuity of opportunity. It doesn't do anybody any good, whether part of the workforce, or a minority contractor, to get one job. They need continued opportunities to grow and progress in the industry."
Living-wage jobs are exactly what African Americans, Latinos and Native Americans in the Portland-metro region need. Struggling with unemployment rates 37 percent higher than Whites, according to Portland State University's recent Communities of Color report, the poorest Portlanders have been hardest hit with unemployment rates of above 30 percent.
Yet historically, African Americans, in particular, have been locked out of construction opportunities. Public works projects in Oregon have a dismal record for diversity in hiring and contracting. As previously reported in The Skanner News, for example, Oregon Department of Transportation awarded just three contracts to African American firms over a seven-year period from 2000-2007. So far, the Columbia Crossing project has done no better – with just 1 percent of contracts awarded to Black-owned businesses, so far.
"African American contractors face barriers gaining access to government contracts because of racial bias, as documented in the Oregon Regional Consortium Disparity Study, conducted on behalf of 10 government agencies during the mid-1990s," concludes Karen Gibson, a professor in Portland State University's Toulan School of Urban Studies and Planning. "And the effect trickles down; African American contractors are more likely to hire workers of color, so a barrier to the contractor has a broad impact."
Barriers also have prevented young people of color from entering the industry. Unions were slow to welcome African Americans into skilled trades, either as apprentices or as contractors. One AFL- CIO affiliate had a stated whites-only policy until 1964. Jobs and contracts went to a predominantly white circle of insiders.
Tweedy said the Carpenters and Engineers want to change that legacy. They are committed to diversifying their ranks and making sure everyone has an equal opportunity to enter the construction trades, he says,  simply because it's the right thing to do.
"It's very important to the Carpenters to grow the diversity of our contractor base and the diversity of our membership.
"This is something we should have done a long time ago. There certainly are a lot of people of color out there who are very capable of doing well in our industry if they understand the opportunities out there and have a fair shot at getting into it."
The agreement sets ambitious targets for apprenticeship programs: All contracts over $200,000 would require apprenticeship programs amounting to 20 percent of the workforce. And 20 percent of those apprentices would have to be ethnic minorities, and 15 percent would have to be women. Apprenticeship programs are vital to helping minorities succeed in construction because it takes four years of training to reach journeyman status and the short-term nature of construction work means it is a challenge for apprentices to find continuous work experience.
"I like the concept of setting these number goals because they are doable numbers," says Rahming. "I'm glad that the carpenters are getting on board now, because they have been absent from this conversation for too long. I want to give credit to the mayor and to Multnomah County for taking the lead on this, but in general, I'd say this is a very good start for the unions.
"The challenge is that they don't yet have all the other unions on board."
The Carpenters also make important concessions to small-, women- and minority-owned businesses, saying they do not have to join the union.
"They do have to get the same pay and benefits but that doesn't have to come from the union," Tweedy said. If they can and want to provide equivalent health and welfare benefits, they can do that."
Other key clauses would establish a fund to give technical assistance to minority businesses, helping contractors with the heavy load of government paperwork; and would set up a training fund to support apprenticeship programs.
Former Portland City Commissioner Jim Francesconi, worked with Tweedy to draft the contract language.
"If labor is willing to help finance apprenticeships and technical assistance for minority contractors, then that's what's unique here," Francesconi said. "I don't know anywhere else in the country that is doing that."
Many of the ideas in the Carpenters draft agreement already have been adopted by local government agencies such as, the City of Portland, Multnomah County and TriMet. But Rahming says a strong commitment from all the construction unions could help transform practices -at the state's biggest player: Oregon Department of Transportation.