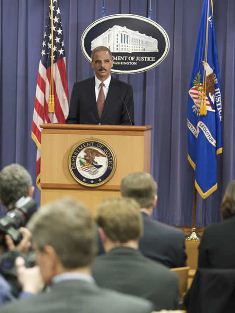 AUSTIN, Texas (AP) -- Attorney General Eric Holder vowed Tuesday to fully enforce civil rights protections in next year's elections amid a flurry of activity by states to redraw political boundaries and impose requirements that could reduce voting by minorities who enthusiastically supported Barack Obama in the 2008 election.

Giving his most expansive speech on civil rights since taking office, the nation's chief law enforcement officer declared that "we need election systems that are free from fraud, discrimination and partisan influence - and that are more, not less, accessible to the citizens of this country."

He urged the country to "call on our political parties to resist the temptation to suppress certain votes in the hope of attaining electoral success."

"Instead, encourage and work with the parties to achieve this success by appealing to more voters," Holder said during an appearance in Austin, Texas.

Currently, the Justice Department is reviewing new requirements in Texas and South Carolina requiring voters to produce a photo ID before casting ballots. The department also is examining changes that Florida has made to its electoral process - imposing financial penalties on third-party voter registration organizations like the League of Women Voters when they miss deadlines and shortening the number of days in the early voting period before elections.

Most of the changes have been promoted and approved by Republicans, who argue they are needed to avert voter fraud. Democrats, citing studies suggesting there is little voter fraud, say the measures are actually aimed at reducing minority votes for their candidates.

Where a state can't meet its legal burden in showing an absence of discriminatory impact, "we will object," the attorney general said in his speech at the Lyndon Baines Johnson Presidential Library and Museum. As president in 1965, Johnson was instrumental in passing the landmark law the Justice Department now uses to ensure voting rights in Texas, South Carolina and all or parts of 14 other states. Most of the 16 states are in the South and all of them with a history of discrimination against blacks, American Indians, Asian-Americans, Alaska Natives or Hispanics.

"Over the years, we've seen all sorts of attempts to gain partisan advantage by keeping people away from the polls - from literacy tests and poll taxes, to misinformation campaigns telling people that Election Day has been moved, or that only one adult per household can cast a ballot," said Holder.

In light of that history, the attorney general announced he supports Democratic-sponsored legislation that would require stiff criminal penalties for distributing false communications such as the wrong date or time for elections, giving inaccurate information about voter eligibility or promoting false endorsements of candidates. The bill was to be introduced Wednesday by Sens. Ben Cardin of Maryland and Chuck Schumer of New York.

Among civil rights leaders on hand for Holder's speech was Wade Henderson, president and CEO of The Leadership Conference on Civil and Human Rights. Henderson said the poll taxes and literacy tests of an earlier era "are today embodied in state laws that require photo IDs to vote and that limit early voting, provisional voting and voter registration."

"Facing an election challenge next year, this administration has chosen to target efforts by the states to protect the democratic process," said Cornyn, a member of the Senate Judiciary Committee.

Johnson's two daughters, Lynda Johnson Robb and Luci Baines Johnson, listened to Holder's speech from the front row of a packed auditorium with other family members.

Holder was appearing in a Republican-controlled state which has taken a redistricting dispute with civil rights groups all the way to the U.S. Supreme Court.

Texas added four congressional seats based on population gains in the 2010 census. Minority groups sued in federal court in San Antonio, arguing the Legislature's redistricting maps did not reflect growth in the state's Hispanic and black populations.

Currently, minorities are the majority in 10 of Texas' 32 congressional districts. A new map drawn by a three-judge federal court in San Antonio would raise that to 13 out of 36 districts, an outcome the judges said better reflected the growth in the state's Hispanic population.

The three-judge panel also drew redistricting maps that appeared to give Democrats a greater chance of winning seats in the Texas state House and state Senate than did the plans approved by those bodies and signed into law by Republican Gov. Rick Perry.

The state went to the U.S. Supreme Court, which agreed to hear the case and blocked the court-drawn maps pending the outcome of the lawsuit.

Earlier, a federal court in Washington had refused to approve the Texas Legislature's redistricting plan without a trial, agreeing with the U.S. Justice Department that there was sufficient evidence to question whether the Legislature hurt minority representation.

"The most recent census data indicated that Texas has gained more than 4 million new residents - the vast majority of whom are Hispanic," said Holder. "However, this state has proposed adding zero additional seats in which Hispanics would have the electoral opportunity envisioned by the Voting Rights Act."

On the voter ID issue, Texas Democrats, voting-rights advocates and minority groups had harshly criticized the photo ID law, but were unable to block its passage in the Republican-controlled Legislature.

In September, the Justice Department's civil rights division said it needed the racial breakdown and counties of residence of the estimated 605,500 registered voters in Texas who do not have a state-issued license or ID. The division also asked how many of voters have Spanish surnames. Under the federal Voting Rights Act, the new Texas law needs Justice Department approval to take effect.