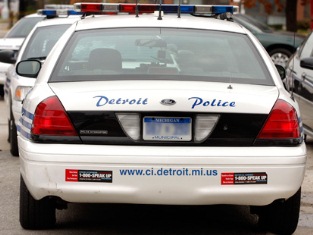 DETROIT (AP) -- Fighting crime is a 24-hour job, but Detroit police stations will be sticking to business hours.

The department is rolling out a plan to close precincts and district headquarters to the public after 4 p.m. It's an effort to put more officers on patrol, especially in the most besieged neighborhoods, without adding to the city's $200 million budget deficit.

The policy took effect this week in an especially tough area on the city's east side. Over the next month, the practice will spread to the six other stations.

At the first precinct to adopt the new system, Michael Morris stopped by to make an accident report. He said he would reserve judgment.

"Let's see the response time on the street," Morris said. Then he'll be able to say if it's working.

Officers are still inside the building around the clock, but at night public access is limited to a phone in the foyer linked to a 24-hour crime-reporting unit.

Smaller communities have adopted the same approach, but Detroit will be the largest American city to try it. Police Chief Ralph Godbee said the idea would "re-engineer" how the department operates.

Closing precincts to the public by late afternoon is not expected to save money. It just reassigns officers and their duties. Two clerks have typically staffed the midnight shift at each precinct, and a recent survey by the chief's office showed they take an average of only two reports each night, Godbee said.

Like many police departments, Detroit's force is under severe financial constraints. The city has about 2,700 officers, down from 4,000 a decade ago. Another 100 officers could be laid off by next month without federal grant money.

There are few areas to make cuts other than jobs, something the police chief and Mayor Dave Bing are loath to do, particularly in light of the city's violent crime rate, one of the highest in the country, and a spike in murders.

Compounding matters is Detroit's size: 139 square miles. Although the population has fallen from 1.8 million in 1950 to 700,000 today, officers must still patrol a large area.

"We have done a disservice to our community by spreading ourselves thin, giving citizens the belief that we will respond to things that are not an emergency," Godbee said. The changes are mainly "for those brave men and women that are overtaxed out there" answering calls for service.

Godbee expects to put 100 to 150 officers more officers on patrol.

Restricted and light-duty officers are being moved to the 24-hour unit that will handle non-emergency calls that might normally have gone to the front desk at neighborhood precincts. That part of Detroit's policy was gleaned from Milwaukee, which began a similar program in 2008. Milwaukee officers who in the past would have handled complaints in person can now be sent to areas with rising crime.

"If we don't stay in public spaces, crime goes up and citizens lose heart," Milwaukee Police Chief Edward Flynn said. But his department has not reduced the hours its seven precincts are open to the public.

Some smaller police departments, including in Detroit's better-off suburbs, already close their front desks during slower evening hours. But Nancy Kolb, a senior program manager with the International Association of Chiefs of Police, has not heard of any city the size of Detroit adopting a similar policy.

A lot of agencies are turning to volunteers to work the front desks and using more social media.

"It's not always possible for an officer to go to neighborhood watch meetings, but residents can use social media to engage with that officer," Kolb said.

Bing, who is trying to keep Detroit from being taken over by an emergency financial manager, is cutting 1,000 city jobs in the next few weeks. Services like fixing lights and sidewalks and cutting grass are being reduced. The mayor is also seeking medical and pension concessions from city unions.

Other cities are reluctant to tinker with their police forces, even if doing so might save money.

Officials in Baltimore, which has a deficit of more than $50 million, have not considered cutting hours at their nine police precincts and headquarters, largely because such a step would close doors on community outreach.

"We have a lot of situations where people come into the districts to report crime," police spokesman Anthony Guglielmi said. "It's a big part of our community policing."

In New Orleans, eight district offices are open around the clock. Most are staffed overnight by a desk sergeant and two officers.

"You have citizens who will still feel more comfortable reporting crime by coming into the districts," New Orleans police spokesman Frank Robertson said.

In Detroit, the precincts have often been seen as islands of safety.

"I really don't know how it's going to work," said Ardella Jackson, who also filed an accident report Tuesday at the precinct with shorter hours. "We don't really like changes."

Godbee has stressed that the precincts won't be abandoned at night. And though there will be no access to front desk areas, a limited number of officers will be inside performing other duties. But he prefers people become familiar with the telephone reporting system for non-emergencies such as neighbor complaints, property damage reports and fender benders.

"If the situation calls for me to have an officer come to the station to deal with them," he said, "I would rather do that than have that officer sitting there like the Maytag repair person."