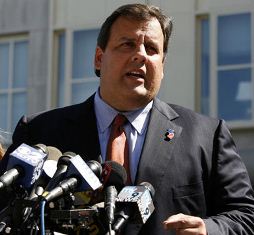 TRENTON, N.J. (AP) -- Gov. Chris Christie has apologized for a remark he made about civil rights but says he's not sorry for using a slang term to describe a lawmaker who compared him to segregationist Southern governors.

Christie, a Republican, spoke Tuesday night during TownSquare Media's "Ask the Governor" program on radio station New Jersey 101.5 FM. He apologized to anyone offended by his comment that people in the civil rights struggle of the 1960s would have been happier to have the matter settled by public vote rather than by dying in the streets. He was comparing civil rights to the fight for gay marriage.

But he didn't back down Tuesday from calling Democratic Assemblyman Reed Gusciora "numb nuts" after the lawmaker compared him to former Govs. George Wallace, of Alabama, and Lester Maddox, of Georgia. He says his late mother used the term.

Democratic Assembly Speaker Sheila Oliver, one of several black leaders in the state who had chastised the white governor for his civil rights remark, said she was glad he addressed the matter.

"The governor rightfully acknowledged the hurtful and insensitive nature of his remarks," Oliver said in a statement issued after the radio show had aired. "Going forward, I now trust and expect that, as the legislature moves toward implementing marriage equality, the governor will respect the serious nature of the constitutionality of civil rights and equal protection under the law."

Oliver and other state Democrats had held a news conference in Trenton on Monday with Democratic U.S. Rep. John Lewis, of Georgia, to take Christie to task for his comments.

Lewis, an icon of the civil rights movement, said that court and congressional actions were necessary to secure rights for blacks and that no referendum ever would have been successful.