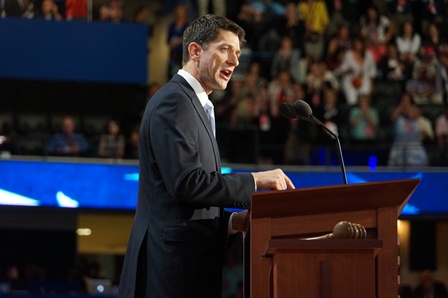 Editor's Note: As the Republication National Convention concludes, ethnic media journalists and commentators weigh in on what they were tracking during the confab. Some were on the ground in Tampa, FL, and share their observations of the gathering. Many noted that one key issue of concern across ethnic groups – immigration – was hardly mentioned.

In Tampa for the Republican National Convention, what I see downtown is not a reflection of America in the 21st century. Rather, it seems more like a throwback to 1950s TV America.

It is unfortunate that this [presidential] race has devolved into something equivalent to turning back the hands of time; a sort of collective nostalgia for, and selective amnesia of, "The Good Old Days"; a time when minorities and women were on the margins, or non-existent, in the mainstream of American society.

It is unfortunate and sad that following the last election cycle, four years ago, when the air was filled with hope and optimism, many in the GOP are now trekking down the road of negativity and cynicism, propagating outright lies to win this election.

I would hope that forward thinking Americans will galvanize their forces once again in November to show that we can embrace the diversity that reflects what this country really is in the 21st century. We must continue down the road we have paved, a more expansive path that allows all to participate in our democracy, and engage in a constructive discourse that can move our country forward.

Hao-Nhien Vu, editor of Bolsavik.com, a blog focused on the Vietnamese-American community

I think of party conventions as basically a pep rally, so I don't expect too much substantive discussions. So I fall back on watching the personalities. Who's included, who's not included. I found it extremely interesting that the RNC couldn't arrive at some compromise with Ron Paul to have him speak at the convention.

For all the Republicans' efforts and calls to repeal Obamacare, I haven't heard too much about it at the convention and certainly not any suggestion on what they would do to replace it, as their solution for the health insurance problems. [During his speech accepting his party's nomination, Gov. Mitt Romney said he would repeal Pres. Obama's healthcare reform law if elected.]

Of all the issues that can be addressed at the Republican convention, I don't think there are any particular issues that are more or less important to the Vietnamese-American community than to the country at large. The latest numbers show that Vietnamese-Americans' party registration are about equal between Republicans and Democrats, so there is a bit of harsh partisanship, but not any worse than for all Americans as a whole.

I said "issues that can be addressed at the Republican convention," because there is one overwhelming issue of concern to Vietnamese-Americans, and that is the communist dictatorship in Vietnam. That, however, is not an issue that the Republicans talk about, or even pay attention to.

I have spoken so far with two Filipino-American delegates at the convention [who are] both from California.

The first is a business owner. He says he strongly believes in the party's stance of small government…that is, less governmental control and less regulation. He personally believes this is beneficial to the [Filipino] community and the American people, in general, especially as he is an entrepreneur and he doesn't want to pay higher taxes.

The second is a younger delegate from Los Angeles who told me that given the significant number of undocumented Filipinos, including DREAMers, he believes Romney and the Republican Party will create an immigration reform law that will be fair for everybody. That Romney will come up with a constitutionally-aligned solution.

Republican party leaders and members are strikingly vague in discussing specific immigration policies that Romney might implement if he is elected as president. When I ask Filipino Republicans at the convention about what will happen to the 12 million undocumented workers in the United States, they don't provide any specific answers.

There's nothing in what they are doing at RNC that I am interested in. Their statements aren't ones I would agree [with]…As someone who works in the media, I should be [watching the coverage], but I'm not following it closely.

There seems to be a general opinion among…the readers of my newspaper who I talk to that there aren't that many things we are hopeful for at this time. I don't want to sound pessimistic, but the Obama administration was a disappointment and Romeny won't be any better. [Under Obama, there were] lots of empty promises and disappointments. There isn't much in the Republican agenda that Arab Americans would subscribe to. At the same time, the Democrats haven't done a good job either. So, you're in limbo so far…there's some sense of discontentment with both.

We are disappointed with Obama's policies on immigration, the Middle East and the economy -- many of the same things that we would hear from Americans, just more focused on Arab American issues. When he [Obama] was running for president, in part of his speeches about immigration reform, he said he would pass humanitarian immigration reform, but nothing has been done so far. We have seen things under the Obama administration that we didn't see under Bush…such as the assassinations in some parts of Afghanistan.

Our readers here in the San Joaquin Valley -- when we talk about the San Joaquin Valley, we talk about farmworkers and undocumented immigrants -- they have fought for AgJobs and deferred action. Education, jobs, economic development are huge. But what they're looking for beyond that is immigration. That's what people sort of miss [in the Republican National Convention].

They know Kris Kobach helped draft the immigration portion of the Republican platform. Next to Pete Wilson [the former California governor who won a second term in 1994 as the chief backer of Proposition 187, the ballot measure designed to deny undocumented immigrants access to most public services], I think Kris Kobach is really the bogeyman in terms of the Latino community.

The Republican Party says they are against any form of amnesty. How do you tell that to the 1.7 million people who were brought over through no fault of their own? They want to contribute to society.

Another part of the GOP platform supports state efforts to reduce illegal immigration. Those are efforts that the Latino community does not care for.

That's something that [New Mexico Governor] Susana Martinez [can't address]. She struck down efforts to make driver's licenses available [for undocumented immigrants]. Having a person of color is not enough to make gains in a community where Republicans have failed.

I think the best speaker they have for the Latino community is Jeb Bush -- he is speaking tonight (Aug. 30). He understands Latino issues a lot better than anyone else in the Republican Party. He has come out against Republicans who criticized deferred action; he's asking for Republicans to tone down the rhetoric.