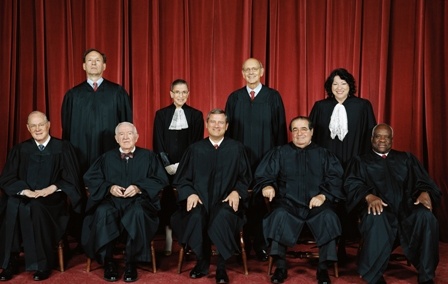 WASHINGTON (CNN) -- It was no Halloween trick that dogs were on the docket at the Supreme Court on Wednesday.

Franky, a chocolate Labrador, and Aldo, a German shepherd, are both police dogs in Florida but their cases were front and center at oral arguments in an important review of Fourth Amendment rights.

At issue is whether subsequent searches can be sought when canines get a whiff of suspected drugs or other contraband from outside a home or a car.

Two separate appeals from criminal defendants could have a far-reaching impact on when a person's private contents can be subjected to a search without clear probable cause or a valid search warrant.

The Fourth Amendment grants the "right of the people to be secure in their persons, houses, papers, and effects, against unreasonable searches and seizures."

The issue of citizen privacy has been particularly acute since the 9/11 attacks. Federal and state governments have stepped up surveillance of suspected terrorists and their allies and high-risk targets, like government buildings and shopping malls.

The Supreme Court in recent years has generally given law enforcement some latitude to conduct their duties in a heightened security environment, but not without some checks.

The cases argued on Wednesday also come as recent studies have raised questions about the accuracy of canine drug alerts.

The first case dealt with Joelis Jardines. Miami-Dade police, acting on a tip, went to his front door six years ago with Franky in tow. The animal quickly responded, barking in the driveway, sniffing at the door, then sitting as he was trained-- a signal drugs were nearby.

A detective testified he, too, smelled an unusual odor and noticed the air conditioning running continuously, along with the presence of moth balls on the stoop, used to mask scents. The officers remained nearby on the premises while a search warrant was obtained. Marijuana was found growing in the house.

The Florida Supreme Court overturned the conviction, concluding the warrantless use of Franky was "unreasonable government intrusion into the sanctity of the home."

The high court -- especially in this case -- appeared ready to pare the discretion of officers to conduct surveillance outside a private residence then rely on marijuana odors to secure a warrant.

"It seems to me crucial that this officer went onto the portion of the house to which there is privacy," said Justice Antonin Scalia, "and used a means of discerning what was in the house that should not have been available in that space."

Justice Ruth Bader Ginsburg said that unlike trick-or-treaters, or a door-to-door salesman, there was no implied consent for the presence of police in this case.

"You can say, yes, there's an implied invitation to the Girl Scout cookie seller, to the postman, even to the police officer, but not police officer with dog, when the only reason for having the dog is to find out if there's contraband in the house," she said.

Gregory Garre, arguing for the state, cited 2005 U.S. Supreme Court precedent that concluded dog sniffs are not an invasion of privacy.

On the other side, several justices said the defendant's actions in part contributed to police bringing a drug dog and initiating a search.

Howard Blumberg, Jardine's public defender, told the court this was a clear violation -- "exactly what a narcotics detection dog is doing, revealing details in the home the individual seeks to keep private."

Justice Samuel Alito shook his head, saying that reasoning, "is so broad, it is clearly incorrect."

Roberts wondered whether a drug sniff from the sidewalk would be acceptable. Blumberg said while not a "search," it was not permissible, since the homeowner's privacy was still being violated.

The second case involved Clayton Harris, who was stopped by a sheriff's deputy in Liberty County outside Tallahassee in 2006 for an expired license tag.

The officer brought in Aldo the shepherd, who focused on the truck's door handle. A subsequent search produced 200 pills inside the vehicle used to make methamphetamine.

Harris was charged, and the state high court also later reversed the conviction.

Those justices found the dog to be unreliable, since a few weeks after the initial search, the man was again stopped in his vehicle and the dog again alerted the door handle for the presence of drugs. But this time, none were found.

The state high court concluded the state's general assertion a dog was sufficiently "trained" and "certified" was not enough alone to establish probable cause justifying vehicle searches.