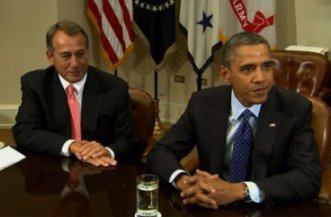 WASHINGTON -- In the chess match of the fiscal cliff negotiations, President Barack Obama and House Speaker John Boehner are narrowing the divide between their positions while contending with discontent among their respective ranks.
Boehner on Tuesday proposed what recently was the unthinkable for Republicans -- letting tax rates go up on income above $1 million as a short-term step to avoid some of the fiscal cliff while continuing to negotiate a broader deal.


The White House and Democratic leaders immediately rejected Boehner's move, saying the focus should be on a comprehensive deficit-reduction agreement instead of a partial step that no one likes.

It was the latest in a series of concessions by both sides since last week's school shooting in Connecticut that killed 20 youngsters.

Asked if the massacre affected what had been incremental negotiations, Boehner said: "I think both sides would agree to that."

"This is a difficult time for Americans," he said, adding that "it's not a time to put Americans through more stress."

At the White House, spokesman Jay Carney acknowledged that the Newtown tragedy had affected all Americans and "reminds us what really matters," but he stopped short of saying it had directly impacted the talks.

"It's obviously hard to know what the impact of an event like that is on the way that lawmakers and others in Washington approach other issues," Carney told reporters. He later added, "To the extent that an event like that, as tragic as it is, brings us a little closer together, both in the nation and in Washington, that would be a good thing, but it's hard to measure an impact like that."

The latest back-and-forth in the negotiations came two weeks from the end of the year, when automatic tax increases and spending cuts of the fiscal cliff will take effect.

At a news conference after meeting with House members Tuesday, Boehner called his new proposal a "plan B" to prevent tax rates from rising on everyone next year as part of the fiscal cliff.

The Ohio Republican told reporters it was important to have a "backup plan" to hold down most tax rates while continuing to negotiate a broader agreement. A Republican source told CNN that Boehner's plan B also would include GOP priorities to make permanent the current estate tax and alternative minimum tax.

While addressing part of the fiscal cliff, the Boehner plan B would leave intact government spending cuts, including defense, that are required under a budget deal reached last year to raise the federal debt ceiling. Known as sequestration, the cuts were intended to motivate Congress to reach a deficit-reduction deal to avoid them.

Facing an insistent Obama and pressure from some in his own party, Boehner already had conceded on higher tax rates for wealthy Americans as part of the broader talks on an agreement to reduce the nation's chronic federal deficits and debt.

His plan B proposal Tuesday further demonstrated the lack of leverage Republicans have on the issue.

Obama has made clear that allowing tax rates to go up on top income brackets was a non-negotiable demand to ensure that the wealthy contribute more to deficit reduction.

Under Obama's plan, which polls consistently show has strong public support, tax rates from the Bush era would be extended for families who earn less than $250,000. The higher rates of the 1990s would be assessed on incomes above that threshold.

As part of the broader talks, Obama on Monday raised the threshold for the higher tax rates to $400,000. The Boehner proposal would set the threshold at $1 million.

Democrats claimed Boehner made the plan B offer because he knows he can't get conservative House Republicans to back the agreement he is negotiating with the president.

"The Republicans in the House have rejected their own speaker's proposal at this stage," Rep. Xavier Becerra of California told reporters. "So, this stage it seems like the real negotiation and fight is among Republicans."

"It would be a shame if Republicans abandoned productive negotiations due to pressure from the tea party, as they have time and again," Reid said.

Boehner's spokesman, Michael Steel, shot back that the plan B proposal gave Democrats exactly what they wanted -- higher tax rates on millionaires. He noted the Senate passed a similar measure in 2010, saying that to oppose Boehner's plan now would make Democrats responsible for failing to avoid the fiscal cliff.

That brought a response from a spokesman for Democratic Sen. Charles Schumer of New York, who came up with the 2010 compromise that never won House approval.

Since the 2010 vote, "we've had an election on the president's tax plan, the president won, and Republicans can't turn the clock back," said the spokesman, Brian Fallons.

"It's not surprising Republicans are having buyer's remorse, but we need higher revenues now," Fallons said. "The more revenue we raise upfront through a tax rate increase on the wealthy, the less likely the middle class will get hit on the deduction side."

Carney made a similar point, telling reporters that Obama wants to lock in the increased revenue from higher tax rates on top income brackets now. Expected negotiations next year on a broader reform of the tax system would be "revenue neutral," meaning the changes would result in no increase or decrease of overall tax revenue, Carney said.

Conservatives trying to shrink the federal government generally oppose increasing tax revenue. They are particularly opposed to higher tax rates because history shows that once rates go up, it is difficult to later reduce government revenue by lowering them again.

Obama and Democrats argue that increased revenue, including higher tax rates on the wealthy, must be part of broader deficit reduction to prevent the middle class from getting hit too hard.

The president previously said that once Republicans agreed to higher tax rates on wealthy Americans, he would be willing to compromise on spending cuts and entitlement reforms sought by Boehner as part of what the president calls a balanced approach.

Obama's latest offer brought the two sides billions of dollars closer, but it also generated protests from the liberal base of the Democratic Party because it included some benefit cuts in entitlement programs such as Social Security, Medicare and Medicaid.

Justin Ruben, executive director of MoveOn, the liberal movement that backed Obama's presidential campaigns, said the group's members would consider any benefit cuts "a betrayal that sells out working and middle-class families."

In particular, he cited concessions that Obama made in his Monday counteroffer, including a new formula for the consumer price index applied to benefits.

"If such a deal were proposed by the president and speaker, MoveOn members would expect every Senate and House Democrat to do everything in their power to block it," Ruben said. A litany of other progressive groups and politicians also expressed their opposition to what is known as chained CPI.

Carney, however, said Obama's latest proposal includes a provision "that would protect vulnerable communities including the very elderly when it comes to Social Security recipients." He called the president's acceptance of the chained CPI a signal of his willingness to compromise to reach a deal.

The chained CPI includes assumptions on consumer habits with regard to rising prices, such as seeking cheaper alternatives, and would result in smaller benefit increases in future years. Labor unions and advocacy groups for the elderly oppose it.

Over the weekend, Boehner offered for the first time to accept tax-rate increases on household income of $1 million and above, sources said. The speaker also offered to allow the president to raise the debt ceiling in 2013 without a messy political fight, another key Obama demand.

The president also included for the first time the chained CPI sought by Republicans, and dropped an extension of a payroll tax cut from the past two years.

According to the source who provided CNN with details of Obama's counteroffer, it includes $1.2 trillion in revenue increases and $1.22 trillion in spending reductions.

However, Boehner disputed those figures Tuesday.

"The White House offer yesterday was essentially $1.3 trillion in new revenues for only $850 billion in net spending reductions," he said. "That's not balanced in my opinion."

Obama's latest proposal included $130 billion in spending savings due to changes in the CPI.

However, Republican aides estimate that the CPI would increase tax revenues by an additional $95 billion over Obama's estimated $1.2 trillion, putting the total revenue figure of the president's latest proposal closer to $1.3 trillion.

The GOP aides also do not count Obama's estimated $290 billion in savings on national debt interest accumulation because they do not consider these savings real cuts. Therefore, the Republican aides said, Obama's plan fails to offer a 1-1 ratio of spending cuts and revenue that Boehner would consider balanced.

Carney took exception to the Republican math, telling reporters Tuesday that counting reduced interest on national debt was a legitimate savings counted in budget plans by both parties for years.

Obama and Boehner met face to face at the White House on Monday for 45 minutes, their third such meeting in eight days in a sign of an acceleration in the fiscal cliff negotiations. They also spoke by phone later Monday.

Congress had been scheduled to end its work last week, but legislators returned to Washington on Monday and leaders warned members to be prepared to stay until Christmas and return after the holiday until year-end.

Last week, U.S. Rep. Chris Van Hollen, D-Maryland, said a deal would have to be reached by Christmas to allow time for the legislative process to approve the required measure or measures by the end of the year.