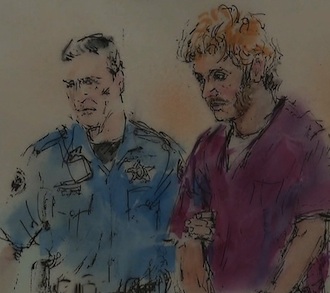 CENTENNIAL, Colorado (CNN) -- James Holmes sat in the interrogation room in his T-shirt, white socks and boxers.Gone was the body armor that police found him wearing when they encountered him outside a movie theater where scores of people had been shot. Police had cut it off.

Craig Appel -- the lead detective in the investigation into the 12 killings at the Century Aurora 16 Multiplex Theater in Aurora, Colorado -- testified Tuesday that paper bags had been placed over Holmes' hands to potentially preserve evidence. As Holmes was being interviewed, he used the paper bags as puppets.

He played with his polystyrene drinking cup as if it were a piece in a game. Appel said

He removed a staple from the table and tried to stick it in an electrical outlet, the detective testified.

Asked by a defense attorney if he had ordered a blood test for Holmes, Appel said he had not.

"There were no indications that he was under the influence of anything," he said.


Appel testified that investigators found 76 shell casings at the auditorium where Holmes is accused of killing 12 people and wounding 58 more on July 20, at a midnight movie showing. Most of the spent rounds -- 65 -- were .223 caliber, while six were shotgun shells and five were .40 caliber.

The details came on the second day of Holmes' preliminary hearing, which could last all week. It is meant to prove to Arapahoe County District Judge William Sylvester that prosecutors have enough evidence to proceed to trial.

Attorneys for Holmes, a 25-year-old former neuroscience graduate student at a nearby university, are expected to seek a "diminished capacity" defense that could prevent the case from getting that far. Some of their questions during cross-examination have also suggested they are trying to make it appear Holmes might have been under the influence of something the night be was arrested.

The term "diminished capacity," according to the Colorado Bar Association, relates to a person's ability or inability "to make adequately considered decisions" regarding his or her legal representation because of "mental impairment or for some other reason."

Also Tuesday, prosecutors played the first 911 calls from the movie theater shooting as they continued building their case at a preliminary hearing.

The recording was loud, chaotic and difficult to understand. There was too much sound to make out what the caller was saying.

Just one thing is unmistakable: the sound of gunshots. At least 30 of them. In 27 seconds.

Detective Randy Hansen testified that the first call to authorities came 18 minutes after the film started. More trickled in until the torrent was complete: 41 calls in all, he said.

Because the movie was still playing and, in at least one, the gunman was still stalking the theater, the calls are difficult to make out. In one, a 13-year-old girl called to say her cousins had been shot. A 911 operator tried to lead the sobbing girl through performing CPR on one who was still breathing.

Family members of victims attending the hearing held each other and choked back tears as the calls were played.

After detailing the calls, prosecutors turned to the intricate explosive web authorities say Holmes left in his apartment, including jars of homemade napalm with bullets suspended inside and topped with thermite, a material that burns so hot it is nearly impossible to put out.

In photos displayed in court, the mixture looked like amber-colored gelatin.

Elsewhere in the sparsely decorated apartment, a container of glycerin hung connected to a tripwire, ready to tip into a frying pan that held a homemade substance that would have sent sparks flying onto carpets soaked in oil and gas, setting them aflame, FBI bomb technician Garrett Gumbinner testified. A robot sent inside discovered the tripwire.

He said Holmes also told him that he had left a boombox by a trash container outside his apartment rigged to start playing loud music 40 minutes after he turned it on.

Next to it, Holmes said, he left a remote-control toy car and a control device that would set off the explosives inside his apartment, Gumbinner testified.

Appel said someone took the boombox into an apartment where police recovered it and found Holmes' prints on it. They never located the toy car, he said.

Also, Steve Beggs, a supervisory agent for the Bureau of Alcohol, Tobacco, Firearms and Explosives, testified that Holmes had purchased 6,295 rounds of ammunition and four firearms beginning in May. Ten weeks before the attack, on May 10, he bought two canisters of tear gas over the Internet, Beggs said.

He was still buying materials into July, Beggs said, testifying that authorities have video of Holmes buying an accessory at a Colorado gun store on July 1. In the video, he said, Holmes' hair is bright orange.

In Monday's first day of testimony, police officers recounted arriving at the movie theater to find a detached, sweaty Holmes outside and a horrific scene inside the theater, where the floor had become slippery with blood and cell phones rang unanswered.

Holmes was a doctoral student in Aurora, in the neuroscience program at the Anschutz Medical Campus of the University of Colorado, Denver, until he withdrew a month before being arrested outside the bullet-riddled movie theater. He had been a patient of a University of Colorado psychiatrist, according to a court document filed by his lawyers.

Holmes did not speak during Monday's hearing. His bushy hair and long beard contrasted with the bright red hair and close-cropped facial hair he sported during previous appearances.

During portions of the hearing, family members of victims held one another, sobbing.

Security was tight. Spectators had to pass through a metal detector and then were searched again before entering the courtroom. At least nine armed officers stood guard inside, some of them scanning the audience packed with reporters and victims' family members.