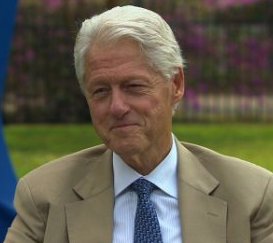 On the fiftieth anniversary of the U.S. Presidential Medal of Freedom, President Barack Obama will award the honor to a group that includes former President Bill Clinton and Oprah Winfrey, the billionaire media mogul.

First established by President John F. Kennedy, the medals are the highest award given by the government to civilians. Clinton and Oprah are among the sixteen recipients of this year's awards that were announced by the White House on Thursday.

"The Presidential Medal of Freedom goes to men and women who have dedicated their own lives to enriching ours," Obama wrote in a statement along with the list of award recipients. "This year's honorees have been blessed with extraordinary talent, but what sets them apart is their gift for sharing that talent with the world. It will be my honor to present them with a token of our nation's gratitude."

Others on the roster include two former lawmakers - former Sen. Richard Lugar of Indiana, who was defeated by a Republican challenger in a primary contest in 2012, and the late Sen. Daniel Inouye of Hawaii, a Democrat who died late last year.

Aside from Winfrey, the media world is also represented on the list of honorees by Ben Bradlee, the Washington Post editor who oversaw the paper's coverage of the Watergate scandal.

Representing American scientific achievement will be Sally Ride, the first American female astronaut to travel to space, who will be honored posthumously, and Mario Molina, a chemist who discovered how certain pollutants deplete the ozone layer.

Gloria Steinem , the women's rights activist and writer, will also be honored, as will civil rights leaders

In sports, awards will go to Ernie Banks, a baseball hall of famer who played 19 seasons for the Chicago Cubs, and Dean Smith, the longtime head coach of the University of North Carolina basketball team.