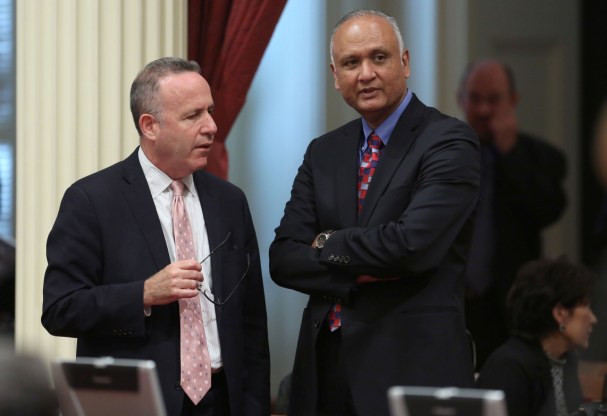 SACRAMENTO, Calif. (AP) — Nearly 20 years after California became the first state to ban the use of race and ethnicity in college admissions, a proposal to reinstate affirmative action has sparked a backlash that is forging a new divide in the state's powerful Democratic Party and creating opportunity for conservatives.

The debate is unfolding in the nation's most populous and most ethnically diverse state as an unrelated U.S. Supreme Court ruling upholds voters' rights to decide whether racial considerations should factor into university selections.

The California proposal would allow voters to rescind their state's affirmative action ban, but unexpected pushback from families of Asian descent who mobilized through Chinese-language media, staged rallies and organized letter-writing campaigns has all but killed the measure this year.

“I was surprised,” said Sen. Ed Hernandez, D-Covina, the author of the bill. “I didn't expect it.”

Asian-American students are enrolled at many of California's top schools in numbers far greater than their proportion of the state's population. Critics of Hernandez's plan worry that qualified students would be dismissed simply because of their ethnicity.

The ensuing debate has reopened an old fissure over the role of race in college admissions, divided Democrats along racial lines and created an opportunity for the California GOP.

California voters were the first in the nation to ban the use of affirmative action in university admissions in 1996. Hernandez's proposal was his fourth attempt to undo that action, which he says harms black and Latino students.

A similar voter-approved ban in Michigan was upheld by the nation's highest court Tuesday, but that ruling is not expected to change the discussion in California, where the prohibition is likely to remain in place independent of the court decision.

Hernandez's proposal sailed through the state Senate in January on a Democratic Party-line vote. Legislative leaders, however, pulled the bill before it could be debated in the Assembly after the harsh reaction.

The controversy highlights the complexity of racial politics in California, where the public school system has struggled for decades to improve achievement. Critics of the affirmative action ban say it's part of a school system that fails black and Latino students.

Blacks and Latinos are more likely to attend the state's lowest-performing schools than their white or Asian counterparts, affecting their ability to be accepted into four-year universities, where they are underrepresented.

Rather than debate Hernandez's proposal, lawmakers now plan to hold hearings about affirmative action and other aspects of campus equality.

The state's governing party has split along racial lines. Three Asian-American senators, all Democrats who were seeking higher office at the time, withdrew their support of the bill after being bombarded by public criticism.

Six black and Latino lawmakers have since withdrawn their endorsements of Sen. Ted Lieu, who is Chinese-American, in a Los Angeles-area congressional race where he faces another Democrat in the primary. And some black and Latino Assembly members this month withheld votes from unrelated legislation about the state's carpool program by Assemblyman Al Muratsutchi, D-Torrance, who is Japanese-American.

The Senate's Democratic leader, President Pro Tem Darrell Steinberg, acknowledged the animosity. He said in a statement that he wanted “a serious and sober examination” of affirmative action, adding “I am deeply concerned anytime one ethnic group turns on another.”

At some campuses, including UC San Diego and UC Irvine, Asian-American students accounted for more than 45 percent of admitted freshmen last year.

Hispanics have slightly overtaken whites as the largest ethnic group in California, although both groups represent about 39 percent of the population. Asian-Americans — a population that includes Filipinos, Chinese, Indians, Japanese, Vietnamese, Laotians and others — comprise about 13 percent. Blacks are less than 6 percent.

Hernandez said nothing in his proposal would impose quotas based on ethnicity, which have been ruled unconstitutional. He said race, ethnicity and gender would be added to a list of factors college admissions officers already consider, such as extracurricular activities and family income.

“Rather than create a wedge, my idea is to have a real public debate about this,” he said. “What's wrong with talking about race?”

Asian voters are a rising political force in California, said Karthick Ramakrishnan, a political science professor at the University of California, Riverside and director of the National Asian American Survey.

While they typically lean Democratic, the voting bloc is not strongly loyal to either party, meaning “if you're trying to either win or defeat a statewide proposition, you ignore Asian-American voters at your peril,” Ramakrishnan said.

Republicans have struggled to attract younger and non-white voters since 1994, when Republican Gov. Pete Wilson supported Proposition 187, a proposal that banned immigrants in the country illegally from access to most social services, and the constitutional amendment that prohibited the use of racial considerations in education, state hiring and contracting, Proposition 209 in 1996. Arizona, Florida, Michigan, Nebraska, New Hampshire, Oklahoma and Washington subsequently adopted similar bans.

Republicans are now capitalizing on the controversy by targeting upwardly mobile Asian-Americans. Peter Kuo, a Republican candidate for state Senate, has been outspoken on the issue during his campaign for an eastern San Francisco Bay Area district that is 40 percent Asian-American.

“The Democratic Party is the party using the name of equality and diversity to lower the standard and preventing us from going into higher education,” said Kuo, who came with his family from Taiwan when he was 14.

“I can't go and tell my kids, 'Hey, because you're Asian you can't get into the school you want,'“ he said.