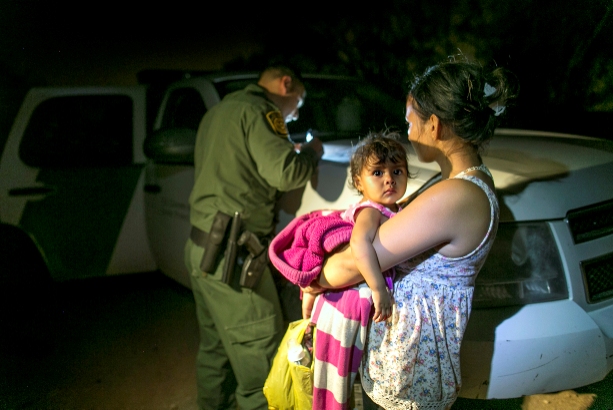 In this photo taken July 3, 2014, Flor Garcia, 19, of Honduras, holding her one-year-old daughter, Flor Fernandez, turned themselves over to Customs and Border Protection Services agents after crossing the Rio Grande from Mexico near McAllen, Texas. About 90 Hondurans a day cross illegally from Mexico into the U.S. at the Rio Grande near McAllen, according to the Honduran Consulate, and the families are then brought to Central Station in McAllen and each is released on their own recognizance. Though most travelers have enough money to purchase their own bus tickets to meet family in cities across the U.S., many have nowhere to stay before the buses leave, and most are in need of rest, medical attention and sustenance. It falls to the local government and charities to welcome the uninvited visitors to America. (AP Photo/Austin American-Statesman, Rodolfo Gonzalez)

Republicans demanded speedier deportations, which the White House initially had supported but left out of its proposal after complaints from immigrant advocates and some Democrats. The top House and Senate Democrats pointedly left the door open to them.

"It's not a deal-breaker," said House Minority Leader Nancy Pelosi, D-Calif. "Let them have their face-saver. But let us have the resources to do what we have to do." Her spokesman Drew Hammill later clarified that any changes "must ensure due process for these children."

In the Senate, Majority Leader Harry Reid, D-Nev., said: "I'm not going to block anything. Let's see what comes to the floor."

Reid and Pelosi made their comments as House Speaker John Boehner, R-Ohio, and Senate Republican leader Mitch McConnell, R-Ky., both said they didn't want to give Obama a "blank check" to deal with the crisis of tens of thousands of unaccompanied children arriving at the Texas border, many fleeing gang violence and drawn by rumors they would be able to stay in the U.S. Boehner and McConnell indicated policy changes would be necessary to win their support.

"We want to make sure we actually get the right tools to help fix the problem," McConnell said. Obama "needs to work with us to get the right policy into effect."

The developments came as Obama's Homeland Security secretary, Jeh Johnson, defended the emergency spending request at a hearing of the Senate Appropriations Committee. He said that without the money, the U.S. Immigration and Customs Enforcement and Customs and Border Patrol agencies would both run out of money in the next two months, and the Homeland Security Department "would need to divert significant funds from other critical programs just to maintain operations."

At issue is a law approved in 2008. Passed to give protection to sex trafficking victims, it requires court hearings for migrant young people who arrive in this country from "noncontiguous" countries — anywhere other than Mexico or Canada.

Because of enormous backlogs in the immigration court system, the result in the current crisis is that kids streaming in from El Salvador, Honduras and Guatemala are released to relatives or others in the U.S. with notices to appear at long-distant court hearings that many of them never will attend.

Republicans want the government to have the authority to treat Central American kids the same way as kids from Mexico, who can be removed quickly unless they convince Border Patrol that they have a fear of return that merits additional screening.

"I think clearly we would probably want the language similar to what we have with Mexico," Boehner said.

White House officials have said they support such changes and indicated last week that they would be offering them along with the emergency spending request. But immigration advocates objected strongly, saying children would be denied legal protections, and the White House has not yet made a formal proposal.

Asked Thursday about the issue, Johnson said he supported changing the law to treat children from Central American nations the same as those from Mexico.

"We want the flexibility in the current situation to have that discretion," he said.

Advocates said they remained strongly opposed and expressed anger that after comprehensive immigration reform failed to advance in Congress this year, lawmakers may be headed toward a vote on deporting minors more quickly.

"They weren't able to get immigration reform done in this Congress and this is going to be the only piece of immigration that gets done, a bill that says we're going to deport children fleeing violence faster," said Marielena Hincapie, executive director of the National Immigration Law Center. "If Democrats can't stand up to this and be the party that's protecting children and refugees, it's a really sad day for the country."

More than 57,000 unaccompanied children have arrived since October even as tens of thousands more have arrived traveling as families, mostly mothers with their children.

Many are trying to reunite with family members and to escape a spike in violence in their countries, but they also report hearing rumors that once here, they would be allowed to stay. Republicans blame Obama policies aimed at curbing deportations of immigrants brought into the country illegally as children for contributing to those rumors, something Obama administration officials have largely rejected.

The situation has complicated the already rancorous debate over remaking the nation's immigration laws at a moment when Obama has declared legislative efforts to do so dead and announced plans to proceed on his own executive authority to change the flawed system where he can.