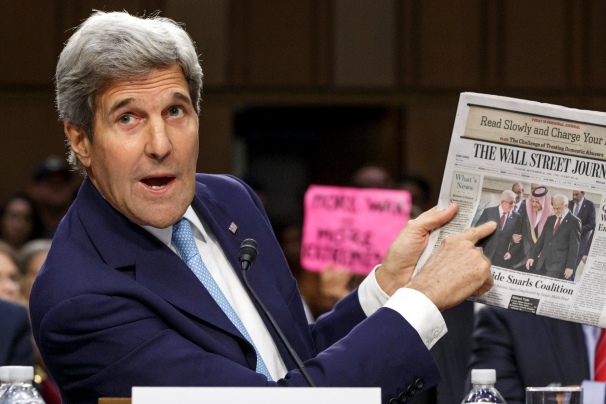 PHOTO: Secretary of State John Kerry points to a newspaper photo of the recent Arab summit in Saudi Arabia as an example of the kind of coalition he expects in combating Islamic State extremists in Iraq and Syria, on Capitol Hill in Washington, Wednesday, Sept. 17, 2014. Kerry appeared before the Senate Foreign Relations Committee to shore up President Barack Obama's strategy to combat the terrorists. Obama reaffirmed Wednesday that he does not intend to send U.S. troops into combat against the Islamic State group, despite doubts about the ability of Iraqi forces, Kurdish fighters and Syrian rebels to carry out the ground fight on their own. (AP Photo/J. Scott Applewhite)WASHINGTON (AP) — President Barack Obama's request for congressional backing to train and arm Syrian rebels battling Islamic State group militants is halfway home, after approval by the GOP-controlled House sent the issue to the Senate, where leaders in both parties say it's expected to pass handily.

Obama won support from staunch Republicans who typically are reflexively against him and lost the votes from some of his most loyal Democratic allies in the 273-156 House tally. Republicans backed Obama by a more than 2-1 margin; Democrats backed him as well, but to a lesser degree.

Top leaders of both parties stood with the president despite reservations that his strategy of arming moderate rebel groups could backfire or won't be enough to blunt the advance of Islamic State group forces. Obama has pledged airstrikes as well but is adamant that he won't send U.S. combat troops to battle the Islamic extremists.

"We must pursue a comprehensive and sustained counterterrorism strategy, and a bipartisan coalition in the House voted to support a critical component of that strategy," Obama said after the vote.

The Senate was to vote Thursday on the measure, which was added to a must-pass, stopgap spending bill to keep government agencies operating into December.

The measure is the last major business on Capitol Hill before lawmakers depart this week to return to their districts and states to campaign for re-election.

The new authority is part of $500 million that Obama requested in May to train and equip Syrian rebels. The cost, to be covered by leftover war funding from this year, generated virtually no discussion among lawmakers, who focused instead on the possible consequences of a new military mission not long after a war-exhausted nation largely pulled out of Afghanistan and Iraq.

Testifying before a Senate committee Wednesday, Secretary of State John Kerry said the forces seeking to create an Islamic caliphate "must be defeated. Period. End of story."

On that there was agreement. The question now is whether Obama's plan will work. GOP hawks called the president's approach too little, too late, even as many of them supported it as a first step in a broader campaign against Islamic State group extremists, who have taken large swaths of Iraq and Syria and shocked the world by beheading two American journalists and a British aid worker.

Despite their doubts, top House Republicans saw little choice but to back the president.

"I am not convinced this train-and-equip effort will change the balance of power on the ground anytime soon, and I believe this approach comes with great risks," Majority Leader Kevin McCarthy, R-Calif., said. But he also said "voting against this request would send a terrible message" about America's determination and willingness to stand with its allies.

Democrats proved to be a harder sell, backing Obama 114-85.

"We simply don't know if somewhere down the line it will turn our guns back against us," said Rep. Loretta Sanchez, D-Calif., giving voice to a fear that rebels seeking the removal of Syrian President Bashar Assad would prove unreliable allies eventually.

"It's hard to see how putting weapons in the hands of folks whose primary objective is to defeat Assad advances the cause of defeating ISIS," said Rep. Chris Van Hollen, D-Md., usually a staunch Obama ally. "Assad is an obstacle to ISIS," he added, using an alternative name for the Islamic State group.

As the House voted, Rep. James Lankford, R-Okla., a nearly sure bet to win an open Senate seat, sent out a fundraising appeal focusing on the Islamic State group threat and criticizing the president. "While our 'commander' in chief is playing golf and taking ambiguous stances on this great threat we need, now more than ever, strong leaders in the Senate willing to take the fight to ISIS' front door instead of waiting passively for them to come to us," Lankford wrote.

In the Senate, backing from the top Democratic and Republican leaders ensures swift passage, even as some in the rank and file were lining up against the effort.

"I have seen no evidence that the Syrian rebels we plan to train and arm will remain committed to American goals or interests," Sen. Joe Manchin, D-W.Va., said. "Further, the opposition fighters that we will train care more about overthrowing Assad than they do about defeating ISIS. Assad is evil, but he is not a threat to America."

The underlying spending bill prevents a government shutdown at month's end and also renews the charter of the Export-Import Bank, which helps finance purchases of U.S. exports. That postpones until June a battle between tea party forces opposing the bank and business-oriented Republicans who support it.

The legislation also includes $88 million to combat the Ebola outbreak in West Africa.