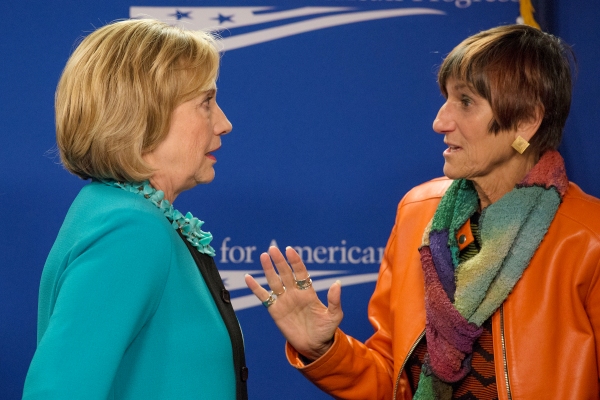 PHOTO: Former Secretary of State Hillary Rodham Clinton talks with Rep. Rosa DeLauro, D-Conn., after taking part in a forum sponsored by the Center for American Progress, Thursday, Sept. 18, 2014 in Washington. Democrats are trying to persuade women to vote in the fall midterm elections as they work to keep their Senate majority. (AP Photo/Molly Riley)

WASHINGTON (AP) — Former Secretary of State Hillary Rodham Clinton said Thursday that voters need to turn pay inequity and women's economic security into a political movement in the November elections and beyond, pointing to an issue that could animate a future presidential campaign.

Clinton, the Democratic former senator and first lady who is considering another presidential bid, said policy issues like raising the minimum wage, equal pay for women and providing families with access to quality, affordable child care need to be prominent in the upcoming elections.

"When we can turn an issue into a political movement that demands people be responsive during the election season, it carries over," Clinton said. "These issues have to be in the life blood of this election and in any election."

Clinton spoke at a forum sponsored by the Center for American Progress, which was formed more than a decade ago by veterans of her husband's administration, where she was joined by House Democratic Leader Nancy Pelosi of California, Sens. Kirsten Gillibrand of New York and Patty Murray of Washington and others. The panel was moderated by Neera Tanden, the center's president and Clinton's former policy adviser.

Democrats are trying to persuade women to vote in the fall midterm elections as they work to keep their Senate majority. Female voters could hold the key in several competitive Senate races, including North Carolina, Iowa and Colorado, and Democrats are hoping female candidates in Kentucky and Georgia can help them win in Republican-leaning states.

For Clinton, who could become the nation's first female president if she successfully seeks the White House in 2016, the round table discussion offered a window into what could become part of a future policy message. Clinton has long advocated on behalf of women and girls around the globe and promoted economic policies aimed at helping working mothers, such as extended leave for family and medical issues, raising the minimum wage and pay equity.

Clinton said if the level of employment among women was raised to the same level as men, the nation's economy would benefit. Referencing the need to break the glass ceiling for women, she said the issue of economic security resonates with women and families across the nation.

"The floor is collapsing. You talk about a glass ceiling — these women don't even have a secure floor under them," she said.