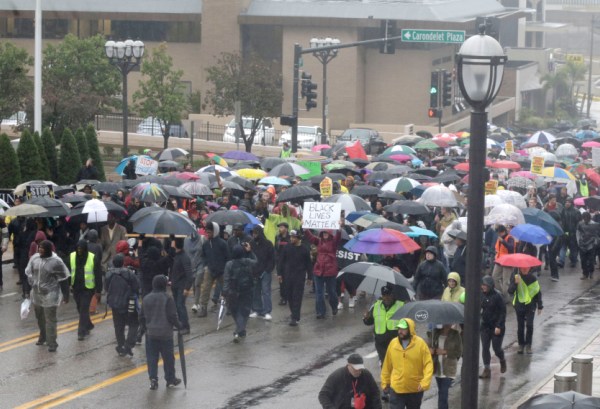 FERGUSON, Mo. (AP) — Missouri police have been brushing up on constitutional rights and stocking up on riot gear to prepare for a grand jury's decision about whether to charge a white police officer who fatally shot a black 18-year-old in suburban St. Louis.

The preparations are aimed at avoiding a renewed outbreak of violence during the potentially large demonstrations that could follow an announcement of whether Ferguson police officer Darren Wilson will face a criminal trial for the Aug. 9 death of Michael Brown.

Police and protesters have repeatedly clashed since the shooting, which prompted a national conversation about race and police tactics. Images of officers in riot gear and armored vehicles confronting protesters have drawn widespread criticism.

Many protesters want Wilson indicted for murder. Grand jury proceedings are secret, but legal analysts say recently leaked information about Wilson's testimony to investigators may be an attempt to prepare the public for the possibility that he might not be charged.

The decision could be made public within the next month.

In the meantime, law officers have adjusted their tactics to interact more peacefully with protesters while also honing their procedures for quick, widespread arrests. They plan to have a large contingent of officers at the ready, but have been meeting with clergy, community leaders and students in hopes of building relationships that could ease tensions on the streets.

"I know there's a lot of anxiety, there's a lot of fear, anticipation" about that announcement, said Missouri State Highway Patrol Capt. Ron Johnson, who was put in charge of security in Ferguson in the days after Brown was killed and is now part of a coordinated command with local police. But "I have a lot of hope."

Law enforcement officers expect to receive at least a day's notice before a grand jury announcement. That should provide time for them to execute security plans but may also allow demonstrators to prepare.

"The moment I learn that there is, in fact, a non-indictment, then there's going to be an organized protest," said Eric Vickers, a black St. Louis attorney and civil rights activist.

Brown was unarmed when Wilson encountered him walking in the street with a friend. A scuffle ensued and Brown was shot multiple times. Witness accounts of what happened varied, with some people saying they saw Brown raise his hands as if in surrender.

Wilson told investigators he felt threatened while fighting with Brown from inside a police SUV, where an initial gunshot was fired, according to information provided to several news outlets by people described as familiar with the investigation, but not otherwise identified. After Brown fled the vehicle, Wilson said Brown turned around in a threatening manner, prompting the officer to fire the fatal shots, according to those accounts of his testimony.

Wilson's description of events was leaked recently, as was an autopsy report that showed Brown had marijuana in his system and was shot in the hand at close range. Wilson has alleged Brown was trying to grab his gun in the SUV.

"It appears that it may be calculated to soften the blow if there is no indictment," said Peter Joy, a law professor at Washington University in St. Louis who directs the school's Criminal Justice Clinic.

But, he said, "it's conceivable that if the leaks are from law enforcement that perhaps there may be an indictment and this is calculated to garner public sympathy for officer Wilson."

Wilson's attorneys have denied being the source of the reports.

Law enforcement agencies have declined to say whether they will proactively line the streets with more officers as the grand jury announcement is made or position them in strategic locations to react as needed.

St. Louis County Police Chief Jon Belmar said he's learned it works better to let sergeants and lieutenants retain their normal place in the chain of command, instead of supplanting them with higher-ranking officers.

Police are attempting to better document events and handle widespread arrests more efficiently. To ensure the state Highway Patrol is at full strength, it is limiting trooper vacations around the time of a potential decision, and local police may be put on longer shifts.

Belmar, Johnson and other law officers have been meeting frequently with clergy, students and community leaders. Pastors, in turn, have been preaching messages of non-violence.

Earlier this week, Democratic state Sen. Jamilah Nasheed, of St. Louis, intentionally got arrested for refusing to leave the street in front of the Ferguson Police Department. Even that was an act preparation. Nasheed said she wanted to show others that "you can peacefully protest, but you don't have to be violent under the banner of justice for Michael Brown."