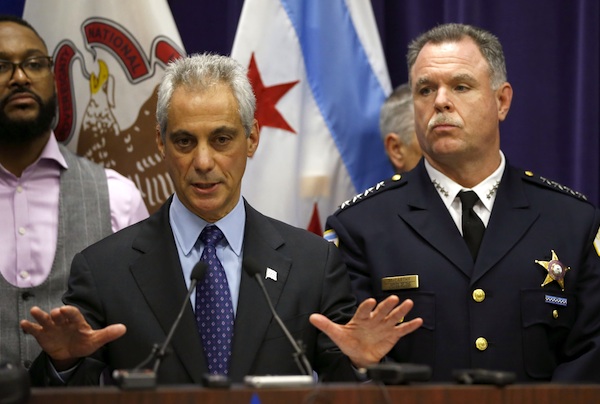 CHICAGO (AP) — Mayor Rahm Emanuel's promise to release videos of police shootings in no more than three months was touted as a way to bring more transparency to Chicago after the city took more than a year to make public the footage of a teenager's death.

But skeptics question why Chicago needs so long to release the same type of videos that Cincinnati and Seattle already make public within days, if not hours.

That has sown doubts that the new practice will do little to restore the trust that was damaged when the public saw the now-famous video of a white officer firing an entire magazine into Laquan McDonald, who was black, as he appeared to walk away from police.

The policy announced Tuesday calls for all videos to be released within 60 days. The deadline could be extended to 90 days if law enforcement requests a delay.

"That just gives them time to alter the video, do something to it, change the dates, maybe delete some things," said April Cross, who lives in a predominantly black neighborhood on the city's West Side. "That's not giving people in the community faith in the police department at all."

Emanuel, in a statement, said the policy "strikes a better balance of ensuring transparency for the public while also ensuring any criminal or disciplinary investigations are not compromised."

Though most of the attention will be on dashcam videos, the policy also calls for the release of any video — public or private — collected by authorities during investigations, as well as audio recordings and police reports.

The mayor fought against the release of the McDonald video, and recently released emails revealed an intense interest in his office with how the story was playing in the press.

One activist said the policy is more about influencing damaging news coverage than achieving transparency.

"The 60 days is so the administration can get ahead of the story, to give them time to come up with a PR strategy ... and cook up a story on how they are going to massage what is on the video and serve it to the public," said William Calloway, a leader in the legal fight with the city over the McDonald video.
Craig Futterman, a University of Chicago law professor who argued for the video's release, doesn't go that far. But he wonders how much good the new policy will do.

"There is no way this is not an improvement. ... But I see it as an insufficient step if the goal is to earn trust," Futterman said. "To establish trust, that means being honest from the beginning, not 60 days, 90 days later."

Sergio Acosta, a former federal prosecutor who helped craft the policy, said the 60-day deadline does that.

"Basically, we wanted to give investigators sufficient time to do what they needed to do in terms of interviewing people and gathering other evidence that would not be tainted by a release that is too early," said Acosta, who is also a member of a task force Emanuel created after the release of the video to make recommendations on how to reform the police force.

The new policy also lets the public know that the days of keeping evidence a secret indefinitely are over, and it puts investigators on notice that the clock is ticking, he said. If police ask for an additional 30 days, those requests must be made in writing and will be made public along with videos and police reports.

Acosta also said he does not expect all the releases to take 60 or 90 days. Some will come out much quicker.

Other big-city departments already get videos to the public far sooner. In Seattle, the police department released dashcam video last month of police shooting a knife-wielding man the day after it happened. It was the same Thursday in Cincinnati, where the day after police shot and killed a man they say was reaching for a gun, they released cellphone video shot from a nearby car in a mere 17 hours.

If the city holds video for two or three months, "people are going to think the video is bad for the cops," said Michele Earl-Hubbard, a Seattle-based attorney and advocate of government transparency. "They know if you wanted to, you could release it sooner (so) they are going to see waiting as hiding something."

The policy calls for the city to create an online portal for video, audio and police reports. But it will be a few months before the portal is up and running, according to Emanuel spokesman Stephen Spector.