How to Stop Trump? GOP Leaders Search for a Way 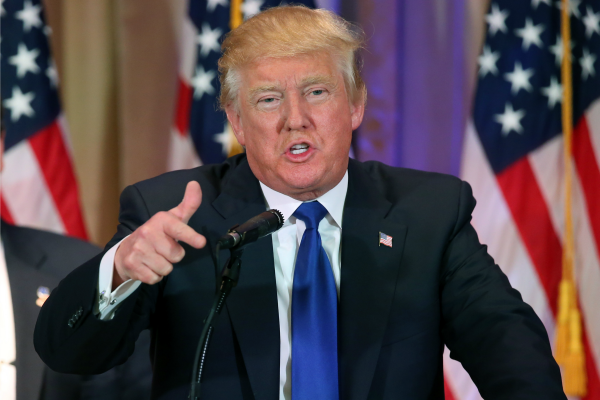 Overshadowed by Trump's wins, Ted Cruz came in a close second in the night's delegate haul, thanks to a win in his home state of Texas. The strong showing bolstered the senator's case to be the party's Trump alternative, even as rival Marco Rubio vowed to continue his fight.

The unrelenting division represented the biggest crisis for the GOP in decades, with the party seemingly on track to nominate a presidential candidate it can't contain. Some party leaders are considering the once unthinkable option of aligning behind Cruz, whom many dislike, while others are talking of a brokered convention. Some influential outsiders even raise the option of forming a new party.

Though convention fights are much more talked about than actually occur, an Associated Press delegate count indicates Trump will have to do better in upcoming contests to claim the nomination before the party's national gathering in July. So far, he has won 46 percent of the delegates awarded, and he would have to increase that to 52 percent in the remaining primaries.

The GOP mayhem contrasts sharply with the increasing cohesion on the Democratic side, where Hillary Clinton locked down solid victories in seven states and was on the path to regaining her status as the inevitable nominee. Clinton's dominance with black voters carried her to wins across the South. Still, Bernie Sanders picked up wins in his home state of Vermont as well as Minnesota, Oklahoma and Colorado, and he said he would fight on.

The Democratic drama paled in comparison to the existential questions Republicans wrestled with in the wake of the most significant election night of the primary. Trump won handily in states as politically opposite as Massachusetts and Alabama, a sign of his broad, outsider appeal and energizing impact on voter turnout.

Despite Trump's commanding victories, many Republican leaders remained deeply skeptical he could beat Clinton in a head-to-head matchup in November — and some questioned whether they'd want him in the White House if he did. They turned to the sort of "break glass" options once thought impossible.

"Ted Cruz is not my favorite by any means," Sen. Lindsey Graham, a former candidate whose disdain for his Texas colleague is well known, told CBS News. "But we may be in a position where rallying around Ted Cruz is the only way to stop Donald Trump and I'm not so sure that would work."

Still, Graham also cast doubt on whether elder GOP statesmen could wrest hold of the situation.

"At what point do you realize the Republican Party is unorganized -- like the Democratic Party? There's no secret group of people," he scoffed.

The comments came as #NeverTrump hashtag spread across Twitter and an anti-Trump Super Pac released a new online video and said it would increase its daily attacks ahead of primaries on March 8 and March 15. Our Principles PAC latest attack blasts Trump for not clearly repudiating David Duke, a onetime KKK member who endorsed Trump's campaign.

"It may be necessary for men and women of principle within the party to set the self-detonation sequence as they escape the ship to a new party," wrote conservative blogger Erick Erickson. Erickson was among those calling on the party to coalesce around Cruz.

In his victory speech, Trump sent a clear message to the GOP establishment, warning to House Speaker Paul Ryan, who had declared earlier Tuesday that "this party does not prey on people's prejudices," that if the two don't get along, Ryan is "going to have to pay a big price."

Delegate math would seem to underscore the problem for Republicans who reject Trump.

The math was also tough for Sanders. Clinton was assured of winning at least 457 of the 865 delegates at stake Tuesday. Sanders gained at least 286. When including party leaders, Clinton has at least 1,005 delegates and Sanders has at least 373. It takes 2,383 to win the nomination.

Top Sanders advisers argue that Super Tuesday was the best day on the primary calendar for Clinton. But the map will get more difficult for her moving forward, said Sanders senior adviser Tad Devine.