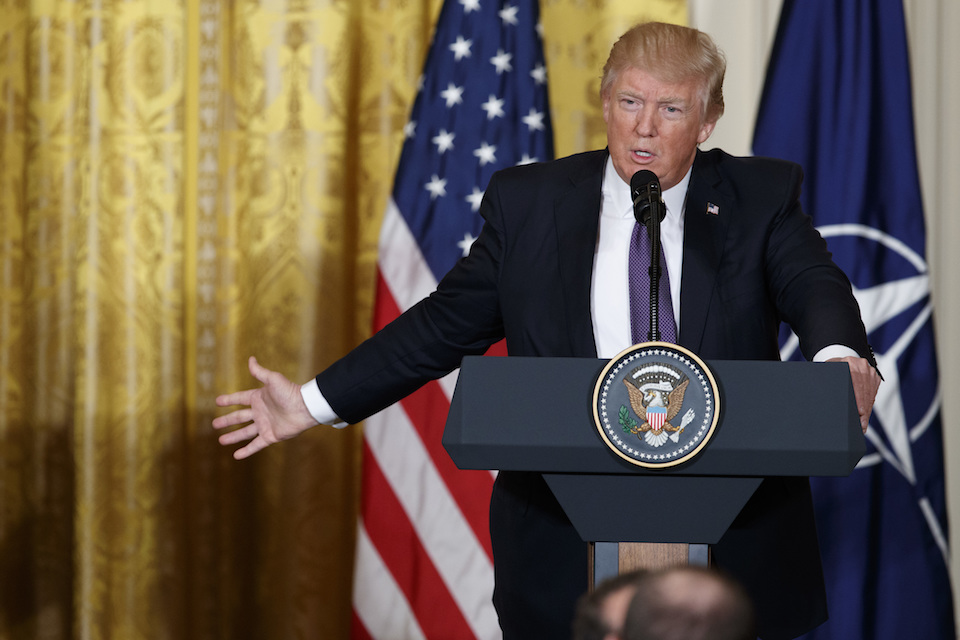 It was a flip-floppy week at the White House as President Donald Trump walked away from some promises and people, contorting reality in the process.

He declared NATO no longer obsolete, even though the alliance hasn't changed much since he denigrated it in the 2016 campaign.

He credited China with ceasing the manipulation of its currency, swerving away from a campaign pledge with a belated acknowledgment that China had changed its ways.

The president's chief strategist, Steve Bannon, joined a list of people Trump has claimed to know well until he said he didn't. Russian President Vladimir Putin is on the list, too, as he has been for some time.

"I don't know Putin," Trump said in characterizing U.S.-Russia relations as the worst ever. He'd bragged in 2015, "I got to know him very well."

As he performed such acrobatics to explain a series of shifts, Trump also committed several more familiar sleights of rhetoric, taking credit where it isn't due in job growth and corporate expansion.

A look at some of his statements this past week:

TRUMP: "The secretary-general and I had a productive discussion about what more NATO can do in the fight against terrorism. I complained about that a long time ago and they made a change, and now they do fight terrorism. I said it was obsolete. It's no longer obsolete." — news conference Wednesday with NATO Secretary-General Jens Stoltenberg

THE FACTS: NATO has not substantively changed its mission as a result of Trump's campaign-season complaints.

As evidence that NATO is heeding his call to be more aggressive on terrorism, Trump has cited a NATO decision last year to establish a high-level intelligence coordinator that could make the alliance more nimble in responding to threats.

But that position was in the works during the Obama administration and came about because of worries about Russian aggression as well as from a desire to respond more effectively to the Islamic State group. It wasn't in response to Trump.

THE FACTS: More than almost?

First, Trump is taking credit for three months of job creation even though he wasn't president for two-thirds of January.

Second, the economy doesn't turn on a dime — or an inauguration. Over time, his predecessor's influence on the economy wanes and Trump's grows.

Third, he took actual job growth and rounded it up — way up.

The economy added 533,000 jobs in the first three months, not the 600,000 claimed by Trump on several occasions. That's a monthly average of 178,000 jobs. President Barack Obama's pace was slightly better last year: 187,000 jobs per month on average.

TRUMP: "We may be at an all-time low in terms of relationship with Russia." — news conference Wednesday

THE FACTS: Arguably true in the post-Soviet era. Not so during the decades of the Cold War, shadowed by the threat of nuclear annihilation.

The U.S. and the Soviet Union were on the verge of a nuclear conflict in October 1962 during the Cuban Missile Crisis.

Tensions also were high after a U.S. U-2 spy plane was shot down over Russia and its pilot, Gary Powers, was imprisoned and tried for espionage. And the U.S. helped militants fight the Soviets in Afghanistan in the 1980s.

TRUMP: "Toyota just announced that it will invest more than $1.3 billion ... into its Georgetown, Kentucky, plant, an investment that would not have been made if we didn't win the election." — to CEOs on Tuesday.

THE FACTS: Trump's election was not the spark for the investment. Toyota said the announcement was the culmination of plans in the works for at least four years.

They were leaving — if I didn't win this election, you would have lost your car industry to Mexico and to other countries.

They're not leaving anymore, believe me. There's retribution if they leave. There was no retribution." — Fox Business Network interview, broadcast Wednesday

THE FACTS: The only "retribution" he has meted out has come on Twitter and in other rhetorical forms. He hasn't signed any laws or instituted rules to punish fleeing industries. In fact, Ford Motor Co. is still planning to move small car production from Michigan to an existing plant in Mexico next year.

TRUMP, on his chief strategist, Steve Bannon: "I like Steve, but you have to remember he was not involved in my campaign until very late.

I had already beaten all the senators and all the governors, and I didn't know Steve.

I'm my own strategist, and it wasn't like I was going to change strategies because I was facing crooked Hillary." — Interview on Tuesday with the New York Post.

THE FACTS:  Trump shortchanges his relationship with Bannon in an apparent effort to downgrade his importance.

David Bossie, who was deputy campaign manager, told The Associated Press after Trump took office that Bossie had introduced Trump and Bannon in 2011 at Trump Tower and they had grown close. Bannon interviewed Trump at least nine times in 2015 and 2016.

In August 2016, when the Trump campaign announced the hiring of Bannon as campaign CEO and the appointment of Kellyanne Conway as campaign manager, its statement quoted Trump as saying: "'I have known Steve and Kellyanne both for many years."

THE FACTS: Trump's claimed familiarity with Putin has waxed and waned according to political circumstance.

It waxed when it served his interest to demonstrate comfort dealing with world leaders.

"I got to know him very well because we were both on '60 Minutes,' we were stablemates, and we did very well that night," he said in November 2015.

Actually, Putin spoke from Moscow and Trump from New York and appeared in separate segments of the show.

It waned when Trump's frequently admiring comments about Putin became a liability and Russia's alleged interference in the U.S. election came to light. "I never met Putin, I don't know who Putin is," he said in July, and essentially ever since.

The two spoke by phone Jan. 28, when Putin congratulated the new president.

TRUMP on his decision to attack a Syrian air base: "What I did should have been done by the Obama administration a long time before I did it, and you would have had a much better — I think Syria would be a lot better off right now than it has been." — Fox Business interview.

THE FACTS: Trump may think that now, but he certainly didn't three years ago when Obama was contemplating retaliation following a deadly chemical weapons attack in a Damascus suburb.

Among several tweets he sent advising against a strike: "President Obama, do not attack Syria. There is no upside and tremendous downside. Save your powder for another (and more important) day!"

THE FACTS: Here Trump finally catches up with reality. During the campaign he pledged to brand China a currency manipulator, a move that would set the stage for trade penalties.

China had once devalued its currency to make its exports artificially cheaper, crowding out other countries' products, but in recent years has let market forces do more to shape currency exchange rates.

When Trump railed against Chinese currency manipulation in the campaign, there were signs that China was actually taking steps to keep the value of the yuan from sinking further against the dollar.

Trump didn't let go of his accusation easily. As recently as April 2 he told The Financial Times that the Chinese are "world champions" of currency manipulation.

TRUMP: "I think we're doing very well on health care. It's been very much misreported that we failed with health care." — Fox Business interview

THE FACTS: By any objective measure, that's sugar-coating a faltering health care initiative.

The problem: disagreements among GOP hard-liners and moderates, and no Democratic support. Since then, negotiations have led to some tweaks, but no apparent breakthroughs.

That's not to say he can't succeed on another try. But after the bill flopped, an AP-NORC Center for Public Affairs Research poll found that among seven major issues tested, the president got his worst rating on health care. About 6 in 10 disapproved of Trump's handling of the issue.