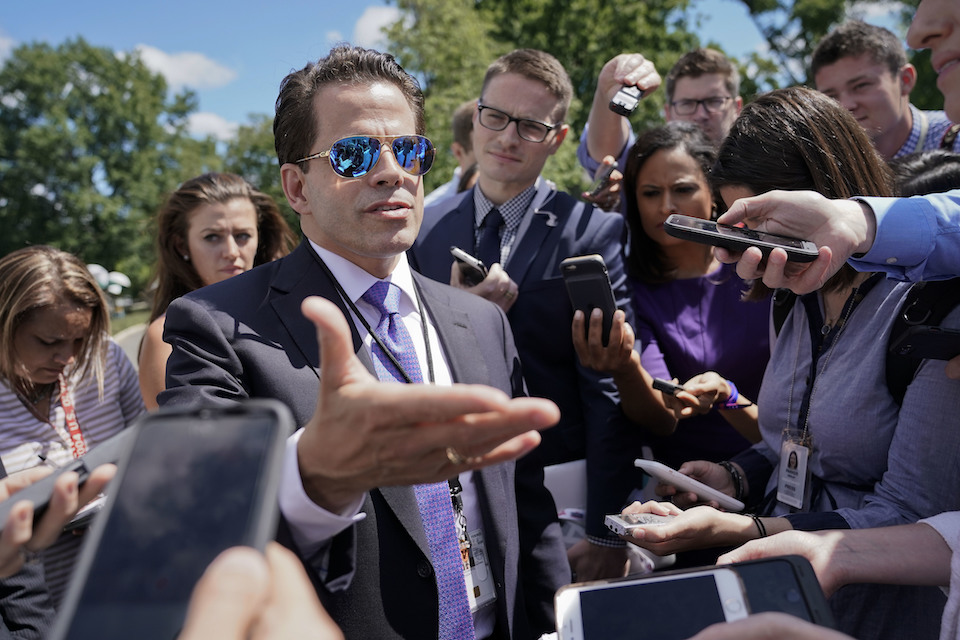 WASHINGTON (AP) — Talk about a team of rivals.

This past week wasn't a high point for veracity in Washington. President Donald Trump tormented his own attorney general for days, the White House was rocked by the new communications chief's distinctly unusual way of communicating and the chief of staff was out.

Some wildly off-base assertions flew in these matters.

But truth was stretched in other ways, too.

Perhaps lost in the cover-your-ears din of infighting, Trump made a series of claims about improved services for veterans that are at odds with his government's statistics and the experience of many patients exposed to Department of Veterans Affairs health care.

A look at some statements over the past week:

TRUMP: "Problem is that the acting head of the FBI & the person in charge of the Hillary investigation, Andrew McCabe, got $700,000 from H for wife!" — tweet Tuesday.

THE FACTS: That's wrong. McCabe's wife, Jill McCabe, did not get $700,000 in donations from Hillary Clinton ("H" in the tweet) for a Virginia state Senate race in 2015. Jill McCabe got the money from Virginia Gov. Terry McAuliffe's political action committee and the Virginia Democratic Party. Those donations happened before the FBI says McCabe was promoted to deputy director of the FBI and took a supervisory role in the Clinton email investigation. He became acting director in May after Trump fired James Comey.

THE FACTS: Trump is entitled to be dissatisfied with his attorney general but there's a backstory. If Sessions has been quiet about Clinton, it's because the election is over and he promised during his confirmation hearings in January to step aside from any investigation of her. As a Trump campaign loyalist last year, he was a critic of the Democratic nominee and said in January that his objectivity could be in question if he was involved in any Justice Department action concerning her email practices as secretary of state.

Trump is also upset that Sessions stepped aside from the investigation into possible collusion between Russian officials and the Trump campaign.

The effect of those recusals is to leave Trump potentially more exposed to Justice Department professionals who do not have political ties to him.

ANTHONY SCARAMUCCI, White House communications director: "In light of the leak of my financial disclosure info which is a felony, I will be contacting @FBI and the @JusticeDept" — tweet Wednesday, later deleted.

THE FACTS: His financial disclosure was not leaked — illegally or otherwise. It is a public record.

It was released after a public records request by a Politico reporter to the Export-Import Bank, where Scaramucci had been employed at a senior level since mid-June. The Associated Press subsequently obtained the same financial disclosure Thursday. A reporter filled out a publicly available form, turned it in at the bank's office and was emailed a copy of Scaramucci's financial disclosure a half hour later.

In a feuding White House, Scaramucci appeared to blame chief of staff Reince Priebus for leaking the information, by attaching Priebus' handle to the tweet. Scaramucci then denied he was blaming Priebus. Then The New Yorker published an interview with Scaramucci in which he went on a profane tirade against Priebus, calling him "paranoid schizophrenic" and pledging to get him and others fired. Scaramucci made vulgar comments about White House chief strategist Steve Bannon as well.

After all this, Trump announced he was replacing Priebus with Homeland Security Secretary John Kelly. 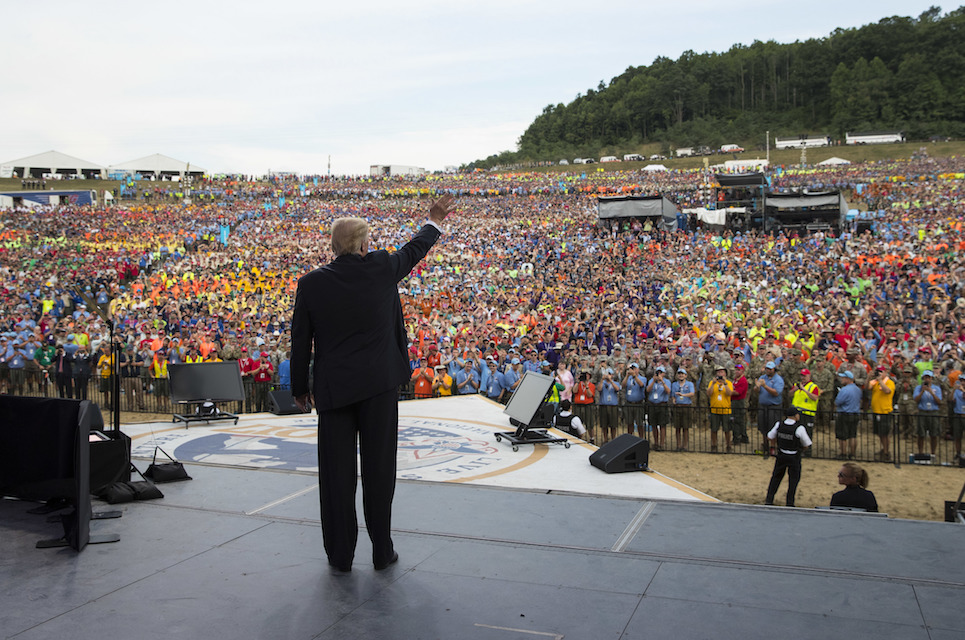 TRUMP: "Lebanon is on the front lines in the fight against ISIS, al-Qaeda and Hezbollah." — at news conference Tuesday with Lebanese Prime Minister Saad Hariri.

THE FACTS: Depends how you define very shortly. The U.S. Energy Information Agency said in January the country could become a net energy exporter by 2026 if trends remain. The White House said in its own report last month it could happen as soon as 2020 but did not substantiate the claim.

As a net exporter, the U.S. would still import oil, natural gas and other energy sources but send abroad more than it buys.

THE FACTS: Actually, most Americans frown on Trump's Twitter conduct and most Republicans do not find his tweets refreshing, according to a recent Washington Post-ABC News poll. In all, two-thirds of people find his tweets "inappropriate" and "insulting" and about half said they're "dangerous," the poll found. One-third said they are effective.

TRUMP: "We've begun to process seamlessly transferring veterans' medical records. Horrible situation. You couldn't get your medical records. And now it's so easy and so good. And the system is fixed, finally, after all of these years."

THE FACTS: That IT system is not fixed. The multiyear effort has barely begun. The costs are not even accounted for in Trump's proposed 2018 budget. The VA expects its outmoded scheduling system to remain for several more years.

TRUMP: "We have Choice. ... We have nearly doubled the number of veterans given approvals to see the doctor of their choice."

THE FACTS: He's exaggerating the progress on this front. Trump is referring to the VA's Choice program, which offers federally paid medical care outside the VA. Put in place after a 2014 wait-time scandal at the Phoenix VA, the program allows veterans to see outside doctors if they must wait more than 30 days for an appointment or drive more than 40 miles to a VA facility.

The department's approvals to veterans to use Choice have grown under Trump, but they haven't nearly doubled. VA Secretary David Shulkin wrote in a recent USA Today editorial that outside care programs for the first half of the year increased 26 percent over the same period last year. The program is also running out of money and will need an emergency replenishment by Congress to head off disruptions in care.

TRUMP: "We've published wait times at every VA facility. I used to go around and talk about the veterans and they'd stand on line for nine days, seven days, four days ... 15 days. People that could have been given a prescription and been better right away end up dying waiting on line. That's not happening anymore."

THE FACTS: Problems of delay or substandard care at some of the VA facilities have not disappeared. On access, the VA reported recently that veterans have been waiting more than 60 days for new appointments at about 30 VA facilities nationwide.

On quality of care, the VA's inspector general issued urgent action reports in April and May warning that patients at Washington's VA medical center were being put at unnecessary risk of harm due to bad inventory practices, like potentially dirty syringes and medical supply shortages.

THE FACTS: This may be the case, but it happened before Trump took office. By late 2016, the department's blog announced that the goal of providing same-day primary and mental-health care when medically necessary would be achieved at every VA medical center by year's end. Shulkin told Congress in late January the services already were fully in place.

TRUMP: "Our military must be focused on decisive and overwhelming victory and cannot be burdened with the tremendous medical costs and disruption that transgender in the military would entail." — tweet Wednesday saying transgender troops would be banned from the armed forces.

It estimates that out of about 1.3 million active-duty military personnel, 2,450 are transgender. Only a subset would seek transition-related care, such as hormone therapy and sex-reassignment surgery. Based on private insurance data, the study estimates a minimal increase in costs from such care for the active-duty armed forces — no more than 0.13 percent, or $8.4 million annually.

As for disruption, members representing less than 0.1 percent of the total force would seek transition-related care that could affect their deployments, the study says.

The Pentagon says it is allowing transgender troops to remain in uniform and not changing its policy otherwise until Defense Secretary Jim Mattis receives an authoritative directive on what to do.

TRUMP: "As I said from the beginning, let ObamaCare implode, then deal." — tweet Friday.

THE FACTS: He didn't say that from the beginning. During the 2016 campaign, he promised to "immediately repeal and replace" Barack Obama's health care law, as he put it on one tweet from last year. He did not propose to let the law fail, then follow up with a new package.

TRUMP: "Democrats, they win in Youngstown. But not this time. Right? They started to get a little nervous at the beginning of that evening when they said Youngstown seems to be going the other way. That hasn't happened in a lot of decades." — Youngstown speech.

THE FACTS: Trump errs in claiming that 2016 election victory in Mahoning County, where Youngstown is situated. He did a lot better in the county Mitt Romney did in 2012, but he still lost to Clinton by 3 percentage points — 50-47. Romney lost to Obama by 29 percentage points there in 2012.