A Year After Kaepernick's Protest America is Still in Turmoil 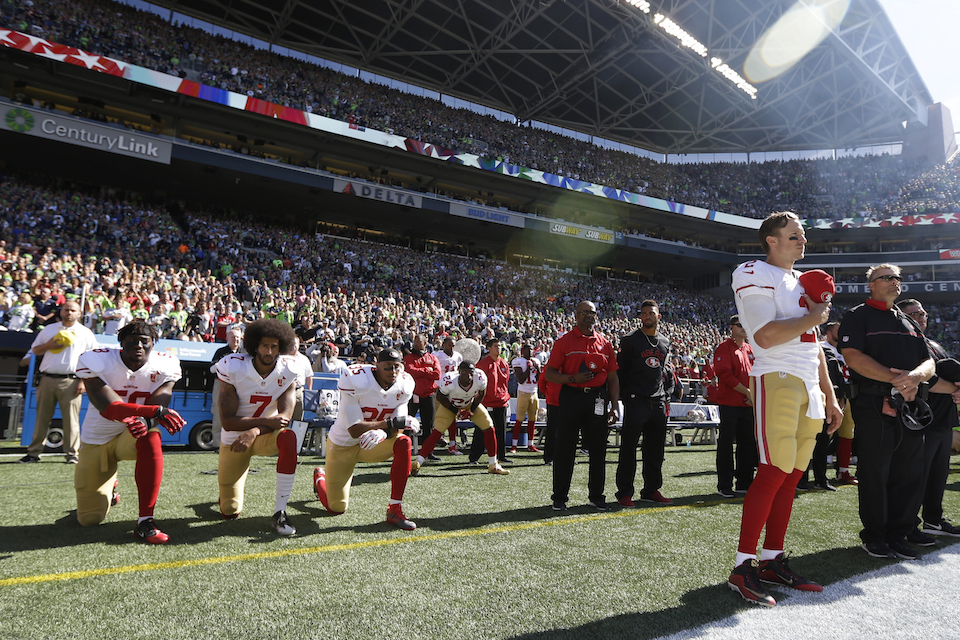 What started as a protest against police brutality has mushroomed a year later into a divisive debate over the future of a football player who refused to stand for the national anthem and now faces what his fans see as blackballing for speaking out in a country roiled by racial strife.

Supporters of former San Francisco 49ers quarterback Colin Kaepernick demonstrated outside the Los Angeles Rams' Aug. 12 preseason opener against the Dallas Cowboys, part of calls for boycotts of the upcoming NFL season. Film director Spike Lee is promoting a rally on his behalf.

On the opposing end of a wide range of opinions, some fans say Kaepernick shouldn't have sat or kneeled during the national anthem, while others argue the quarterback's lack of a job is more about his talent.

The once-rising star and Super Bowl quarterback has been unemployed since March, when he opted out of his contract and became a free agent who could sign with any team. At least three NFL clubs have openly discussed the idea of signing him, but the embattled quarterback has yet to sign a contract with training camps well underway.

Just weeks away from the regular season, he has become a symbol of the clash of celebrity, sports and social issues as more people —including players, fans, politicians, team owners and pundits — invoke his name to debate thorny issues of patriotism and race.

Other prominent NFL players have sat out or demonstrated during anthems this preseason, one saying his decision was bolstered by a recent white supremacists' rally in Virginia that turned deadly.

"There's a lot going on inside people's hearts right now," said Dan Rascher, a sports business professor at the University of San Francisco. "This may have been a catalyst for that even though it's not about Colin Kaepernick, but about our country and who we are."

Other players who joined Kaepernick in protest are still employed. Philadelphia Eagles safety Malcolm Jenkins pledged to continue his protests this season, tight end Martellus Bennett signed a free agent contract with the Green Bay Packers and linebacker Brandon Marshall stayed with the Denver Broncos even as he lost two endorsements for kneeling during the anthem.

Still, some fans say they believe Kaepernick has been passed up as punishment for his actions, which initially went unnoticed until the third preseason game last year.

< p>The chorus gets louder every time a quarterback vacancy is filled on an NFL team, such as when the Miami Dolphins brought 34-year-old quarterback Jay Cutler out of a short-lived retirement to lead its franchise. Cutler was out of work — like Kaepernick, Robert Griffin III, and others — and planned to work as a television analyst before the Dolphins reunited him with coach Adam Gase.

"Either some owners and/or the NFL are punishing him for speaking out, or they've decided that it's best for business to sweep these valid issues under the rug in order not to upset fans who, in our opinion, don't have a valid reason to be upset about Colin Kaepernick being on their team," said Tim Clark, who is organizing boycotts of all 32 teams for the NFL's regular season opener.

Color of Change, an online civil rights organization, flooded Baltimore Ravens headquarters with telephone calls when the team didn't quickly sign him as it openly considered options to react to an injury. The Los Angeles chapter of the National Action Network, which demonstrated over the weekend, says it will boycott the Rams and Chargers games at Memorial Coliseum. A change.org petition calling for a season-long boycott of the NFL has collected more than 170,000 signatures.

Elie Mystal, an editor at the "Above the Law" legal commentary website, agreed with the proposed boycotts.

"Kaepernick doesn't have a job because he spoke out about race," Mystal said. "That's the thing you're not allowed to do in our sporting culture and most of our popular culture, unless you're so over-the-top talented that they need you for winning."

Seattle Seahawks defensive end Michael Bennett, Martellus Bennett's brother, sat during the singing of "The Star-Spangled Banner" for the second straight week on Friday. He was joined by two teammates standing by him. Bennett said the death of a young woman protesting white supremacists in Charlottesville, Virginia, underscored his decision.

Some fans say Kaepernick has not been signed because he's had an inconsistent career. He played in the 2013 Super Bowl but faded in the seasons leading up to the protests, winning just three games in his last 19 starts.

He had two seasons where he was the starting quarterback for all 16 of his team's games, including the 2014 season that ended with San Francisco missing the playoffs. He suffered from a shoulder injury for half of 2015 and began the 2016 season as a backup, then started 11 games. The 49ers finished in last place for the second season in a row.

"Do these people (complaining) about Kaepernick going unsigned not understand that he sucks, and he's a liability/distraction?" tweeted Joe Patterson, a business management major at the University of North Carolina, Charlotte.

"He's very polarizing and much more in the consciences of the general population as well as sports fans and, creating, I would think, a pretty big dilemma for the NFL teams as to where he's going to go," Schafer said.

The fallout wasn't all negative: Kaepernick inspired a movement as high school athletes across the country kneeled during the anthem. Kaepernick had the 17th highest jersey sale in May and came in 39th in all merchandise from May through July 31. He's the only player in the top 50 in sales without a job.

Kaepernick, who is white and African-American, took a stand that was unpopular among many whites, which is what boxing great Muhammad Ali did when he refused to be drafted into military during the Vietnam war.

Ali was convicted of draft evasion, which was later overturned, banned from boxing and stripped of his heavyweight title.

It's uncertain how history will treat Kaepernick. But just as Ali was linked to the "black power" movement, Kaepernick has become linked with the Black Lives Matter movement, says Soyica Diggs Colbert, a Georgetown University professor who is writing a book on black movements.

"When we think about how Black Lives Matter as a political movement gets woven into sports," Kaepernick's certainly the key figure in that conversation, she said.