How Black Women are Organizing to Energize Voters this Fall 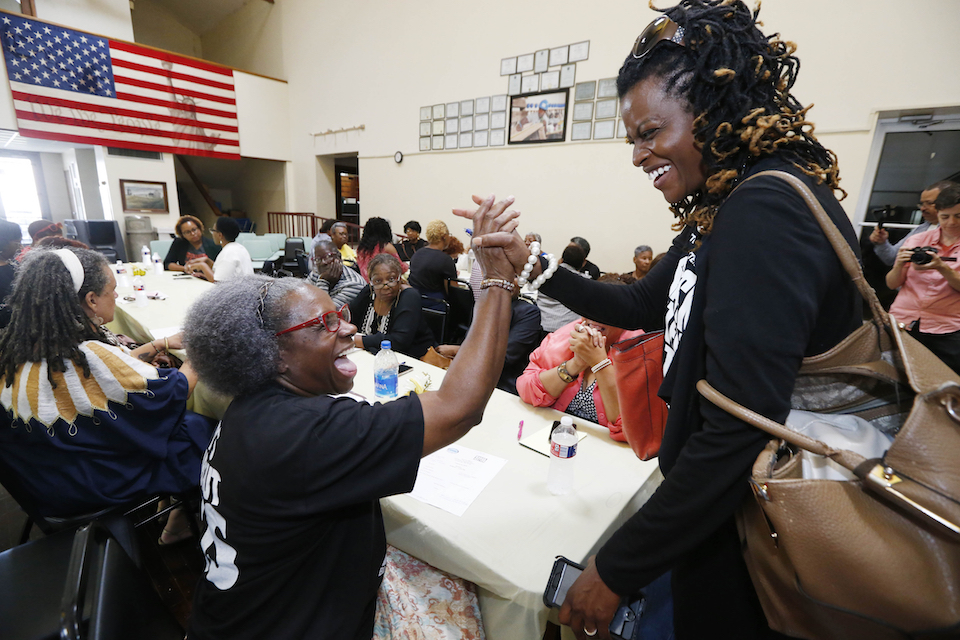 JACKSON, Miss. (AP) — Meeting on the campus of Jackson State University on a recent Friday afternoon, dozens of black women came together to strategize about the upcoming midterm elections, opening the gathering with a freedom song.

"The revolution done signed my name," they moaned, invoking the names of the ancestors whose strength has willed them to persevere: Harriet Tubman. Shirley Chisholm. Aretha Franklin. Two were like them, daughters of Mississippi: Ella Jo Baker. Fannie Lou Hamer.

"All of us who are in the room right now are midwives for transformation," said Rukia Lumumba, daughter of the late Jackson Mayor Chokwe Lumumba, and co-founder of the Electoral Justice Project.

The impact of such targeted work is evident. Black women went to the polls in record numbers last December to elect Doug Jones as the first Democratic senator from Alabama in 25 years.

As of this week, 39 black women are nominees for the U.S. House in the November midterms, including 22 women who aren't incumbents.

The meeting soon shifted to strategy as the women plotted how to harness the energy of black female voters this fall.

Scenes like these are playing out across the country as black women convene at schools, churches and homes to plan how to make sure that black voters — particularly women — are aware of the upcoming elections, registered and planning to vote and that their family members will do the same.

It's all part of an effort to reshape the politics of the Trump era when many black voters feel threatened by the country's increasingly racially polarized climate, with concerns ranging from access to the ballot box to the president's hostility to protesting NFL players and the violent demonstrations last summer in Charlottesville, Virginia.

Pressley and Abrams could make history

Others have started political action committees to provide financial resources to candidates such as Stacey Abrams, the Democratic nominee for governor in Georgia.

If she wins in November, Abrams would become the first black female governor elected to lead a U.S. state.

The Mississippi gathering was part of a stop on a tour across the Deep South organized by LaTosha Brown, co-founder of the Black Voters Matter Fund, which aims to increase political power in black communities.

Brown said the time is now for black women to lead again. She pointed to incidents like the attempt to close a majority of polling places in Randolph County, Georgia, last month, as proof of the need for the kind of continued vigilance black women have long provided.

"This is what we do," she said. "We want to take it to another level. We see what's happening in this country. 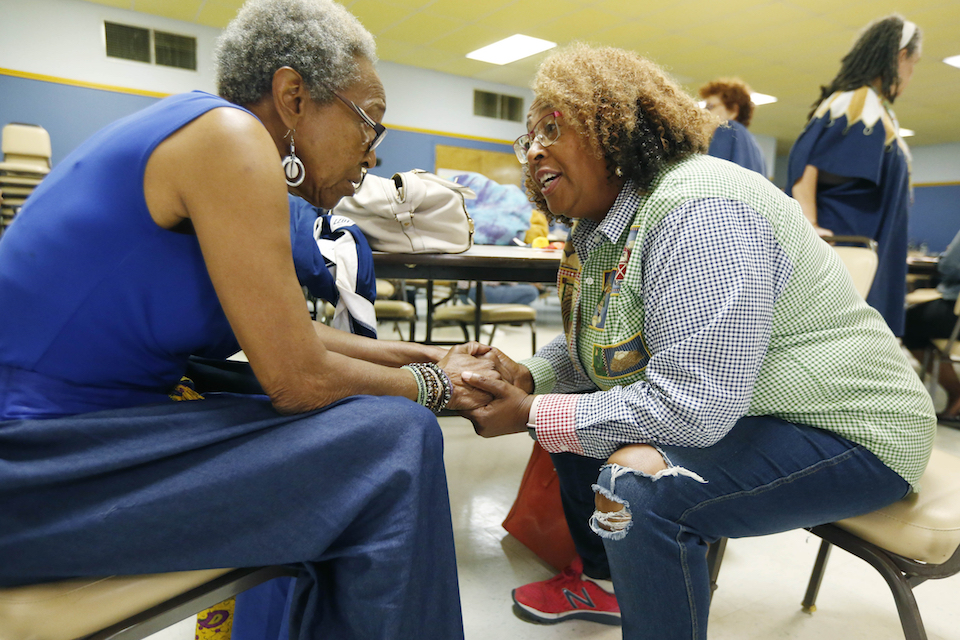 Cindy Ayers, CEO of Foot Print Farms, right, confers with her friend Imalika Adams Johnson, a veteran of the civil rights movement, at a Black Women Matter Issues Forum of several Mississippi grassroots political organizations with the Black Voters Matter Fund field team in Jackson, Miss. Aug. 24, 2018. Black women are collaborating across states and across the country to maximize their efforts. Many have worked together on previous campaigns or on other grassroots projects in black communities, bringing a familiarity to the work they now share. (AP Photo/Rogelio V. Solis)

The goal? Black candidates in power

Headed into November, black female organizers are hoping to elect more African-Americans to power and not simply be a reliable voting block for white Democrats.

In Alabama, "black women were looked to, to bail out Democrats and the state from a very problematic candidate," said Glynda Carr, co-founder of Higher Heights for America, which focuses on electing black women and galvanizing them as voters.

"Alabama was this tipping point around black women's leadership, when we woke up to our Twitter feed going crazy. The broader community recognized black women are the building blocks to a winning coalition."

No time to play

Rhonda Briggins has long worked in politics but never considered herself "a money person" until this year. Briggins co-founded R.O.S.E.-PAC, short for Raising Our Sisters' Electability, and started the Sisters Supporting Sisters campaign this summer, with the goal of getting 100 women at a time to donate $100 each.

Her pitch is simple: When black women go to the hair salon, she asks them to talk to other women about the midterms and about the importance of voting.

Along the Black Voters Matter Fund tour, Briggins told a crowd of black women organizers in Stockbridge, Georgia, "This is not a time for us to play."

"So many times we have good sisters on the ballot and they don't have the resources," she said.

"We've come together . we need people to educate everyone. We're just trying to find grassroots ways to organize African-American women. We have been always behind the scenes."

Fallon McClure, who was sitting in the audience, agreed.

"For the longest time, there's been a lot of white-led organizations, and there'd be a sprinkling of women of color, but now it's starting to be women of color-led organizations," said McClure, state director for Spread the Vote, started by a black woman, which is working in states with voter ID laws to get free identification cards.

"Even in organizations that are still white-led, we're seeing their whole organizing crew is starting to be black women and other women of color," she continued.

"They've been doing the work for a long time but weren't necessarily getting the credit, or they had a regular, full-time job, and they were just kind of doing the work on the side because they cared about their community and wanted to make a difference, but now they're getting the recognition for it."

We can do amazing things

Black women are also collaborating across states and across the country to maximize their efforts. Many have worked together on previous campaigns or on other grassroots projects in black communities, bringing a familiarity to the work they now share.

As the Black Voters Matter Fund tour rolled through Mississippi, Kenya Collins and Cassandra Overton Welchlin chatted easily in their seats, each tooting the other's horn and finishing the other's sentences. Because there are so few black women on the ground, Collins explained, they have no choice but to stick together.

"In Mississippi, black women have always been about community," said Overton Welchlin, co-convener of the Mississippi Black Women's Roundtable.

"If we can shift the power to get black women to show up for every election, we can do some amazing things. The Bible says that in the multitude of counselors, plans succeed."

We who believe in freedom

For nearly two hours after the bus rolled into Jackson for the final meeting of the day, Brown listened to her sisters in the struggle discussing their work around issues from education to nutrition to reproductive rights.

When it was her turn to speak, she ended her remarks by echoing Baker's most famous line with a renewed urgency:

"We who believe in freedom cannot rest until it comes."

___
Whack is The Associated Press' national writer on race and ethnicity. Follow her on Twitter at http://www.twitter.com/emarvelous.